An urgent scale-up of aid is needed in the northern district of Abs, the area worst affected by Yemen’s cholera outbreak, according to international medical organisation Doctors Without Borders (MSF). The disease is spread by contaminated water, so water and sanitation activities are particularly vital to tackle the problem at source, says MSF.

“In Abs district, our teams are seeing an extremely poor sanitation situation and insufficient access to clean drinking water,” says Gabriel Sánchez, MSF programme manager for Yemen. “This is clearly a main factor in the spread of the current cholera outbreak. Water and sanitation was an issue even before the cholera outbreak, but it is especially concerning now. Either we act now or we will face an even bigger humanitarian crisis in the weeks and months ahead.”

Abs, in Hajjah governorate, registered its first cholera case in late March. Since then, the number of cholera cases has exploded, with MSF’s cholera treatment centre in Abs town receiving as many as 462 patients in a single day – more than anywhere else in Yemen.

With more than 376,000 displaced people among an estimated population of two million, Hajjah hosts more displaced people than any other Yemeni governorate. About a quarter of these are sheltering in Abs district, often living in remote areas without basic services so as to lessen the chance of being targeted by airstrikes or other types of violence associated with the conflict.

In the cholera treatment centres set up by MSF in Hajjah governorate, teams are distributing disinfection kits, which include mops, brooms, and soap and chlorine tablets for purifying water supplies.

“As well as treating patients, their houses need to be disinfected and water sources need to be chlorinated,” says Cristina Imaz, MSF logistics coordinator. “Clean water distribution points need to be set up, and places where people gather – like markets and bus stations – need to be sprayed regularly. However, these activities are not being done systematically at present.”

Since cholera broke out in late-March, MSF has doubled the scale of its emergency response in Abs district. MSF teams in Abs have treated more than 12,200 patients with suspected cholera and acute watery diarrhoea. This figure represents one-fifth of all cases seen by MSF’s teams across nine Yemeni governorates, and nearly five percent of all cases registered across Yemen, according to the World Health Organization (WHO). After two months of exponential growth, the weekly number of cholera cases dropped for the first time in early July, but people with the disease are still arriving for treatment in their hundreds.

Even before the cholera outbreak, MSF teams in Abs rural hospital were seeing substantial increases in emergency consultations, paediatric admissions and surgical interventions. There have also been outbreaks of measles and whooping cough and peaks of malaria – all diseases that should be either limited or controlled. Together, these are a clear sign that Yemen’s health system, desperately short of resources and staff, has collapsed. 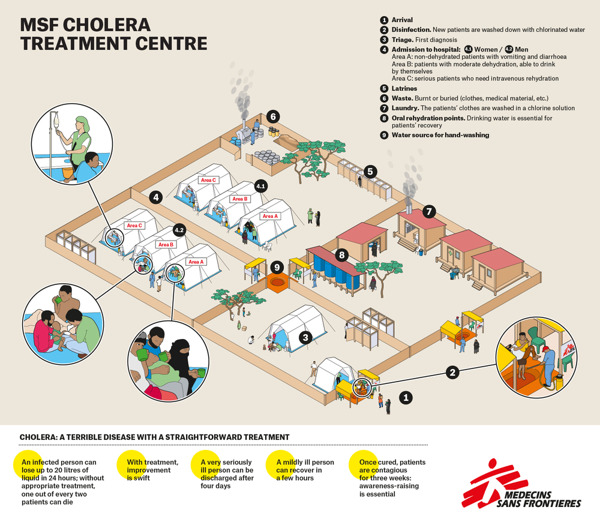