2.) January 10, 2016   Shiara hospital (The missile/rocket hit a corridor leading from the main gate to the hospital buildings, with a metal fence alongside resulting in 6 deaths, 7 injuries). Shiara Hospital is the main medical facility functioning in the town located in the mountains where most of its 40,000 residents are living in caves to shelter from the bombs. The hospital serves about 120,000 people in the area. MSF is now supporting the hospital with medications and money incentives for the Ministry of Health and Population staff. 8,278 patients were treated in the emergency room since January 2016 and 317 severe patients have been referred to the hospitals in Saada.

MSF has been working in 11 hospitals and health centres in Yemen and providing support to another 18 hospitals or health centres in eight governorates: Taiz, Aden, Al-Dhale’, Saada, Amran, Hajjah, Ibb and Sanaa, with nearly 1,600 staff  including 82 international staff - making it among MSF´s largest missions in the world in terms of personnel.

MSF has resumed working in Hajjah and Abs hospital since November 2016. MSF is still supporting the hospitals in Sa’ada with medication, incentives for their Ministry of Public Health and Population (MoPHP) staff and logistic support. MSF operations in Yemen worked had a budget of more than 103 million Euro for 2015 and 2016.

MSF´s support to the Ministry of Health´s HIV programme in Saana continues as normal, with 97% of the programme’s 1,752 patients receiving their life-saving anti-retroviral treatment despite the tensions and violence in the city. These patients do not come only from Sana’a but from several governorates in Yemen. MSF is providing regularly blood testing kits to the National Blood Bank in Sana’a since September 2015.

Since October last year, MSF is supporting dialysis treatment centres in Sana’a, Hajja and Mahweet and recently the dialysis centre in Taiz supporting in total around 650 patients with kidney failure. These patients were at risk of death as the dialysis treatment centres were badly affected by lack of supplies and had reduced their sessions per patient from 3 to 2. MSF is supporting these centres until November 2016 but we need to identify international organizations who are willing support these centres as MSF is focusing on providing life-saving healthcare to the wounded and violence victims in 10 Yemeni governorates in Yemen. MSF brought in 240 ton of medical supplies for this activity alone, budget for 6 months was 1.8 million Euro. MSF supports the centres till December 2016 and ICRC will take over 2 centres. MSF is looking into the possibility to support 3 new centres

Training is part of our regular activities at an Emergency Surgical Hospital in Sheikh, Aden hospital in which MSF provide on- job- training to MoH doctors and nurses. We have one doctor and two nurses at a time. We started this activity in February and we trained 14 doctors and nurses so far. An official training programme supported by the David Nott Foundation, validated by the Royal College of Surgeons of England ran for three days early July. We had around 40 surgeons attending the course, from our hospital, from other hospitals in Aden, and from hospitals in Lahj, Abyan, Lawder and Shabwa.

MSF’s Call – what has to happen next?

MSF is concerned that the civilians are paying an extremely high price in this conflict. The impact of violence on people’s physical and emotional well-being cannot be underestimated. We see people in our medical facilities with terrible stories of what happened to them, and even children coming to ask for help because they have lost their parents in the fighting.

MSF teams are treating a large number of people for acute post violence stress syndrome. Patients report generalised symptoms such as body pain, headaches and chest pains as a result of the physical and mental trauma they have endured.

We call on humanitarian actors present in Yemen to scale up humanitarian aid and ensure that food is delivered to those in need and unhindered health care is provided.

We also call on all parties to the conflict to respect the International Humanitarian Law which guarantees  the protection of civilians, medical personnel and facilities.

The hospital bombings in Yemen have shown that the current Saudi-Led Coalition (SLC) rules of engagement, military protocols and procedures are inadequate in avoiding attacks on hospitals and need revision and changes.

MSF asks the Saudi-led coalition and the governments supporting the coalition, particularly the U.S., U.K. and France, to ensure an immediate application of measures to substantially increase the protection of civilians. 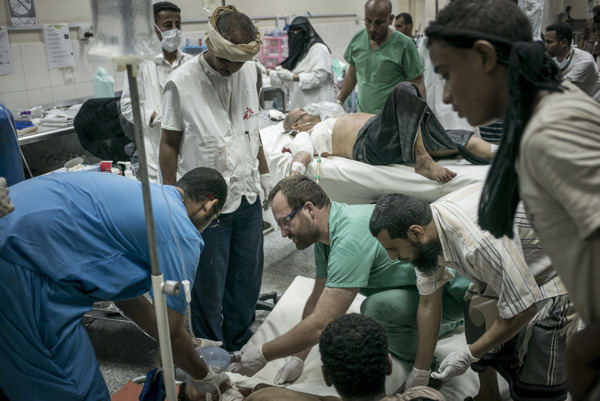