Friday, December 1, 2017 — Doctors Without Borders (MSF) in collaboration with National Multisectoral Program against AIDS (PNMLS), the Jeunesse Espoire (Youth Hope) Association, the Congolese Union of People Living with HIV Organizations (UCOP+), the Congolese Associations Network Together against HIV / AIDS (RACOJ) and the National Network of Organizations of Assisi Community Support People Living with HIV groups (RNOAC_GS / PLWHA) launches the #ZWA NGA BIEN (Look at me well), a multimedia awareness campaign to fight stigma and to encourage the public to screen.

Two popular artists from the Congolese music scene, Lexxus Legal and Sista Becky, have pledged alongside young people living with HIV (PLHIV) from the Jeunesse Espoire (Youth Hope) association and MSF to fight the stigma that affects people living with HIV in DRC. " #ZWA NGA BIEN (Look at me well) is not just the title of the song written by Lexxus Legal while listening to the testimonies of PLHIV; it is a strong and clear call to fight the misinformation about HIV and the prejudices, isolation and social disregard for people living with the disease. The campaign testifies that HIV is not a death sentence because people living with HIV can lead a normal life with antiretroviral therapy (ART). Using music, #ZWA NGA BIEN is specifically aimed at young people who – without knowledge and understanding remain at high risk of contracting the HIV virus -  to encourage them to fight stigma and get tested.

"High levels of stigma around HIV mean that people refuse to get tested and know their HIV status. They refuse the idea of having HIV for fear of being shunned and isolated by their community, and they end up becoming seriously ill. It is critical to fight and stop the stigmatization of people living with HIV to allow them to continue living their lives. This is possible thanks to antiretrovirals which inhibit the virus in the body and allows people with HIV to live a normal life,” says Pamela Van Zuylen, Coordinator of MSF’s HIV project.

The song #ZWA NGA BIEN, which forms the centre of the campaign, was inspired by the testimonies of HIV activists from Jeunesse Espoire. Through the voices of Lexxus Legal and Sista Becky and some of the activists who also appear in the music video, the song appeals to viewers to look at PLHIV differently.

"The majority of Jeunesse Espoire members who are living with HIV are taking antiretroviral therapy and are in good health. To see them, there is clearly no difference between them and the HIV-negative people. Most people who stigmatize PLHIV do not even know their own HIV status! That is why we wanted to share the testimonies through this song, to gradually eliminate this stigma,” says Toussaint Ngundoli, Coordinator of the Jeunesse Espoire (Young Hope) Association.

Running from 15 November to 15 December #ZWA NGA BIEN will directly address the myths and misinformation surrounding HIV and AIDS through a range of informative shared through digital channels which allow people to ask questions and get answers about HIV discretely and anonymously – Through Facebook MSF DRC, Twitter @MSFCongo and a Whatsapp hotline 0824993712. The campaign will also broadcast in Kinshasa and Goma through traditional media (radios, TVs, print media).

The campaign will be marked by a free music concert on December 2, 2017, in Bumbu, Kinshasa, with artists Lexxus Legal, Sista Becky, musical groups Bumbu-Tabula Raza and Recoba being hosted by popular host "In all cases". Spectators will be provided with information and guidance on HIV services, and medical staff will be on hand to provide free testing and discrete counselling.

"Knowing one's HIV status allows someone who tests negative for HIV to adopt safe behaviour and for those who test positive to get early medical care. When HIV treatment is properly followed, one can live in good health and lead a normal life. That's this campaign is so important for us,” concludes Pamela Van Zuylen, MSF AIDS Project Coordinator.

MSF is an independent medical humanitarian organization committed to providing free, high quality care for people living with HIV in Goma and Kinshasa. In Kinshasa, MSF provides free medical and psychosocial care to people living with HIV and AIDS since 2002. In particular, the Kabinda Hospital Center provides outpatient services and acts as a referral treatment centre for AIDS patients requiring hospital care.  In Goma, North Kivu, MSF has supported DRC’s National Programme against HIV/AIDS to provide screening, treatment and adherence support for patients in five health centre since 2015. 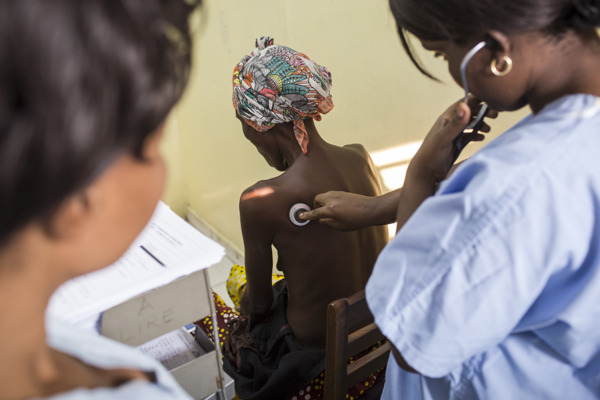