The tenth Ebola outbreak in the Democratic Republic of Congo (DRC) was declared on 1st August in the North Kivu province, on the north-eastern part of the country.

The initial alert came after a woman from Mangina was admitted to the local health centre on 19 July for a heart condition. She was discharged but died at home on 25 July with symptoms of haemorrhagic fever. Members of her family subsequently developed the same symptoms and died.

At the Ministry of Health’s request, Doctors Without Borders (MSF) is part of the task force coordinating the intervention and is focusing on caring for patients affected by the virus as well as protecting local health structures (and their workers) by helping with triage, decontamination and trainings.

As of 03 September, MSF had treated 65 patients confirmed to be suffering from Ebola and admitted a total of 124 patients for testing for the virus in Mangina. Of the patients confirmed Ebola positive in Mangina Ebola Treatment Centre, 29 had recovered and returned to their families whilst three confirmed patients and two suspect patients remained under treatment. Another isolation centre was built by MSF in Beni and handed over to the Ministry of Health, who assigned it to another NGO – it is now a treatment centre.

In total, 337 staff are currently working in MSF’s Ebola Projects in North Kivu and Ituri.

The national laboratory (INRB) confirmed on 7 August that the current outbreak is the Zaire strain on the virus, the most deadly and the same that affected West Africa in 2014-2015 as well as Equateur province, in western DRC earlier in 2018 – although the virus’ strain was different from an outbreak to another.

Four weeks after the declaration of the epidemic, the epidemiological situation in Mangina and the surrounding areas is still concerning (four health zones in North Kivu and Ituri provinces, Mandima, Mabalako, Beni and Oicha) have so far reported confirmed or probable cases of Ebola). Teams are still working on identifying all active chains of transmission. This is not simple given that some cases have occurred in highly insecure areas and cannot easily be followed up with the usual case investigation and contract tracing.

Since the beginning of the outbreak over 4,100 contacts have been identified and more than 2,300 are being followed up by the Congolese Ministry of Health. The contact tracing and follow-up is done by the MoH with a team of epidemiologists.

Whilst cases have decreased dramatically we cannot yet say that the epidemic has stabilized or is under control. New cases are still arriving at our treatment centre in Mangina but we are not seeing the number of suspect cases we would expect to see at this stage of the epidemic. We are concerned that this could be not only because of a reduction in the number of infections but because those patients experiencing symptoms are too afraid to access care or do not understand the importance of early hospitalisation and treatment. We also don’t have a clear idea about how many unreported deaths could happen at community level.

At the MOH’s request, MSF is part of the task force coordinating the intervention and is focusing on caring for patients affected by the virus as well as protecting local health structures (and their workers) by helping with triage, decontamination and trainings

[i] Probable refers to community deaths that have links to confirmed Ebola cases but which were not tested before burial. 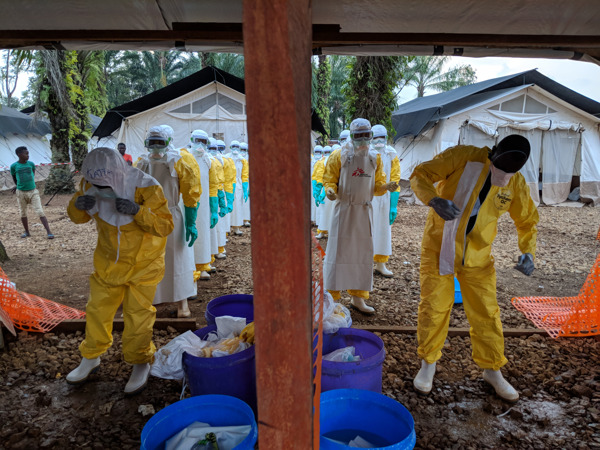