How would you describe the situation in North Kivu now?

Mweso, in eastern Democratic Republic of Congo (DRC), is really in the heart of the conflict. Five or more groups are fighting each other in the bush and the situation is completely unpredictable. Some of the groups might be fighting on the same side today, but be fighting against each other tomorrow.

MSF supports the 250 bed hospital in Mweso, which is the only health facility of its kind for 100 km around. The problem here is very much related to the conflict. People never know if they will be able to reach the hospital the next day, and the same is true for our Congolese staff.

How do people deal with the violence?

Mweso is in the mountains, so it gets really cold at night. When an armed group decides to enter a village, the villagers are forced to flee. There is a school in Mweso town where fleeing people can sleep; otherwise, they have to sleep in the fields, in the cold and the rain. It is appalling to see the poor circumstances in which these people have to live.

How are the staff handling this emergency situation?

The violence directly affects their work. There’s a health centre just 10 km from Mweso, though it takes an hour to reach it. On some nights, the nurses aren’t able to go home because there is fighting outside, so they have to sleep in the clinic.

Do you feel that the situation in DRC is a forgotten crisis?

The media doesn’t talk about what is happening in eastern DRC, even though a different emergency happens there every day. There may not be mass fighting, as in Syria, but torture and gang rape are a daily reality. My colleagues, especially my Congolese colleagues are the ones dealing with this horror on a daily basis.

Our Congolese colleagues are the real heroes of the project. They suffer the same things as our patients have suffered, and yet they are still motivated to come to work every morning. If one day they don’t turn up, it could mean that their house was robbed or someone in their family is missing.

Which other MSF projects did you visit?

I also visited Walikale, where MSF supports a hospital and a number of health centres. Last January in Walikale, we received 122 women from one village who had been raped. After two weeks, they felt secure enough to come to us for treatment. We have built a special space in Walikale where we offer family planning, treat sexual transmitted diseases and provide care for people who have been survivors of sexual violence.

Before, you could say that the high number of rapes in DRC was due to the violence, but now it is very sadly accepted as normal. Half the time, the survivors don’t realise the medical danger and psychological consequences of what has happened to them. We try to convince men and women that rape is not normal and give out information about which clinics provide the services they need.

Which are the main causes of death in DRC?

In eastern DRC, people still die from the most simple and easy to treat diseases: malaria, diarrhoea and pneumonia.

It’s hard to see people coming from far away, crossing several frontlines to reach the hospital, because all the other international organisations have left. People have to choose between letting their child die at home or risking that something may happen on the way to the hospital.

That’s why we are teaching community health workers to treat people in the villages for these three diseases, so that they don’t need to travel to health centres.

What other activities is Mweso and Walikale area?

We carry out vaccination campaigns to prevent measles, diphtheria and tetanus. In the health centres, we vaccinate about 1,000 children a month. But given the enormous size of DRC, it’s impossible to reach everyone. Every three or four years, when there are enough newborns, a new measles outbreak starts. To stop this happening, you need a health system that works, but unfortunately that just doesn’t exist in DRC.

The 30-year conflict doesn’t help: there’s a whole generation of Congolese mothers who have never known what it’s like to have stable healthcare.

What was the most memorable moment?

I experienced an emotional moment in the neonatology unit in Mweso hospital, where there are many underweight newborn babies. It’s a spotlessly clean place where the mothers create a very special atmosphere. The midwives show videos every afternoon of women from around the world with premature babies. The mothers always thought that they have these problems because they are from DRC. Seeing women from around the world in the same situation, taking care of premature babies, really encouraged them. The team effort they made was impressive, with all the mothers cheering when a baby gained 100 grams. It was amazing and encouraging to witness.

MSF has worked in North Kivu since 1981. Currently it supports the Ministry of Health in Mweso, Walikale, Masisi, Rutshuru and Bambu hospitals and surrounding health centres. MSF provides both basic and hospital-level care to people affected by recurrent violence who would otherwise have little access to medical services. In 2016, our teams provided more than 270,000 outpatient consultations in the Mweso area alone, nearly half of which were for malaria. MSF also supports five health facilities in Goma, offering screening and treatment for HIV/AIDS. 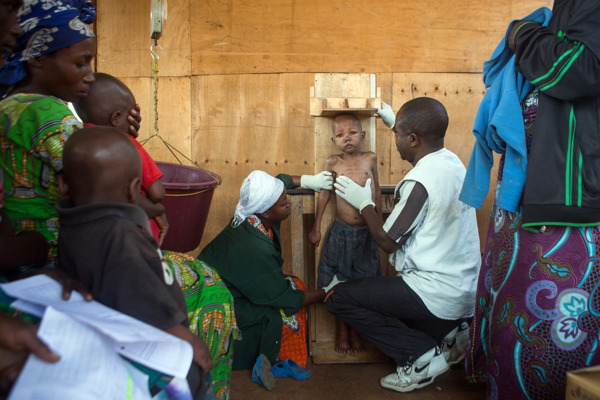