The protracted conflict in South Sudan’s Mayendit and Leer counties is having a profound effect on the local population, says international medical organisation Doctors Without Borders (MSF). Men, women and children are regularly forced to flee their homes to escape fighting, and struggle to access essentials, including food, water and healthcare. In recent weeks, MSF teams have encountered extremely high levels of malnutrition and have launched an emergency response to treat malnourished children.

“The extreme level of violence has had a severe impact on people’s ability to meet basic needs such as safe drinking water, food supplies, shelter and healthcare,” says MSF project coordinator Nicolas Peissel. “People have lost everything and struggle every day to survive.”

“This means that one-quarter of the children that we have consulted in our clinics are malnourished and almost a tenth are in a severe condition,” says Peissel. “These figures are extremely worrying.”

In response, MSF has expanded its regular mobile clinics over the past week to include treatment for malnutrition.

Due to the tense security situation in the area, it is currently impossible for MSF teams to open a hospital or even to refer patients to another health facility, as doing so would endanger both patients and medical staff. In such conditions, providing healthcare is a major challenge, even more so because people are constantly moving from one place to another in search of safety.

Nyayolah arrived at an MSF clinic with her one-year-old twins, both of whom are malnourished. “In October and November we were forced to run away from our village three times to hide in the bush,” she says. “We learned to listen for the noise of the armed men’ cars and tanks, and grabbed whatever we could before running away. The armed men shot at us and looted our homes. I ran with my twins in my arms and my four-year-old daughter ran beside me. Sometimes we saw people drop to the ground as they ran after being shot, or throw their belongings away because they could not run fast enough. We hid in the bush until night time and returned when the soldiers had gone. Every time this happened, we came home to less. Our cattle, goats and chickens gone; then our crops; and finally our houses looted and burned.”

A few weeks later, Nyayolah’s family made the decision to leave their home and seek shelter on an island in the swamplands. During the 17-hour journey, they survived on swamp water and the little food they could carry with them.

“People are on the move because they are constantly fleeing violence, searching for a safe refuge for their families or simply looking for resources,” says Peissel. “If they hear about a food distribution, for instance, they will travel in that direction. So we need to constantly adjust our medical activities to the movements of population.”

Prospects for the next few months are grim, according to Peissel, as the ongoing dry season is likely to make food even harder to get hold of. “If people cannot find a secure place to live, with decent access to safe drinking water, food, shelter and healthcare, it is very unlikely that the situation will improve for this population,” he says. 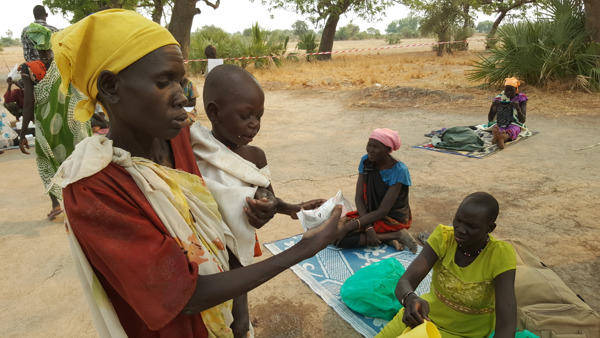