Friday, February 17, 2017 — SEATTLE/RUSTENBURG – New analysis of data detailing the extent of sexual violence in the Rustenburg area indicates that one in five HIV infections (approximately 6,765 of all female cases) and one in three cases of depression among women (5,022 cases) are attributable to rape and intimate-partner violence (IPV), while one in three women inducing abortion (1,296 cases) was pregnant as a result of sexual violence.

These startling findings, presented at annual in Seattle at the annual Conference on Retroviruses and Opportunistic Infections, follow from an in-depth 2015 survey conducted by MSF among more than 800 women living in communities along the mining belt where the health consequences of sexual violence remain largely unaddressed and demand urgent action.

Much additional suffering could have been prevented if survivors had been able to access a basic package of healthcare services, but according to MSF epidemiologist Sarah-Jane Steele, “Opportunities are missed each day to prevent HIV infection, psychological trauma, and unwanted pregnancy for victims of sexual violence in on the platinum mining belt, because there are too few health facilities with the capacity to provide essential care.”

“It is not unrealistic to expect, at a minimum, that every sub-district in the country has a health centre that can provide an essential package of care to mitigate the consequences of rape and other sexual violence,” Steele says.

Alongside increased access to services there is also a need for health promotion within communities, as half of the women MSF surveyed in 2015 did not know that HIV can be prevented after rape if PEP is received within 72 hours. The situation could be helped by a two-pronged approach of establishing more health facilities as points of entry for sexual violence care services, while raising awareness in communities about the benefits of accessing care.

A note on research methodology:

MSF’s 2015 survey of more than 800 Rustenburg women between the ages of 18-49 established that one in four have been raped in their lifetime, whereas approximately half have experienced some form of sexual or intimate partner violence. Initial findings from this survey were released in the report Untreated Violence: http://bit.ly/2aVCYKg in August 2016. Having established the prevalence of sexual violence, MSF aimed to determine the attributable burden of disease. This was achieved by using World Health Organization estimates of disease risk to determine population attributable fractions (PAFs). The PAFs were then applied to the population distribution figures for the area, as well as local disease prevalence estimates obtained through literature review.

About MSF in Rustenburg

MSF has been present in Rustenburg since July 2015, when the organization began supporting the North West Department of Health (DoH) to expand access to care for survivors of sexual violence living in the shadows of the area’s platinum mines. Services offered at primary healthcare facilities called “Kgomotso Care Centres” (KCCs) include PEP to prevent HIV and other sexually transmitted infections, and psychosocial support and counselling for survivors. Patients requiring more advanced medical, psychosocial or legal services are referred to hospitals, other government departments and/or communit 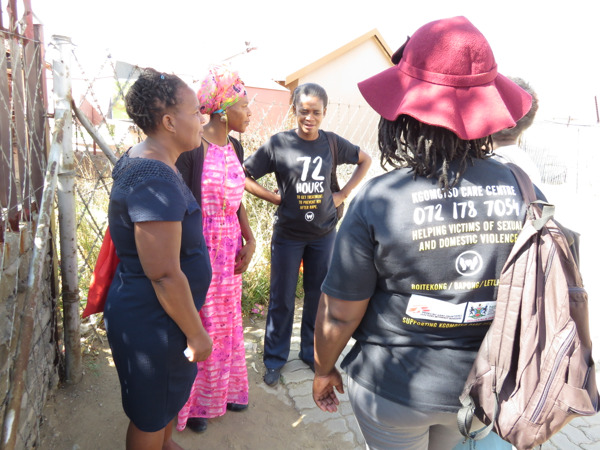