The Department of Basic Education (DBE) will today announce the finalisation of the commendable learner health policy that could open the way for critically important sexual and reproductive healthcare (SRH) services to be delivered in South African schools, the international medical humanitarian organisation Doctors Without Borders (MSF) is calling on the DBE, Provincial Departments of Education and School Governing Bodies (SGBs) to overcome the longstanding barriers of the past and move positively into the future by implementing these news guidelines, and ensure that learners can finally benefit from needed comprehensive school-based SRH services. The Integrated Policy on HIV, TB and STIs is a big step forward and reaffirms the government’s commitment to the delivery of a comprehensive care package for learners, including general health education, HIV counselling, testing, provision of contraception and PrEP as well as screening for TB and sexually transmitted illnesses (STI ) in schools. Importantly, it moves on from the 2011 Integrated School Health Policy (ISHP), which was co-developed by the DBE and the Department of Health, by clarifying that implementation is not the domain of SGBs. Until now SGBs in some Districts have blocked the full implementation of the ISHP in schools, particularly the distribution of condoms and contraceptives to learners.

Despite the many progressive elements of the policy, it still remains unclear how these vital services will be resourced and implemented. “The need for SRH services in schools is clear and urgent, but until now implementation has been held back by a combination of policy gaps and some resistance to these services on the local level. This means that much of the opportunity to protect school children from HIV has been missed,” says Dr. Amir Shroufi, MSF’s medical co-ordinator in South Africa. “There is also a strong need to educate and clear common misconceptions among parents, principals and teachers around what services will be offered in schools, and why it is in the best interests of their children that they support access to these services.”

A 2011 HIV impact population survey conducted by MSF in Uthungula District in KwaZulu-Natal found that youth under 29 years are driving the HIV epidemic, with fewer HIV positive young men and women aware of their status compared with other populations. HIV prevalence was shown climbing from 5% in 18 year olds to over 20% in 19 year olds – a clear basis for the provision of SRH services in schools.

‘Some learners are sexually active and need protection. But it’s the massive jump in HIV prevalence that occurs after learners leave school that makes these services so necessary. This tells you that we need to start moulding new behaviour in schools, particularly among males, by providing learners with sexual health education and getting them into the habit of using preventive services,’ says Musa Ndlovu, Deputy Field Coordinator in MSF’s HIV/TB project in Uthungula District.

With the Integrated Policy on HIV, TB and STIs already approved by the Cabinet of South Africa, MSF urges the DBE to revise the 2012-2016 Integrated Strategy on HIV, TB and STIs to bring it in line with the new policy and provide clear guidance on how Provincial Departments of Education can practically deliver SRH services in schools. Provincial Departments will then need to ensure that appropriately funded and resourced implementation plans are put in place, with clear responsibilities and accountability for delivery at district levels.

Successful multi-partner SRH schools programs already exist in South Africa, and the evidence and lessons from these should be shared and studied to ensure that schoolchildren receive the protection they need.  MSF currently runs two school health programs in different areas of the country, both in partnership with local authorities and health facilities. These programmes demonstrate that working in partnership with Departments of Education and health, local leaders, school principals, parents and members of SGBs, it is possible to provide comprehensive SRH services to learners.

uThungula District (specifically Eshowe and Mbongolwane): In 2016, MSF health education reached 38 schools and 17,160 learners, 43 % of  whom were tested, and are now regularly re-testing. Of the 7,412 students that were tested, 7312 were HIV negative and 93 HIV positive. 93 students were linked to care and referred for the prescription of antiretroviral treatment. The Schools program in Eshowe has been active since 2012  and initially, each visit commenced with health education in the classes, followed by HIV counselling and testing for those students who chose to test. Schools allocated three days per visit, but this proved insufficient for ongoing support and care, and gave rise to the training of Learner Support Agents to function as HIV/TB focal persons in schools.

Khayelitsha: In January 2016, a school principal informed MSF that 8 female learners were pregnant and were returning to school for the New Year. The school, a local primary health care clinic and the City of Cape Town Health Services department embarked, in partnership with MSF, on an intensive outreach programme. Using the ISHP as a guide, an integrated, youth-focussed care package was developed, including health services such as HIV/TB health education, HST and TB screening and linkage to care. Six events have been held in this school to date, covering 1200 participants, 435 of which received HCT, with eight students testing positive and being linked to antiretroviral treatment.  Over 8400 condoms were distributed. 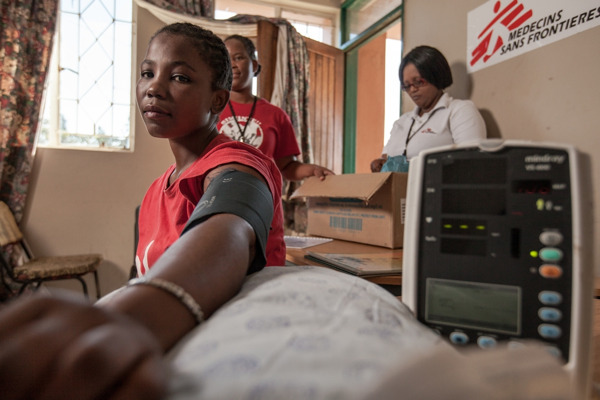