24-years ago on April 7, 1994, Doctors Without Borders (MSF) teams in Kigali witnessed the city descend into violence. These were the first days of what would go on to become known as the Rwandan genocide, during which more than a million people lost their lives, including MSF staff.

The crisis that engulfed the country also spilled across the border, forcing refugees into neighboring DRC, Uganda and Burundi. Among those who lived through the tragedy were young people who would decades later become fieldworkers for MSF.

Claudia Kanyemera, Dominique Mukunzi and Innocent Maniraruta first encountered MSF as an organization providing medical care and assistance to people fleeing the violence in Rwanda. Today, they share the experiences that inspired and motivated them to join MSF:

“I decided to join MSF long ago because I admired the mission of MSF, the neutrality, how MSF helps people who are in a critical situation, people who are victims of war. As a genocide survivor, a victim of political crisis, I know how much people need support when they are in these conditions.

At that time of the Rwandan genocide, in 1994, I was in secondary school. We lived in the south province of Rwanda when everything started, and I was forced to leave my home with my family. We were internally displaced to another part of the country. I lost some family members during that time. It was really difficult. We fled and went to a place we thought was secure, but everywhere in Rwanda, there was no place that was fully secure.

A few months after the fighting began, I found some work with a non-profit organization, helping to translate between French and Rwandese. That was where I first saw MSF – they had set up a hospital that shared the same compound with this non-profit.

Some days, I would help out with translations at the hospital when they needed me. That’s when I saw how MSF treated patients without discrimination and without any bias. They really cared for the people. That’s when I decided I would go to university and one-day also join MSF.

After the fighting stopped, and things finally returned to normal, I applied to go to university.

I dreamed of studying medicine, so I could join a humanitarian organization as a doctor. But after the genocide it was not easy to get scholarships and studying medicine was very expensive.

The scholarship I was able to get was to study finance, so I changed my mind about doing medicine. In the end, I couldn’t get my exact dream of becoming a doctor. But I built a career in finance, working as an auditor and then a finance manager at a bank, heading departments and doing a masters in economics.

But I still wanted to do more for people, so I decided to join MSF as a finance manager in the field. Today, even though I’m not a doctor, I can still help in some way, and work to achieve my dream of changing people’s realities.

“In 1994 I was 11 years old when we fled. The genocide just took place in my home country Rwanda, and we had to escape. We walked for days, all the way across the border, into the Democratic Republic of Congo (DRC), until we reached the refugee camp in Bukavu. That’s where I first met MSF – in the refugee camps, helping people.

We stayed there for over a year. Then in 1996, war started in Bukavu, and we had to leave again. Once more we walked for days, all the way to Kisangani, hundreds of kilometers away. Sometimes there were no villages along the way, so we just slept in plastic sheeting on the side of the road.

There is something which stays in my mind from that journey. I remember being on the road to Kisangani, and there was a camp along the way. One day a small plane landed close to where we were, and it was MSF. MSF came to the middle of nowhere and made a small hospital which was helping refugees on the road.

Before fleeing Rwanda, my father worked in a bank and my mother worked at Kigali hospital as a social worker. But with the violence, we had to leave (including my sister and two brothers). All in all, we spent three years on the road and in camps in the DRC. My mother got a job with MSF in the refugee camp, working in the nutrition centre. In 1997 it was finally safe enough to move home. We had to start everything over in Rwanda: home, work, and school for us kids.

After school I went to university to become a pharmacist. The experience of my mother influenced me to want to work in a similar field. Although there are other organisations doing humanitarian work, MSF inspires me. I remember the help MSF gave me when I was in need. I always keep that in mind, to remember to help what once helped me.”

“Since many years ago, I have always wanted to work with humanitarians so that I can help people who are in desperate need.

In fact, in the beginning I always wanted to work with children so that I can give back and share what I have. MSF does a great job in helping people in need. It’s something you can’t imagine until you go to the field and see how people suffer, and then you see how MSF helps those people solve their problems, especially by offering medical assistance.

I remember the genocide which took place in Rwanda in 1994.

We Rwandans saw how MSF came to assist the people who were in need, while at the same time we saw how a lot of the rest of the world didn’t come to assist or to offer help. For the most part, Rwandans had to find the solution to the crisis themselves.

I remember how I really wanted people from those countries to come and help us. But for a long time, no one came; people ignored what was happening, and Rwandans suffered.

But then I realized that MSF had come to assist in Rwanda. In fact, MSF did a great job, they did good work and saved lives. I remember thinking that other organizations and other countries should take MSF’s example to come and help immediately and not wait until problems become a big issue.

It was also a lesson to me. It made me feel that I should also work to help people who are in need, to transfer my skills in some way with the aim of assisting and protecting people.

That’s why I am committed to helping in places where MSF works. I am ready to contribute, even if it can be difficult. Because I know that nothing could be as bad as what happened during the genocide in Rwanda.” 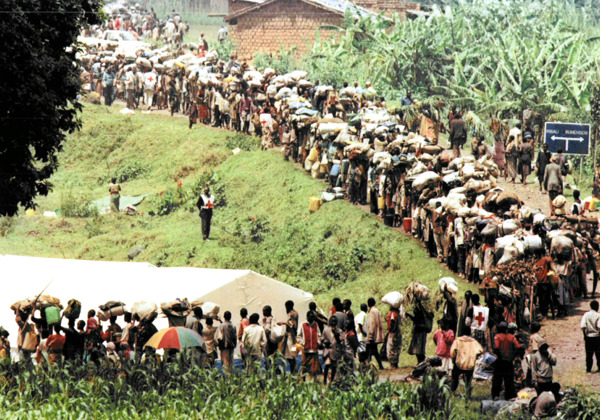