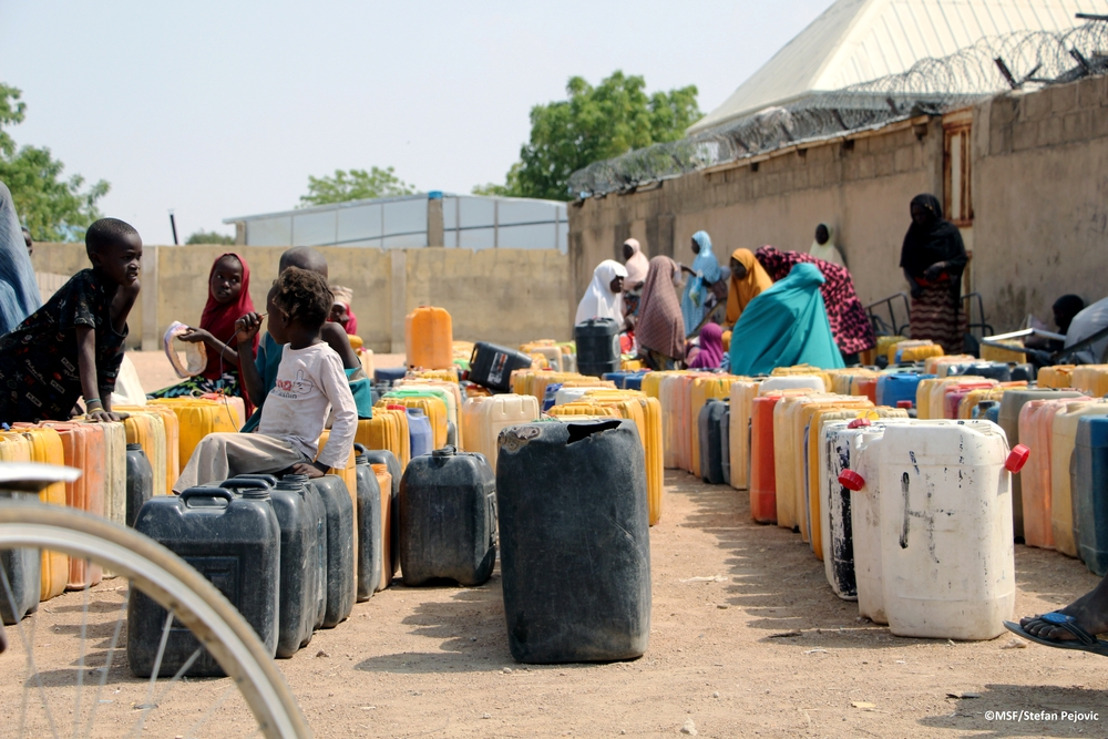 "We have to be grateful that we now have water, but we don’t usually have enough water when we enter the dry and hot season," says Adama. She was forced from her home by the violence that has spread throughout Borno state, in northeast Nigeria. Adama now lives in a camp for displaced people in Pulka, a small garrison town located 115 km southwest of Maiduguri, the state capital. Adama is only one of around 37,039 displaced people trying to survive here.

The dry, hot season in the part of western Africa known as the Sahel usually lasts from November until May. Not a single drop of rain touches the cracked earth for nearly seven months, while the Harmattan, a dry wind coming from Sahara, brings desert sand and hot air during the day and cold air at night. The temperature can go from 9 and 35 degrees Celsius in a day. This extreme climate was challenging for local farmers even before the armed conflict in Borno began. The situation now, after 10 years of violence, has worsened due to the high number of displaced people, limited farming land and clean water, and a lack of other basic resources and means to produce food.

Even if people somehow manage to produce food often they have to exchange it for water. In some places, some groups are making money by selling water, from pre-existing water points or built by humanitarian actors, to displaced people, sometimes recognize by some community leaders. Often the only water that people can get is polluted or not properly treated with chlorine, which can cause health problems, especially among children who are part of one of the most vulnerable groups. Organisations in charge of water and sanitation in the area recently built an artificial lake, or a ‘pond’ as it is called by locals. However, due to a non-functioning chlorine treatment unit and no existing connection to the pumping system, the pond has had little impact and is mostly used by people to do laundry or water their cattle.

“The problem of insufficient water is very serious,” says Fati, another displaced person who has settled in Pulka. “When we have money, we buy water from the well, but if we don’t have any, we have to fetch it from the pond and this makes our children sick.”

Water trucking was also introduced by different WASH actors as temporary solution. However, logistical issues due to frequent closures on the main road to Maiduguri mean this option is not reliable, leaving Pulka residents with no choice but to use the pond. Even when there is enough water, the bigger issue is the quality of this essential resource.

Most people do not have the arable land or water to farm or grow food in the displaced person camps because there is not enough space and also because the situation outside the camps is too dangerous. Farming land is located on the periphery of Pulka, outside the trenches and fences that make the town more resistant to attacks and intruders, but also cut off the population from the outside world. In such conditions stress, tension, even conflict, is to be expected.

"Those of us with four or five jerry cans are usually asked to wait for the pushcart owners from the community to get water before we can get water," explains Maryam, another camp resident. “There are men who are in control of the water points; they are the ones that usually tell us to wait our turn in the queue. But we don’t usually wait. We force our way to get the water whenever the person at the water point has had their fill. And this, in most cases, lead to scuffles and injuries.”

Médecins Sans Frontières/Doctors Without Borders (MSF) runs a 97-bed hospital in Pulka, which offers free-of-charge general and specialist healthcare to all residents, including displaced people. Roughly 58,000 patients were treated in the hospital’s outpatient department in 2020 with respiratory tract infections and polluted water-induced diseases being vast majority of cases. MSF also conducts regular health education in the displaced person camps about the importance of clean water, especially when water is a scarce and very valuable resource.

Mohammed, another patient in the hospital, called on water and sanitation providers to take serious measures to improve the current conditions. "We get our water from the pond. But the water has lots of dirt in it; it’s not treated and that is why we constantly have abdominal problems and related illnesses. Our major problem here in Pulka is the problem of water, as it gives us abdominal pain. For about two weeks now, I’ve not been feeling well. From one illness to another; today, it could be abdominal pain, tomorrow it’ll be catarrh. We are appealing to those in charge to fix our boreholes, as some of them are not functioning."

"There is a clear lack of coordination and communication among different water and sanitation organisations here, which impacts the situation,” says Siham Hajaj, Head of Mission in Nigeria. “People of Pulka need immediate action of humanitarian actors, which need to improve both the access to and the quality of the drinking water. Unless WASH actors in Pulka act right now, we will witness even more suffering by population there."

MSF has been working in Nigeria since 1996 and in Borno since 2014. In Borno state, our medical teams provide emergency treatment, surgery, malnutrition treatment, maternal and antenatal services, vaccinations, mental health care, and prevention and treatment for malaria and other diseases.