Monday, June 18, 2018 — Following the press release we shared with you yesterday regarding the disembarkation in 629 rescued people from the rescue vessel Aquarius in Valencia, Spain, we would like to share with you a selection of powerful high res photos of the rescued people’s journey and their testimonies.

The rescued recount stories of despair and their harsh journey from as far as Sierra Leone and South Sudan, their brutal stay in Libya and the final push to reach Italy in unseaworthy rubber dinghies.

These people have been at the centre of tense stand-off in the central Mediterranean Sea after Italy and Malta refused the Aquarius (jointly operated by SOS MEDITERRANNEE and Doctors Without Borders [MSF]) authorisation to disembark them in the nearest safe port. Because of this the exhausted, injured and shocked people had to endure four more days on rough seas to finally reach Spain where they were received yesterday.

“I've been in Libya since 2016. Living there is from hell to hell. I've been from prison, to prison to prison. I have not yet cried my tears of joy. I went from Sierra Leone to Agadez to Sabha, it took me two weeks in the desert. That desert is not an easy journey. To pass through that place you see people asking you to drink your urine, as there's no water. It's all they have. I saw people begging and dying in-front of me, everyday along the desert. You really must have strength to survive, if you don't have strength, you die.  I saw many men fall down, we don't wait for them, we keep walking,” says Moses, one of those rescued.

Like Moses, most of the rescued people have heart-rending stories to tell and coming to Spain is a huge relief for many who look forward to starting a new life.

Ahead of the European Council meeting this week, MSF calls on European governments to put human lives first – not politicking. European states must facilitate swift disembarkation in the closest safe ports in Europe where rescued people can receive adequate care, and ensure those in need of international protection are able to apply for asylum or other forms of protection. They must not obstruct independent non-governmental search and rescue initiatives and must set up a proactive, dedicated search and rescue mechanism in the Central Mediterranean.

“European governments must appreciate the importance of search and rescue. More than 500 people have drowned in 2018 while attempting the perilous journey on unseaworthy dinghies across the Central Mediterranean. According to news reports, 12 people died this week in one incident in which a US naval ship rescued 40 survivors after their dinghy capsized,” says Karline Kleijer, MSF Head of Emergencies.

“As the doctor on board the Aquarius I consider it a privilege to care for these 630 cold, hungry, and tired people. I take my responsibility seriously and will speak to their humanity in the face of cynical and hypocritical governments,” says Dr David Beversluis, MSF medical doctor onboard the Aquarius.

“I have seen the suffering of these people as they boarded our ship. I have heard the horrific stories of their journeys. The young Nigerians I talked with earlier this week, and every other person attempting the dangerous Mediterranean crossing, whether on the Aquarius or not, wish desperately to trade the nightmares they’ve been living for grander dreams. It is time that Europe finally takes responsibility for protecting them, and reached out from the horizon with welcoming arms,” adds Beversluis. 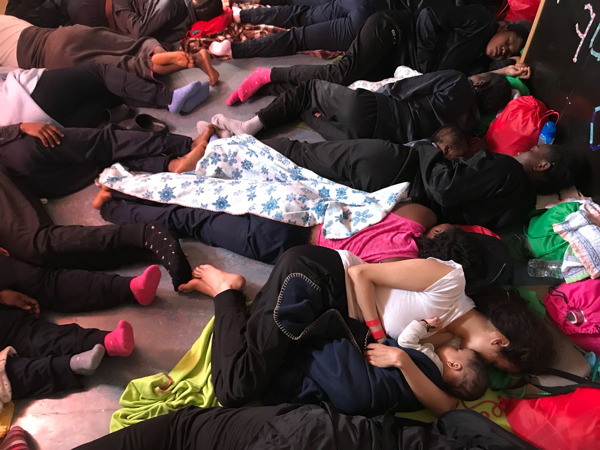