International Humanitarian organisation, Doctors Without Borders (MSF) heads to the Indian Patent Office in New Delhi for a hearing in which we are opposing pharmaceutical corporation Pfizer’s patent application for the pneumonia vaccine (PCV) that protects against 13 types of pneumococcal bacteria.

This move is meant to allow many other manufacturers entry into the market – and is key in reducing the price of the pneumonia vaccine which by comparison currently costs 70 times more than the available measles vaccine in the poorest countries.

“To make sure children everywhere can be protected from deadly pneumonia, other companies need to be allowed to enter the market so they can supply this vaccine for much lower price than what Pfizer charges,” explains Dr Greg Elder, medical coordinator for MSF’s Access Campaign.

Consider the fact that pneumonia is the leading cause of childhood death, killing almost one million children annually and yet only Pfizer and GlaxoSmithKline (GSK) are the two pharmaceutical corporations producing the vaccine.

The hearing is a follow up to the first patent application opposition ever filed by MSF in March this year.

MSF calls for affordable pneumonia vaccines ahead of Pfizer’s patent hearing in India.

New Delhi/ Johannesburg, July 29, 2016 – Today Doctors Without Borders (MSF) is defending the rights of millions of children around the world to be protected against pneumonia at a hearing at India’s Patent Office. In March the organisation filed a ‘patent opposition’ to prevent US pharmaceutical company Pfizer from getting a patent on the pneumococcal conjugate vaccine (PCV13), so more affordable versions can become available to developing countries and humanitarian organisations.

Pneumonia is the leading cause of childhood death, killing almost one million children each year. Currently, pharmaceutical companies Pfizer and GlaxoSmithKline (GSK) are the only two manufacturers of the vaccine, which could prevent a large number of these deaths. Broad use of the vaccine could also reduce antibiotic use in children by 47% each year in an analysis conducted in 75 countries, helping to stem the global rise of antibiotic resistance.

Pfizer has priced the pneumonia vaccine, which it markets as Prevenar 13 out of reach of many developing countries and humanitarian organisations. At the lowest global price, it is now 68 times more expensive to fully vaccinate a child than in 2001, according to a 2015 MSF report, The Right Shot: Bringing down Barriers to Affordable and Adapted Vaccines, with the pneumonia vaccine accounting for almost half of the price of vaccinating a child in the poorest countries.

“The pneumonia vaccine is the world’s best-selling vaccine, and last year alone, Pfizer brought in more than US$6 billion dollars in sales just for this product—meanwhile many developing countries, where millions of children risk getting pneumonia, simply can’t afford it,” said Dr Greg Elder, Medical Coordinator for MSF’s Access Campaign. “To make sure children everywhere can be protected from deadly pneumonia, other companies need to be allowed to enter the market so they can supply this vaccine for a much lower price than what Pfizer charges.”

One vaccine producer in India has already announced that it could supply the pneumonia vaccine for $6 dollars per child (for all three doses) to public health programmes and humanitarian organisations like MSF. This is almost half the current lowest global price of $10 dollars per child, which is only available to a limited number of developing countries via donor funding through Gavi, the Vaccine Alliance.

MSF’s challenge to Pfizer’s patent—a ‘pre-grant opposition,’ which is a form of citizen review at the patent examination stage—shows that Pfizer’s patent application lacks technical merit. Simply adding 6 serotypes to a widely-used carrier protein (CRM197), in order to conjugate 13 serotypes of streptococcus pneumonia into a single carrier represents a step that is considered ‘obvious’ to skilled vaccine developers. Additionally, Pfizer’s response to the patent office does not provide sufficient evidence to support its claims.

“The pneumonia vaccine clearly does not merit patenting under India’s Patents Act and would only result in artificially prolonging Pfizer’s market monopoly, which keeps millions of children at risk of contracting this deadly killer,” said Leena Menghaney, Head of MSF’s Access Campaign in South Asia. “India must rebuff demands from pharmaceutical companies, and tackle low-quality patent applications which only add trivial technical changes and often deprive millions of people from accessing more affordable treatment and vaccines. Pfizer’s unmerited patent application on the pneumonia vaccine should be rejected, opening the door to more affordable versions of the vaccines being produced.”

An equivalent patent to the one opposed in India was already revoked by the European Patent Office (EPO)* and is currently being challenged in South Korea. *The equivalent European number EP1868645 was revoked in December 2014; the case is currently under appeal process.

Each year, MSF teams vaccinate millions of people, both as outbreak response to diseases such as measles, meningitis, yellow fever and cholera, as well as routine immunization activities in projects where it provides health care to mothers and children. In 2014 alone, MSF delivered more than 3.9 million doses of vaccines and immunological products. MSF has purchased the pneumonia vaccine in the past for use in its emergency operations.

MSF is scaling up its use of the pneumonia and other vaccines with a particular focus on improving its work in routine immunization, as well as extending the package of vaccines used in humanitarian emergencies. 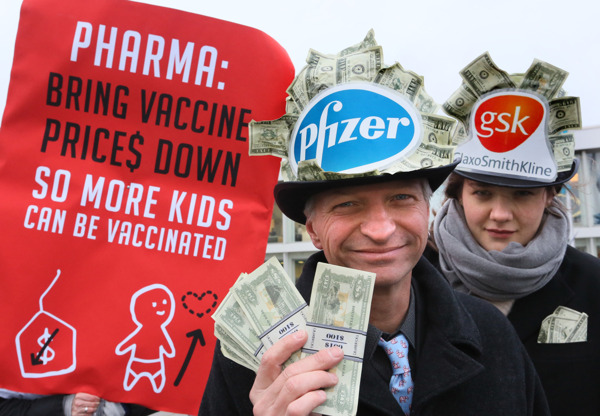