Tuesday, October 2, 2018 — Paediatric teams from the international humanitarian medical organization Médecins Sans Frontières/Doctors Without Borders (MSF) have reported alarming levels of mortality rates among children aged under five in Magaria, south Niger. MSF, in collaboration with Niger’s Ministry of Health (MoH), has been treating 730 children currently admitted to hospital. Of these, 208 are critically ill and crowded into the paediatric intensive care unit. The majority of these patients are suffering from complications of severe malaria or malnutrition, and an average of 10 children have died every day for the past month.

“We have never seen anything like this before and we fear it’s just the tip of the iceberg,” said Dr. Dorian Job, MSF’s Niger program manager based in Geneva. “Each year, at about this time, we expect a peak in malaria infections, as well as an incidence of malnutrition above emergency thresholds. But we haven’t seen patients overwhelming the hospital in such numbers before.”

Given the number of deaths recorded in mortality surveys conducted during the malaria and malnutrition peaks in previous years, MSF medics believe they are only seeing one sixth of the children who are in need of care. Many of those diagnosed with malaria or malnutrition are also suffering from other diseases. Common problems include severe malaria and severe malnutrition.

“While our hospital is already terribly overwhelmed, it’s likely that hundreds of children are seriously ill in the community and not getting the care they need. The children we are seeing are arriving at the hospital extremely late. Sadly, many already have complications so serious that they cannot recover,” said Job.

including the distribution of malaria prophylaxis to families with children aged between three months and five years – mortality rates remain alarmingly high. MSF has also sent 243 experienced medical staff from across Niger and around the world to ensure patients receive the best possible care inside the hospital and out in the community, where a team is running mobile clinics to care for children closer to home.

“The hospital in Magaria is the only health facility available in a region for 700,000 to one million people, around 20 percent of whom are under five years old. So while the malaria season is worse this year, it’s not surprising that we are overwhelmed. The health system in the area is chronically underfunded, lacking means, organization, training and support. This prevents people from accessing care and in turn claims lives. We could double our capacity and still not meet the needs of the children aged under five in the community.”

Note to editors: MSF has been working with Niger’s Ministry of Health in the Zinder region of the country since 2005. Teams work to improve care for paediatric patients and prevent, detect and treat childhood diseases.

In the busy city of Magaria, MSF runs a 435-bed paediatric unit where 11,100 children were admitted from 1 January to 31 August this year. More than 3,300 children aged under five were admitted to the unit in August alone.

MSF also supports 11 health centres, 14 health posts and six stabilization rooms for under-fives in the Magaria area. From 1 January to 31 August, the MSF team carried out 93,530 outpatient consultations (31,390 of which were in August) and admitted 13,284 children (3,629 in August) to the ambulatory nutrition program.

The paediatric unit currently employs 594 staff including 485 doctors and nurses. 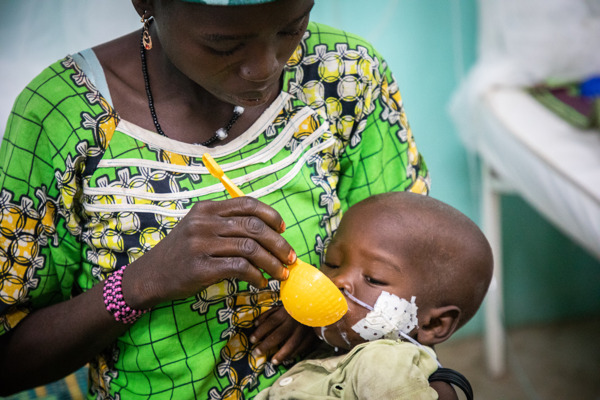