How do you explain malnutrition?

Malnutrition is an imbalance between the body’s nutrient requirement versus its intake. There are two main categories of malnutrition generally observed in children; Marasmus and Kwashiorkor. Marasmus is a form of severe malnutrition characterized by energy deficiency due to inadequate caloric intake, while kwashiorkor is protein deficiency despite adequate energy intake. In marasmus the child is wasted and thins out while in Kwashiorkor the body swells due to a lack of protein in the body. In Pakistan, most of children suffer from marasmus. Malnutrition makes children prone to diseases.

What is situation of malnutrition in Pakistan, and especially in DMJ?

Malnutrition is one of the major child health issues in Pakistan. According to Pakistan Demographic and Health Survey 2012-13, around 45% of children show evidence of chronic malnutrition or stunting and 11% are acutely malnourished requiring urgent treatment. In the districts of Naseerabad and Jaffarabad, of  around 19,138 children screened on our three locations, 2,259 were severely malnourished. That’s equal to over 11 per cent. This ratio is alarming, and the concern is that the number is increasing every day.

Why is there such high malnutrition?

It is important to note that there is no food insecurity in this area. Food is easily accessible, although affordability is a concern. The issue is a combination of socio-economic and cultural reasons. Low income, lack of access to health facilities, unhygienic practices, poor health seeking behaviour and unsafe water are some main causes of malnutrition in the area. This is compounded by a poor uptake in breastfeeding.

How important is breastfeeding?

Very important. Medically exclusive breastfeeding is recommended for newborns for the first six months. Breast milk is a safe and balanced diet, with zero contaminants. It’s the right temperature and has anti-bodies which help the child’s body fight against infection. The process of breastfeeding also enhances bonding between the mother and child. If a child is not breastfed, their immunity against disease is compromised. Things like black tea, herbs, honey, goat or formula milk can never compensate breast milk.

Why there is no culture of proper breastfeeding?

Even if mothers breastfeed their children, it is not properly done or done enough. There is a lack of awareness on the importance of breast milk. Due to large families, children often don’t get enough care. We also observe a widespread misconception that colostrum – the first pale yellow milk of mother – is not good for the child. There are also practices of giving black tea, herbs, and powdered milk to newborn babies.

In 2008, MSF began working in the eastern districts of Jaffarabad and Naseerabad, supporting primarily nutrition programmes for children under five–years-old in the District Headquarter Hospital in Dera Murad Jamali with a network of mobile clinics and outreach sites. MSF teams support the inpatient therapeutic feeding for complicated malnourished children, general paediatric ward and neonates, as well as ambulatory therapeutic feeding programme, which provides essential medical care to more than 10,000 children annually. MSF’s objective is to improve access to the provision of quality nutrition support to severely malnourished children and lactating mothers.

What is MSF planning to do in future on malnutrition?

It has been observed that many children become malnourished again after treatment. It is because their families continue poor health practices. We want to break this vicious circle. Hence we are also strengthening the preventive component of the project through health promotion activities. These raise awareness about best health practices at a community level, so that the issue is addressed at the root. 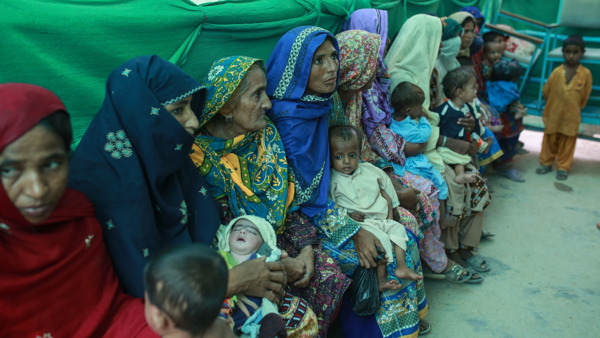