“As a young girl, I loved nursing. I loved to see them in their white uniforms. That was the first thing that attracted me. They were very organised, beautiful and smart old ladies. So, as a young girl, I wanted to be a nurse so having become a nurse now I have fulfilled part of my dream.

I started working for MSF in 2003. I joined and was trained by MSF to administer and prescribe Antiretroviral drugs (ARVs). At the time of my training however, ARV rollout was still being blocked by the government. I worked with MSF in fighting this injustice and even worked in the government healthcare to provide some treatment to patients. Today, I am also involved in the pre-exposure prophylaxis (PrEP) study. PrEP is an HIV prevention strategy where HIV negative people take medication daily to prevent them from becoming positive if they are exposed to the virus. I also anchor the ‘moms and tots programme’ linked to Khayelithsa’s Town 2 clinic. This initiative is an MSF prevention of mother to child HIV transmission intervention which also provides more general integrated care for mothers and their babies in partnership with mothers2mothers South Africa and the City of Cape Town health department.

Nursing is a noble career where we care for other people. I see nursing as a real calling where you know that on a daily basis, you are making a difference by touching the lives of other people. To me, when you are a nurse, you become fulfilled waking up in the morning, going to your workstation and making a difference in someone’s life. When I started working with HIV patients, when people were hopeless, I knew that when they saw me, there could be a ray of hope that I brought. When I started I was a junior nurse but I knew that I wanted to reach the highest pinnacle of nursing. There are many rewards and opportunities that come with nursing. In 2009, I received the Cecilia Makiwane Recognition Award for the best nurse in the Western Cape. It was humbling because you realise that as you are working, there are people that are watching you and your progress.

Nursing is about caring and you have to be willing to take a journey with your patients. It is about humility and how you protect the dignity of the people you are caring for. If you analyse the nursing profession, you realise that you need to love your patients. I am still grateful to be contributing to the profession.”

“My mother used to tell me that, from the age of three, when others were not feeling well I would show so much concern. I was a good support system for my siblings.  I was very hospitable from a young age. It was inspiring to understand and know how the human body works and to be a helping hand. Then as I grew up, I could see the need for nursing intervention in my hometown. We would receive a lot of individuals from child-headed families. My experience with patients who were going through issues of incest pushed me to take the forensic route where I have the opportunity to make a difference and help people with the medical attention which they would not get at a conventional hospital.

I completed my studies in forensic nursing at the University of the Free State in 2010. Before that, in 2006, I worked in the emergency department in a hospital in Limpopo. That is where I realised that there was a lack of attention to survivors of sexual violence. I, therefore, assisted with setting aside a room that was dedicated to them. I like the emergency department because it kept me going and kept me open minded. You know you should be ready all the time.

Then in 2016, I joined Doctors Without Borders. I now work mainly on the preventative side of nursing, initiating health talks and carrying out community-based activities.  I have represented the voice for a project in multiple national publications, speaking out about the issues of sexual violence in the country as well as the problem of a shortage of forensic nurses in South Africa. The preventive side of nursing allows you to be independent, to initiate actions in communities before a person even reaches a hospital or clinic. You’re not limited to being in the facility all the time. You can measure your strengths and weaknesses, and sharpen your mind.

When it comes to forensic nursing there is a lot of uniqueness. The mere fact that you are able to be there for somebody in need in their hour of need is vital. The forensic nursing environment is very sensitive but it aligns with my personality. I listen more and give out more as I want to have a positive impact on people who are going through traumatic situations, risking sexually transmitted diseases and HIV. It is a very special service. If you come and you are in a situation facing intimate partner violence and you are experiencing intensely difficult emotions, we can work together and look at how to improve a patient’s life.

Nursing offers so many windows of opportunity. Once you get into the profession you discover more. You can work with patients in clinics and hospitals. You can also work in education as a lecturer in the discipline or in a management capacity being responsible for running nursing activities. Some of my colleagues are now running practices and medical centres, so there are no limits to this career.”

“I completed a four-year degree in nursing science followed by short courses in termination of pregnancy, TB and HIV management and nurse-initiated management of anti-retroviral therapy (NIMART). These courses have allowed me to gather the right tools administer life-saving treatments to HIV positive patients. Before that, I have enjoyed some time doing some creative work with I picked up in high school. After my matric year, I took a gap year doing a course where I travelled a lot and developed a love for people. When my time to go to college arrived, I applied for geology at first but later settled on nursing instead.

The nursing career has its challenges but it is amazing. We have carried out training with the department of health, district gynaecologist and obstetrician. Our team has seen growing numbers of patients coming to us in their time of need: from receiving just five patients in the beginning to now attending to 24-second trimester termination of pregnancy cases. We advocate for patients in the Madibeng area and you can literally see the positive changes.

We are also involved in the training of three more hospitals to carry out this procedure. I realized that there was the need for nurses skilled in offering safe termination of pregnancy. I decided to go through the training so that I could help with reducing the harm and complications that come with procedures that are badly executed and unsafe.

Nursing is a calling you answer to when you know that you really love to work with people. I remember my mother telling me that I needed to have the heart for nursing. Working as a nurse is so much easier and rewarding when you put your patients first. For me, it was the right choice to work in this environment where you’re able to provide services to those in need.”

“I graduated from the Kwa-Zulu Natal Nursing College in 2010 with a Diploma in Nursing and Midwifery. I also received a diploma in clinical Nursing Science from the University of Kwa-Zulu Natal in 2013. I have since received training as a trainer of trainers, as well as in treating Advanced HIV and nurse-initiated management of anti-retroviral therapy.

I didn’t initially plan to become a nurse. When my time to go to college arrived, I received a government scholarship to study nursing and a few years down the line, here I am as a professional helping people most in need of healthcare. I joined MSF in 2013 and I am currently working as a supervisor for a team of four clinical nurses handling the high transmission areas, such as farms, rural areas and industrial sites where there is a high need for medical intervention.

When I started I was focused on the prevention of mother-to-child transmission of HIV but eventually, that project was handed over to the department of health. Now I work on healthcare projects for men. I know that most men don’t like to go to the clinic, so this programme is especially focused on linking them to care. As a man, I get to reach out and help fellow men with their health issues linked to TB and HIV testing and treatment. I am excited to see that improvements with access to healthcare for men and people in more remote areas.” 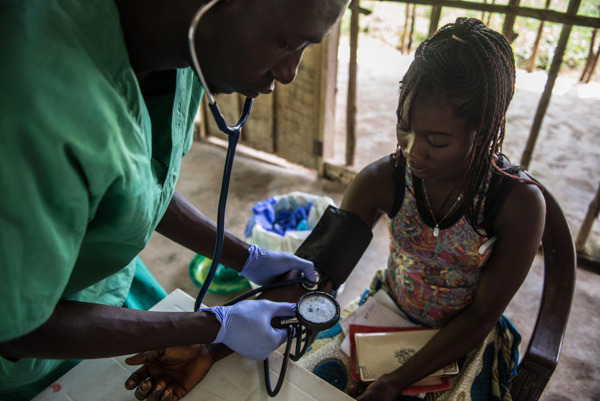