Since August 25, MSF has treated more than 30,000 patients in the Cox’s Bazar area, effectively five times the number of people who sought treatment at MSF facilities during the same period last year. The main problem among these patients is respiratory tract infections and diarrheal diseases, which are directly related to the poor hygiene conditions in the informal settlements.

As a result of the massive increase in demand for our medical services, MSF has hired an additional 800 staff, bringing the total number of staff on the ground in Cox’s Bazar from around 200 people to 1,000. In July, MSF was treating approximately 200 patients a day, now MSF is treating over 2000 patients every day spread out over all clinics.

MSF has rapidly expanded its inpatient capacity at its Kutupalong medical facility from 50 to 70 beds, with new wards and isolation capacity for infectious diseases. The inpatient health facility, which provides basic primary and secondary healthcare services and is MSF’s largest health facility in Cox’s Bazar, has been running since 2009.  A second in-patient facility is under construction in Balukhali and is expected to open in mid-October with a focus on mother and child health. Two more in-patient facilities are also planned to open in the region to meet the increased demand for secondary healthcare.

But with a population of more than 521,000 refugees on top of the existing 200,000 who arrived previously, there is still a need to substantially increase the inpatient capacity. The challenge is to find the available space to setup Internally Displaced People (IDPs) as the area is severely congested.

Due to the huge pressure on our outpatient services with an approximately 2,500 Out Patient Department (OPD) consultations and 1,000 Emergency Room (ER) consultations per week at the Kutupalong clinic, demonstrating quadruple the demand since the influx, we are also setting up health posts (Balukhali, Mainnerghona) and additional mobile clinics to meet the needs of the new arrivals.

Outside of the medical response, improving water and sanitation is a major part of our attempts to prevent the spread of disease. MSF has built 200 latrines, 25 boreholes and a gravity water supply system while trucking an average of 100m3 water daily to the settlements from the MSF inpatient health facility borehole. Latrine and water point construction is planned in the worst affected areas, in coordination with the DPHE and other actors.

Between now and the end of December we aim to install an additional 100 deep tube wells, 300 shallow tube wells and 1000 latrines in the Balukhali and Kutupalong Makeshift Settlements. Given the size of the population (Kutapalong/Balukhali), we need to have 8,000 latrines built—that is a ratio of one latrine to 50 people for the emergency phase. The longer we delay that, the greater the risk of an outbreak of a waterborne disease. In the other locations, MSF is also assessing how to improve water and sanitation.

A health post was set up on October 1 and is now expanded into an outpatient clinic. We have a system of ambulances to be able to refer patients needing urgent inpatient care to hospital. ​
Burma Para Makeshift settlement

A Surveillance Network and an OPD is being setup. The construction started on October 12 and we plan to start activities on October 1

Land has been found to build a hospital. The plan is to build a temporary structure with a 30 or 50 bed capacity pending the construction of a sustainable IPD.

A health post has been running since late September with plans to expand to an OPD with additional services including a delivery room and examination beds and to set two mobile clinics in the periphery.

A new mobile clinic at the Hakimpara Settlement started running on October 8 with plans to setup one OPD in the entry of the camp and put in place two mobile clinics in total in the surrounding area.

An OPD with plans to expand to additional services with delivery room and examination beds and a mobile clinic in the periphery of the Settlement.

A mobile clinic started activities on 8 October with nutritional screening and basic primary health care & monitoring at the border point.

A mobile clinic started in later September and has been since upgraded to a health post. The clinic sees 160 patients per day on average.

A recently constructed 30 – 50 bed inpatient department (IPD) will be opened in the coming weeks. We have constructed an OPD during the influx in October 2016 and has seen triple the number of consultations since the 25 August influx. MSF has also opened one new Health Post in the part of the Settlement where new arrivals have settled. Two more health posts are planned in the coming weeks.

This medical facility maintains 70 beds and is currently the largest MSF health facility in Cox’s Bazar –running since 2009. Our services include outpatient consultations; a 24-hour emergency room; inpatient department with 4 wards for neonatal care, children and adults; basic laboratory services; sexual and reproductive healthcare services; and a Mental Health Department. The facility collaborates with local health authorities (who are able to use the MSF laboratory for testing for cholera) and local NGOs (providing care for TB patients). Since August 25, one new health post nearby has been opened and two more are planned in the coming weeks while the OPD will be moved further down the road to enable further expansion.

MSF plans to open additional mobile clinics and Health Posts to serve the people living in Hakimpara Makeshift Settlement. MSF is also supporting the Ministry of Health in its Cholera Vaccination Campaign with technical advice and community mobilization and logistical support. MSF is positioning emergency preparedness stocks and isolation sites (CTUs) in all operational areas in case of an outbreak or other critical health event affecting the population. 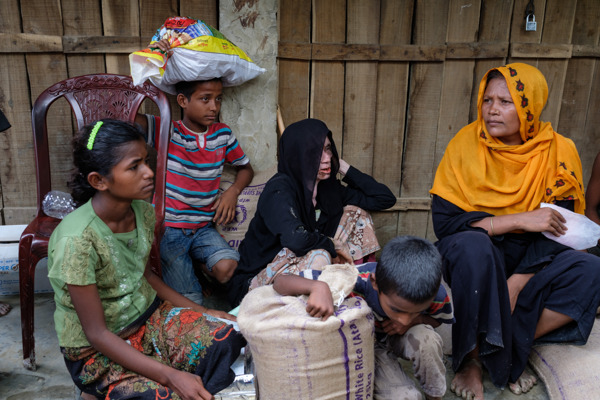