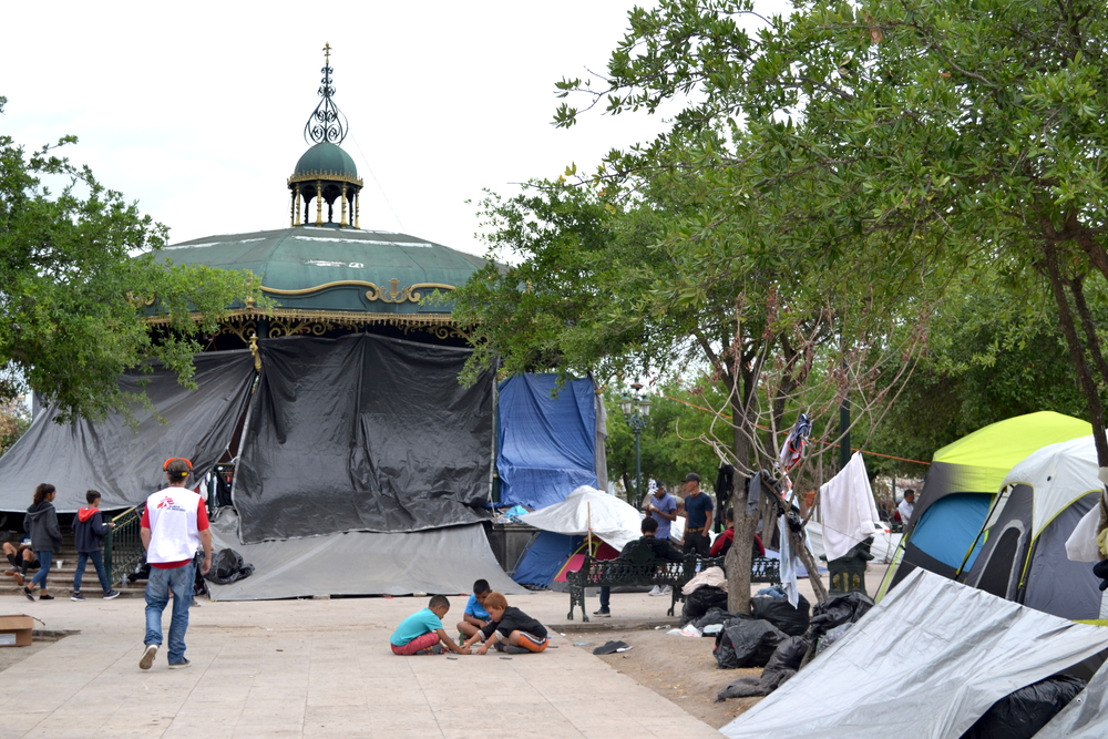 As one of the few organisations providing care, MSF says assistance from local authorities and other organisations is urgently needed

The situation for migrants in Mexico's northern border cities is sharply deteriorating as expulsions under Title 42 continue and hundreds of people arrive from the south each day seeking safety in the US. The response from local authorities in cities such as Nuevo Laredo, Piedras Negras, Ciudad Acuña, Reynosa and Matamoros are inadequate, leaving thousands of people without access to basic services or safe shelter. As one of the few organisations providing medical and mental health care in these cities, Doctors Without Borders (MSF) teams are overwhelmed by the growing needs of migrants.

In Piedras Negras and Ciudad Acuña, migrant shelters and reception centers are closed, and people do not have access to basic shelter, such as tents.

In Nuevo Laredo, an MSF mobile team has been providing humanitarian assistance to migrants from Haiti and Central America, as well as to internally displaced people fleeing violence in different parts of Mexico. More than 2,000 people remain in shelters and makeshift camps living in unsanitary and unsafe conditions. ​

"Most are families with small children sleeping on the floor, exposed to the rain and high temperatures,” said Pavel Goytia, head of MSF's medical team in Nuevo Laredo. “The 10 shelters in the city are at maximum capacity and hundreds of people continue to arrive. Many of the shelters are makeshift spaces that lack basic services, mattresses, food, drinking water, protection from the elements, toilets, showers, and proper waste management."

"I have been here for a week in Nuevo Laredo,” said Esaia Jorince, 27, who fled Haiti three years ago after his family was murdered. “The situation here is very bad, I don't have money to buy anything to eat or nowhere to sleep. It has been raining. In the shelter where we are staying there is a lot of water, I am sleeping on the floor—that is complicated for me and for my illnesses. I start crying because I have pains and I feel very bad, sometimes I want to die." Jorince lived in Brazil for several years but had to leave due to lack of employment. He hoping to get asylum in the US.

A similar situation is unfolding in Reynosa. The last remaining inhabitants of the Plaza de la Republica were evicted at the beginning of May. "The number of migrants in the city has increased in recent weeks and there is a severe lack of housing, food, and health services to assist them,” said Anayeli Flores, MSF's humanitarian affairs officer in Reynosa. “There is no space in the shelters and many people are living on the streets enduring very high temperatures.”

MSF’s medical teams have treated many migrants for symptoms related to poor living conditions such as respiratory conditions, gastrointestinal diseases, and skin, kidney, and gynecological infections. MSF’S mental health teams also care for people who are experiencing symptoms related to post-traumatic stress disorder, anxiety, grief or loss, and depression resulting from their experiences in their countries and along the migration route.

People are also exposed to high levels of violence in border cities. “I have been in this shelter in Reynosa for 22 days with my wife, daughter, and father,” said José who fled Honduras in October 2021. “We are sleeping on the floor. The other night we heard gunshots very close to the shelter. We are fleeing from bullets in my country, we didn't think it would be like that here too, and it was very scary.”

“When I [crossed] to the US, I was alone because we could only pay for my crossing,” said Yenth, who fled Honduras and entered Mexico in January 2021.  “On the other side they stopped me. I was never seen by a doctor; they did not give me any information. The next day [the US authorities] sent me to Reynosa. They didn't care that I was pregnant. [In Reynosa] I was raped.”

MSF calls on authorities at all levels and other international humanitarian assistance organisations present in the region to increase their efforts to ensure dignified conditions for both the migrant and displaced populations along the northern border. There is an urgent need to expand humanitarian activities to prevent the deterioration of health and alleviate the suffering of the people who are in a very vulnerable state.