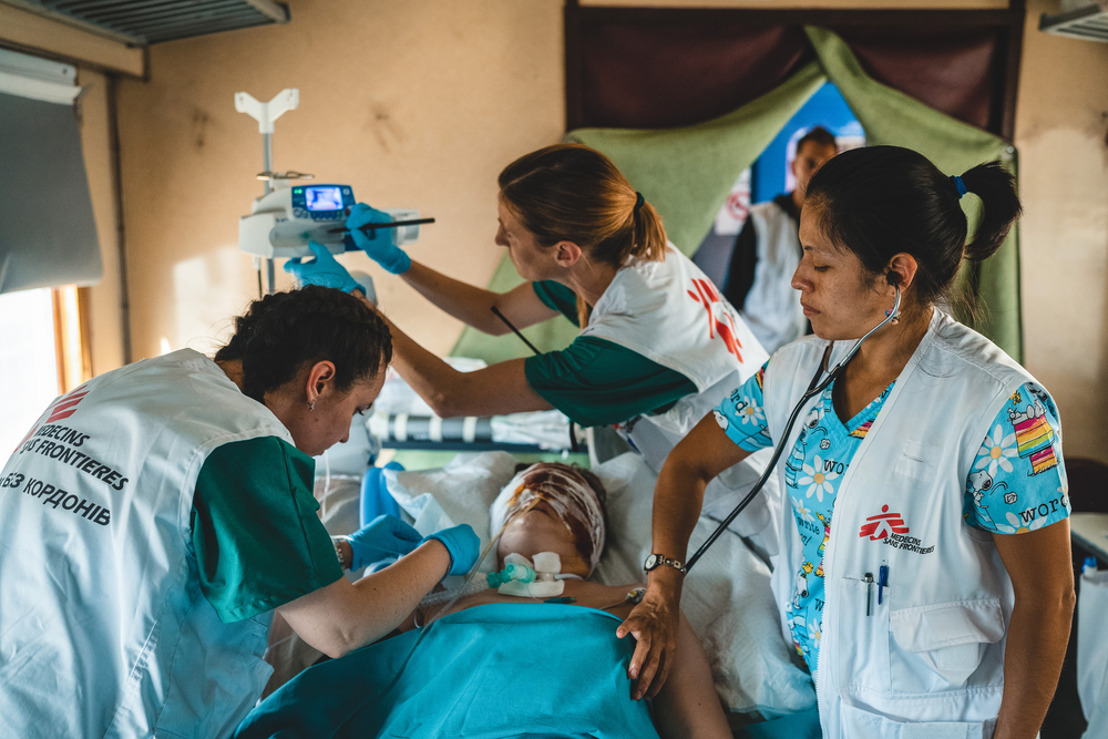 Medical data and accounts from patients evacuated on the Doctors Without Borders (MSF) medical referral train show that the war in Ukraine is being conducted with an outrageous lack of care to distinguish and protect civilians. Over 40 percent of the war-wounded on the train have been elderly people and children with blast wounds, traumatic amputations, shrapnel and gunshot wounds. This points to a lack of respect for civilian protection which is a serious violation of international humanitarian law, said the medical humanitarian organisation. ​ ​

Between 31 March and 6 June, MSF medically evacuated 653 patients by train from war-affected areas in the east to hospitals in safer parts of the country. On the 20- to 30-hour journey, nurses and doctors monitored patients and provided care to keep them stable. Many people shared their harrowing experiences with the MSF staff.

“Our patients’ wounds and the stories they tell show unquestionably the shocking level of suffering the indiscriminate violence of this war is inflicting on civilians,” said Christopher Stokes, MSF emergency coordinator. “Many patients on the MSF train were wounded by military strikes that hit civilian residential areas. Although we cannot specifically point to an intention to target civilians, the decision to use heavy weaponry en masse on densely populated areas means that civilians are inescapably, and are therefore knowingly, being killed and wounded.”

From the accounts of patients, several consistent and harrowing themes emerged:

People referred on the train are mostly either long-term hospitalised patients or recent war-wounded who need post-operative care following traumatic injuries. Of more than 600 patients transported and cared for on MSF’s medical train over two months, 355 were injured as a direct result of the war. The overwhelming majority of these patients suffered blast injuries. And 11 percent of war-related trauma patients were younger than 18, and 30 percent older than 60. ​

“I was on my way to the toilet when an explosion happened. I lost consciousness and fell. Once I came around, my face was covered in dry blood. I had an open arm fracture and must have also broken my nose when I fell. I was alone and in pain screaming for help but with no one heard me. Later, a volunteer found me and spent two days trying to call an ambulance that would get me into a hospital,” a 92-year-old woman from Lyman, Donetsk region, recounted.

Blast injuries caused 73 percent of the war-related trauma cases, with 20 percent caused by shrapnel or gunshots and the rest by other violent incidents. More than 10 percent of war-trauma patients had lost one or more limbs, the youngest just six years old.

MSF patients and their caretakers on the train tell unimaginable stories of children, men and women trapped in conflict, bombed in shelters, attacked during evacuations and seriously injured in explosions, by bombs, by gunshots, or by mines and shrapnel. Some patients report being injured in their homes. Others came under heavy weapons fire as they tried to travel to safer areas. Most patients we talked to when designating who is responsible for their injuries pointed at Russian and Russian-backed military forces.

“As in all conflicts, MSF calls on all armed groups to respect international humanitarian law (IHL) and abide by their obligations to protect civilians and civilian infrastructure, allow people to flee to safety, and allow for the safe and timely evacuation of the sick and wounded. In addition, we call for humanitarian access to be able to provide assistance to people no matter where they are. In Ukraine we see, at a minimum, indiscriminate attacks on civilians so our call is particularly urgent,” said Dr Bertrand Draguez, MSF president.

MSF first worked in Ukraine in 1999. Since 24 February 2022, we have significantly scaled up and reoriented our activities to respond to the needs created by the war in Ukraine. This includes a medical referral train that receives patients from hospitals near to the frontlines in the east that are receiving or preparing to receive influxes of newly wounded patients, and transfers them to hospitals in the west of the country, where they can continue their treatment. The medical train is run in collaboration with Ukraine's Ministry of Health and National Railways. Between 31 March and 6 June MSF transported and cared for 653 patients on the train. In the east and south, MSF also runs an ambulance referral system. While MSF provides medical assistance in the regions affected by heavy fighting in the east and south of Ukraine and on the referral train, we do not have direct access to the places most of our patients come from and where fighting is most brutal. ​ MSF is also providing medical and humanitarian assistance to people displaced into other areas of Ukraine, including providing mental healthcare, treating survivors of sexual violence, running mobile clinics and donating medical and other supplies to hospitals. Surgical teams are also assisting in hospitals in the east and south, where MSF also provides ambulance referral between hospitals. Our teams also provide humanitarian assistance to people from Ukraine in neighbouring Belarus, Poland, Russia and Slovakia.