Four people died in the most recent Ebola outbreak that occurred in a remote, forested area of the Democratic Republic of Congo (DRC). This small outbreak (five laboratory-confirmed and three probable cases) was quickly curtailed. The international humanitarian organisation Doctors Without Borders (MSF) shares lessons learned from this first occurrence of the deadly virus since the end of the large-scale Ebola outbreak that devastated West Africa in 2014-2015.

The scale of this outbreak was minimised, thanks in no small part to a nurse named Dieumerci. With a name that literally translates to 'Thank God' in French, Dieumerci works at a Ministry of Health centre in northeast DRC, where the first Ebola cases started emerging.

He detected the risk of Ebola in a seriously ill man at the hospital, and rang the alarm. This man turned out to be the second confirmed case during the recent outbreak. Unlike in West Africa prior to the last major outbreak, Ebola is known in the DRC: the Ebola River, where the virus was first discovered, runs 100 kilometres away from where Dieumerci works.

That doesn’t mean that it is common disease in the area, but still, Dieumerci recognised the symptoms. His quick actions should not be taken for granted. Healthcare workers play a crucial role not only for patients, but also for general epidemiological surveillance. However, in many developing countries human resources within the health sector remain starkly inadequate.

On that fateful day where the Ebola patient came to the health centre, Dieumerci could have easily been on a sick leave, or visiting family somewhere else in the country. One cannot rely on a single individual to play the crucial role of on-the-ground surveillance.

What is needed are proper surveillance systems in resource-poor countries, which were clearly lacking in West Africa at the time of the epidemic. So all in all: thank you Dieumerci. We should all hope that during the next outbreak – be it Ebola or any other infectious disease – there will be another Dieumerci to ring the alarm bell for everyone’s sake.

The word “Ebola” doesn’t ring the same after 2014-2015's devastating epidemic. At least 11,300 people were killed, and over 28,000 were infected. As a result, Dieumerci’s alarm bell sent shock waves across the world. Congolese authorities immediately activated their outbreak response team and had strong support from WHO and other organisations.

Henry Gray, MSF’s project coordinator during this recent outbreak, has worked on seven hemorrhagic fever interventions in DRC, Uganda and West Africa, to name a few. “The pressure we felt was very different from previous comparable outbreaks: it was clearly at the top of the agenda," he says. "When it comes to Ebola, we have all learned that it’s better to be safe than sorry in order not to repeat the disaster of 2014-2015.

"However, it is sad to still see that other outbreaks in countries do not trigger the same mobilisation, even in regards to the main killer diseases like cholera or measles.

"Once the Ebola outbreak was over, we were able to re-assign some of the MSF staff towards a serious cholera outbreak on the other side of the country. Our teams went on to treat 1,100 cholera patients. "Considering the dire health needs in many parts of the country, additional support is always welcome”.

3. Old tricks are timeless – back to basics

The promise of new drugs or vaccines should not overshadow the necessity of putting in place the basic pillars of outbreak control.

It all starts with good surveillance, followed by the five pillars of outbreak control:

In West Africa, the havoc wrecked by Ebola on the entire health system created more indirect than direct victims of the virus: children became prone to infectious diseases because they weren't vaccinated; Childbirth complications led to the deaths of mothers and/or children because there were no healthcare workers to care for them; untreated cases of malaria became fatal…

International health actors need to do more to support local health facilities that often have much smaller means and equipment: training staff, ensuring there is basic protection equipment available, and that their pharmacies are stocked with first aid supplies and basic medicines. Our experience in DRC has shown that training frontline workers, even when done ad-hoc, can bring sustained effects to improve their performance in surveillance.

Like the majority of haemorrhagic fever outbreaks prior to West Africa, the recent one occurred in a very remote, forested area.

Here, the virus was already known to exist within an animal reservoir (assumed to be fruit bats) that is occasionally transmitted to apes, monkeys or men. Some people are very mobile in the region, but can only go as far and as fast as their available transportation; which is pretty much nothing beyond walking and the occasional motorbike.

Dieumerci’s village is 45 kilometers from Likati, the closest town. It is home to 18,000 people, with a majestic cathedral and large, but under equipped, hospital serving as remnants of a time when a railroad was still linking plantations across the country. Today that railroad has been eaten by the encroaching jungle. By contrast, in Guéckédou, Guinea - where the West Africa outbreak started - people can jump on a motorbike and be in the heart of the capital Conakry and its 2.5 million people within two days.

These contrasting examples show how isolation from major cities can keep the spread of deadly disease under control.

5. Medical innovations are not the magic bullet

At the time of the latest outbreak, MSF was willing to use Ebola treatments which were still in development. However this window closed as the outbreak stopped before the process to allow the use of the experimental treatments was complete. However, this event acted as a 'booster' - speeding up the process of preparing medical protocols so that new drugs (still in the experimental phase) can be used in ways that are as safe and ethical as possible.

The rVsV-ZEBOV vaccine (the most advanced investigational vaccine candidate for an Ebola outbreak today) is in development, and needs to be implemented through a study protocol. This, and a vaccine strategy - including informed consent under good clinical practice - were mandatory requirements needed from us to access them.

Soon enough, a study protocol was developed and approved by the MSF Ethics Review Board a few months ago. It was ready for implementation should an outbreak occur. Additionally, a dedicated MSF research team was ready to be deployed. Unfortunately, our negotiations at the DRC Ministry of Health level only took place when the outbreak had already been declared.

It took some time for us to explain what we were planning to do, and how this would differ from a vaccination campaign. But, we managed to obtain authorisation from all the regulatory bodies to start activities in case of a future outbreak.

It is likely that the next outbreak (and trust us, there will be a next outbreak) will happen in a similar setting. We can continue to learn how to best tackle it, and ensure that the West Africa Ebola outbreak remains an isolated tragedy.

Since 1990 MSF has responded to over a dozen outbreaks in sub-Saharan Africa. During the devastating Ebola outbreak that struck mainly Liberia, Guinea, and Sierra Leone in 2014-2015, MSF launched one of the largest emergency operations in its 44-year history. MSF admitted 10,310 patients to its Ebola management centers of which 5,201 were confirmed Ebola cases, representing one-third of all WHO-confirmed cases. During the first five months of the epidemic, MSF handled more than 85 percent of all hospitalized cases in the affected countries. At the peak of the epidemic, MSF employed nearly 4,300 staff—most of whom were from the affected countries—who ran Ebola management centers, conducted surveillance, contact tracing, and health promotion, and provided psychological support. 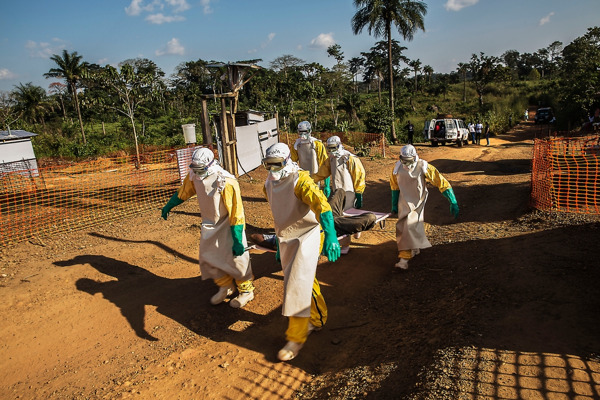