The town of Bangassou could be a poster child of the wrongly optimistic discourse around “stabilisation” and “normalisation” of the Central African Republic  (CAR) that followed the last elections in the country. And this month as donors gather in Brussels to plan the next steps to support CAR.

The few colonial buildings in town are still pockmarked by bullet holes, a remnant from the 2013 takeover by the Séléka rebellion that drove people to flee. But after close to two years of quasi total absence, State authorities have come back: a prosecutor was reinstated last December, then a judge, 30 constables, social services, a labour inspector. But this return does not mean that everything is back on track, and Bangassou town is just a pocket of relative peace in a highly unstable region.

Last June, the head of a clearly identified Doctors Without Borders (MSF) convoy bringing in supply from Bangui was killed in an ambush on the road by armed men who make a living through criminal activity on the road. East of Bangassou, roaming bands mimicking the modus operandi of the Lord resistance Army (LRA) terrorize villages, pillaging crops and abducting people – because of the insecurity, MSF had to cancel a planned vaccination for children in this area despite the high needs.

Nonetheless, since the general election early this year the Central African Republic was touted as being on the road to recovery. In the past few weeks, spikes of violence across the country have dampened the enthusiasm; but still, the so-called “normalisation” led to a steady decrease in humanitarian budgets at country level.

As of today, only 28% of the necessary humanitarian aid budget for next year has been pledged, even though the needs remain huge: 850,000 people are internally displaced or have found refuge in a nearby country; 2.3 million, or half the country’s population, rely on humanitarian assistance for survival. Things are not back to normal in CAR. “What does “normal” mean for a country that has been on a protracted crisis for decades? The most acute phase of the crisis may be over, but the problems are far from solved”, says Emmanuel Lampaert, MSF’s country representative in CAR.

The Monday morning market in Mbalazime, a village 12 kilometres from Bangassou, draws crowds into MSF-supported health centre located just next door. At the entrance, a sign proclaims “CARE IS FREE” and that makes a huge difference: a consultation in a nearby health post usually cost up to 3,000 CFA (6 Euro or R90). For the same price, you can buy a full plastic basin of rice, enough staple food to sustain a family for an entire month!

The local health centres and health posts, understocked and understaffed, struggle to offer proper service to the population, and the consequences of the lack of healthcare can be seen in the 118 beds MSF-supported regional hospital of Bangassou. On his third day on the job in the hospital, Dr Osmar Sosa Del Toro performed twelve surgeries. All of them urgent; most life-saving: for example, a woman who had her intestines perforated during a botched caesarean section a month earlier; or a six-month old baby with a severely infected abscess on his left leg. “He received an injection in a health centre one week ago. It was done poorly and became badly infected, which can lead to septic shock in such a young child”, says Del Toro. Leafing through the admission log in the paediatric ward, we can see that such infections are common.

Across the yard, in the malnutrition room of the paediatric ward, Dr Ilaria Moneta does her rounds. Malnutrition, often as a result of repeated illnesses, is a chronic issue. “It’s strange, because for the most part there is food in the homes of our patients. But it’s very difficult for parents to motivate a sick child to eat and to know how to properly feed a child. It’s a slippery slope: they’re sick, so they don’t eat, so they get weaker and fall ill again”, sigh the paediatrician.

A recent report ranks CAR, along with Chad and Zambia, as the country most affected by malnutrition; but over the first half of 2016, barely 25% of the children suffering of malnutrition were receiving proper care, according to OCHA.

So far, the signs are not encouraging for the people of CAR: due to diminishing budgets some international NGOs have started to reduce their activities, even though, in Bangassou like everywhere else in the country, the needs remain enormous.

“If CAR was one of our patients, we could say that it’s out of the emergency room indeed, but still in need of intensive care. Discharging it now would have tragic consequences,” says Emmanuel Lampaert.

Notes on Bangassou project: MSF started activities in early 2014 in Bangassou, starting activities by supporting the regional university hospital of Bangassou. It is progressively increasing its reach through work with the community and in prevention activities.

Regional hospital: MSF supports the 118-beds reference hospital where all health centres refer the most severe cases for health district of Mbomou (206.000 inhabitants). It is a full hospital with paediatric, maternity, neonatology, internal medicine, surgery, and transport system to bring cases referred from six health centres in the district. MSF is currently building extra buildings to increase the hospital’s capacity.

Health centres: MSF supports the health centres of Yongofongo, Mbalazine and Niakari (total population of 32.000), offering free primary care for all and training for the staff.

Vaccination: in 2015, vaccination coverage was below 50%. Because of the recent peak of violence the regular vaccination programme ground to a halt for a couple of year, when almost no young child was vaccinated within the routine programme after birth, leaving children vulnerable to easily preventable diseases. So MSF launched a catch-up vaccination campaign to protect 22.000 kids in the district against nine potentially deadly diseases: Hepatitis B, diphtheria, tetanus, whooping cough, polio, haemophilic influenza, measles, pneumonia, yellow fever. 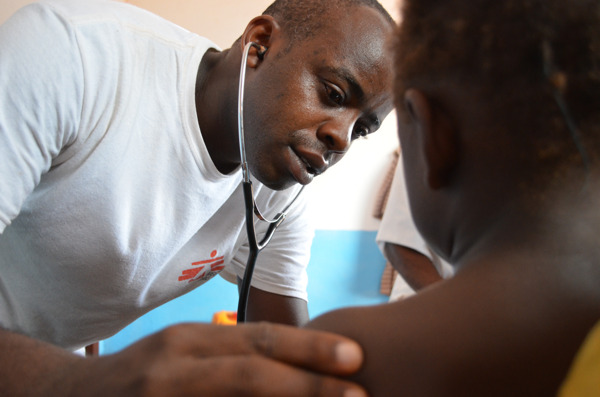