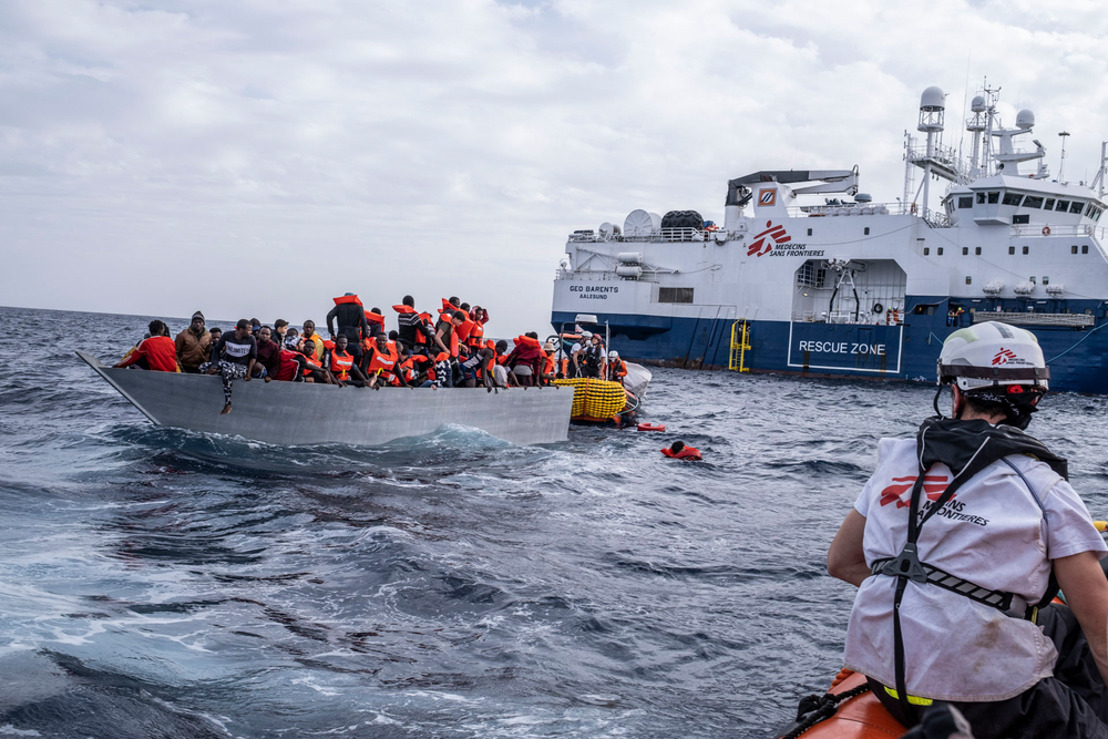 On 16 November, during a difficult search and rescue operation less than 30 nautical miles from the Libyan shores in the Central Mediterranean Sea, the Doctors Without Borders (MSF) team on board search and rescue vessel Geo Barents found 10 people dead in the lower deck of a severely overcrowded wooden boat. Alerted by Alarm Phone[i]  and Seabird[ii] to the boat in distress that was taking on water, the Geo Barents reached the boat too late to prevent this tragedy.

During a challenging afternoon rescue, after long hours of multiple rescue operations at sea, survivors from the wooden boat informed the MSF team that there were more people crammed on the lower deck, who were unresponsive when spoken to. After 99 people were brought safely on board the Geo Barents, the rescue team found the bodies of 10 people. Survivors told our team that these people had spent more than 13 hours on the cramped lower deck of the boat, with a high level of intoxicating fuel smell; the people are believed to have died from suffocation.

“After rescuing all 99 people, we've seen the 10 bodies on the bottom,” says Fulvia Conte, MSF Deputy Search and Rescue team leader on board the Geo Barents. “It took us almost two hours to retrieve them and to bring them on board, so they can have a dignified burial once arrived onshore.”

“It was horrific and infuriating at the same time,” says Conte. “This is another tragedy at sea that could have been avoided.”

Abdoulaye[iii] was one of the last survivors to leave the wooden boat. He barely had the time to understand what happened to his fellow travellers before the MSF rescuers took his arm and helped him into the rescue lifeboat.

“Let me see their bodies. These are my brothers, we come from the same place, we went through Libya together,” asked Abdoulaye as soon as he arrived on the Geo Barents. “I need to tell their families they are dead. Please let me see them.” His voice was trembling, his body shaking, and his eyes were still focused on the horizon.

In less than 24 hours, on 15 and 16 November, the MSF team performed three rescues in the Maltese and Libyan search and rescue zones, in international waters, bringing 186 people safely on board the Geo Barents. Among the survivors, there are 152 males and 34 females, among whom 61 are minors. There are several women with small children, the youngest being only 10 months old. The people on board come from a range of countries including Guinea, Nigeria, Ivory Coast, Somalia and Syria. Many of them have had harsh experiences in Libya, from where their small wooden boat left.

Although the rescued people cry out of relief and joy when they arrived on board the Geo Barents, they show signs of acute stress and trauma. Most people are terrified after the perilous ordeal. Among the survivors, some had to identify the dead body of a younger brother or of a friend who perished in front their eyes a few hours earlier.

“On a day like this, when we have to bring 10 dead bodies on board, we are once more witnessing Europe’s unwillingness to provide the much needed dedicated and proactive search and rescue capacity in the Central Mediterranean,” says Caroline Willemen, MSF Project Coordinator on the Geo Barents. “People endure horrific human rights abuses in Libya and often their only escape is to flee and take an incredibly dangerous journey across the Central Mediterranean.”

“It has become the deadliest migration route and it is shameful,” says Willemen. “With 186 survivors on board, including relatives of some of the deceased people, and people who travelled for hours on the lower deck of the boat amongst dead bodies, the Geo Barents will urgently be looking for a Place of Safety to disembark this group of extremely stressed and likely traumatised people.”

Since launching search and rescue activities in 2015, MSF has sent medical teams on board eight rescue ships[iv], at times operating the vessels in partnership with other organisations. Overall, MSF search and rescue teams have assisted more than 82,000 people. The Geo Barents is the current MSF chartered search and rescue vessel and started operations in May 2021. The vessel is currently out at sea for its fifth mission. An estimated 1,225 people have died or went missing while attempting the dangerous journey across the central Mediterranean so far this year. Today we add 10 more people to this horribly high number. Some 22,825 people have gone missing or dead on this same route since 2014.

[i] Alarm number to support people in danger at sea

[iii] the name was changed for protection purposes