Wednesday, February 14, 2018 — The failure of South Africa’s National Department of Basic Education (DBE) to provide implementation guidance on the National Policy on HIV, STIs and TB (2017) is severely limiting learners’ access to HIV testing, condoms, and other essential sexual and reproductive health (SRH) services in high schools, especially in local contexts of resistance to or conservative interpretation of the policy. The international medical humanitarian organization Doctors Without Borders (MSF) is calling for intensified collaboration by the DBE and Department of Health (DOH) to offer annual HIV counselling and testing (HCT), TB and STI screening, and year-round access to stocked condom dispensers in all high schools*.

It has been over eight months since the DBE policy committed to providing learners with comprehensive sexuality education and direct health service provision at schools, to address the country’s HIV, TB and STI burden and reduce teen pregnancy rates. With nearly 2,000 girls and young women becoming infected with HIV in South Africa each week[i] , MSF is concerned by the slow translation of the new policy into action, and lack of clarity on how HCT services and provision of condoms will be resourced and implemented.

“Our hope is that the policy guidance - when it finally comes - will be progressive, while also taking into account the views of learners and the knowledge of organizations that currently deliver health services in schools,” says Ntombi Gcwensa, MSF Patient and Community Support Manager in King Cetshwayo District, KwaZulu-Natal. “While not all learners agree on issues like the provision of condoms in schools, it is important that those who want SRH services can access them easily.”

Since 2012, MSF in partnership with the District DBE has provided health education and tested an average of 4,500 learners each year in over 30 King Cetshwayo high schools, increasing HIV testing coverage in the District. 158 learners testing positive in 2016 and 2017 have been referred to nearby clinics to start treatment, and had the choice to be linked to life orientation educators or learner support agents for in-school support. After initial resistance to the idea of in-school HCT, parents were finally won over “by repeated engagement at community events, says Gwensa. “We stressed the importance of testing early, before you are sick, as well as getting learners to test young so that it becomes habit. We showed that it was possible to ensure learners were tested in private, with confidentiality assured in our mobile testing van. ”

To further reduce stigma around HIV, STIs, unplanned early pregnancy and other challenges to the health and wellbeing of learners, MSF facilitated school discussions on sexual and reproductive health matters in STI and Condoms week.

“I feel like it is so much easier to have access to HIV testing in our school premises rather than go to town and see people we know that might judge us for going into clinics or those testing tents,” said Yenziwe Shembe, a Grade 11 learner at Eshowe High.

MSF has found that offering annual HCT campaigns on school grounds during school hours—as opposed to outside premises—led to more learners participating, and allowed for more orderly and confidential testing. A recent local DBE decision to prevent testing on school grounds is regrettable.

“In the absence of guidance from the National DBE, local government officials have chosen a conservative route on HCT for learners, insisting that testing only happen off premises and outside school hours. It’s an example of how a lack of meaningful action from the DBE could see the promising National Policy becoming another missed opportunity to protect school children from HIV,” says Gcwensa. “Services should be provided in ways that are convenient and comfortable; otherwise it is my experience the learners don’t engage.”

*Learners should also have ongoing opportunities to be referred to other sexual and reproductive health services, such as male medical circumcision, and family planning options.

MSF currently runs two school health programs in different areas of the country, both in partnership with local authorities and health facilities. These programmes demonstrate that working in partnership with Departments of Education and health, local leaders, school principals, parents and members of School Governing Bodies, it is possible to provide comprehensive SRH services to learners. 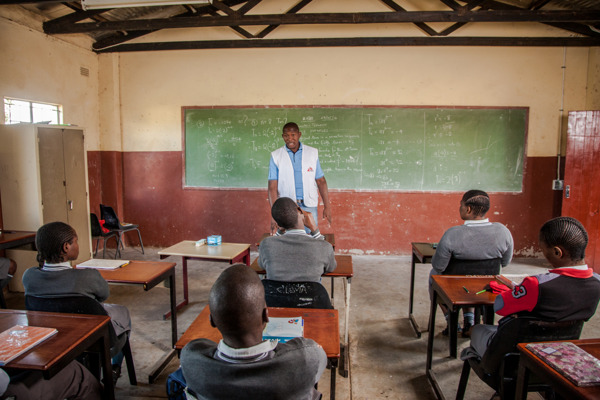