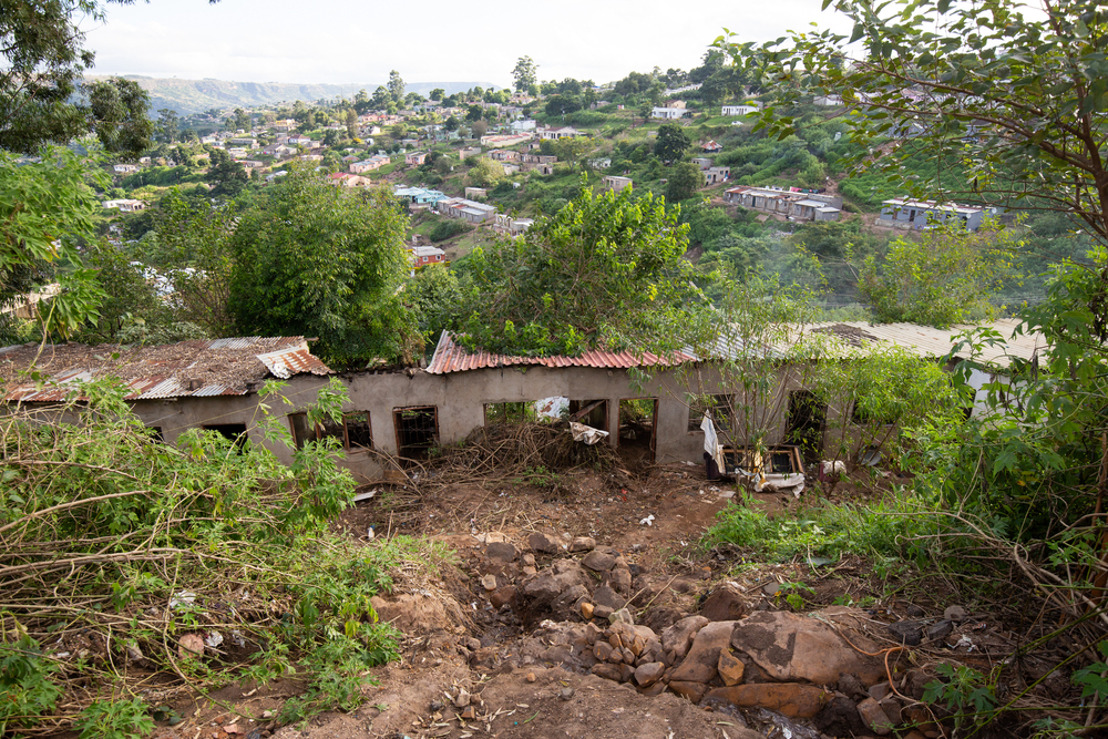 A month has passed since flash floods hit KwaZulu-Natal leaving nearly 450 people dead and displacing thousands within eThekwini Municipality after their houses were destroyed or damaged. In this time, a Doctors Without Borders (MSF) team has been on the ground assisting the most vulnerable communities. Here are a few things we have learned.

The sun has been out most days in the month since the floods, but due to the extraordinary infrastructural devastation, hundreds of thousands are still without drinking and domestic water. Tongaat to the north of Durban, a peri-urban community of over 50 000, will be without water for up to half a year, and perhaps more worrying is the fact that densely populated settlements like KwaDabeka and Ntuzuma to the west of Durban, where hundreds lost their homes and are sheltering in halls, tents, or with friends and family, remain dry.

“We have seen water return to the taps of some areas where many are homeless, such as Dassenhoek and KwaNgedezi, only for it to disappear again. Clearly it will be a long time before consistent flow can be achieved,” says Danish Malik, MSF’s water and sanitation coordinator in Durban.

To assist, MSF has installed 40 water storage tanks at priority shelters and clinics, which are mostly filled by an increasingly efficient municipality water tanking system, or by our own two water tankers. However, water tanking is extremely expensive, and more sustainable medium- and longer-term solutions are also needed. MSF is currently in talks with the city about the placement of a surface water treatment plant in Tongaat, and the drilling of boreholes in the communities of Mfume and Mbulula to the south of Durban.

An unmanaged portable toilet is worse than no toilet at all

The floods caused serious damage to wastewater infrastructure, including sewer trunk mains and several wastewater treatment works. In places like Kwangedezi, Tongaat and Umhlatuzana, we see the environment is catching vast volumes of untreated sewage, raising the risk of outbreaks of waterborne diseases in these places. More needs to be done to empower communities in such hotspots to protect themselves from disease, and to this end MSF health promoters are currently training more than 200 members of the Department of Health’s ward-based primary health care outreach teams in water safety, hygiene and disease prevention.

In the overcrowded shelters in which so many of those who lost their homes to the floods are staying, sanitation is a major challenge. These sites had no toilets at the outset, and while most have now received donations of portable toilets from a variety of entities, these are mostly not under management, and the toilets very soon become blocked and extremely hazardous. MSF has distributed 60 toilets that are under management, and we have been calling on the municipality to take on the desludging of the hundreds of donated toilets as a matter of urgency. This needs to happen in conjunction with health promotion on hygiene and water safety. ​

MSF doctors and nurses have been visiting more than 30 shelters as part of mobile teams run by the provincial and city departments of health. To begin with, the priority was ensuring that people living with HIV, TB, hypertension and diabetes who lost their chronic medication in the floods were given new medication. It wasn’t long before most shelter residents with chronic conditions were back on treatment, and cold and flu symptoms were the major reason that shelter residents came forward for care, raising concerns about possible outbreaks of COVID-19 in the generally overcrowded shelters, especially since only 25 percent of those MSF nurses consulted with said they had been vaccinated.

The most consistently requested service is counselling, however, and it is also the healthcare service that is most stretched in eThekwini Municipality in the aftermath of the floods. The demand also seems to be rising as the immediate needs for food, water, shelter and security are increasingly met by local authorities and aid groups. On May 10th, for example, 26 people staying in a shelter in Inanda requested counselling, far too many for a single registered counsellor on duty that day to see.

“A lot of people are still in a state of disbelief, failing to adjust to this new reality of having nothing while needing to live in these shelters,” says ​ ​ ​ Nokuthula Shandu, a registered counsellor working for MSF. She adds that as counselling sessions progress, it is clear that the trauma and loss of the flash floods is compounded by past traumas, by experiences of the violent unrest in 2021, by unemployment spurred by COVID-19 lockdowns and sharply increasing cost of living driven by recent escalating fuel prices.

Clinics are generally not capacitated to provide psychosocial care, and in an attempt to improve access to mental health care, MSF mental health specialists have been conducting mental health awareness trainings with the Department of Health’s ward-based primary health care outreach teams.

“In the longer term we are working with partner organizations to establish community support groups in the worst affected areas, so that those struggling with their mental health will have ongoing access to some form of support, because the fact of the matter is that for most South Africans, psychosocial support just isn’t accessible,” says Dr Manivasan Thandrayen, MSF medical team leader in Durban.

eThekwini Flooding b-roll: Water supply to clinics
A month has passed since flash floods hit KwaZulu-Natal leaving nearly 450 people dead and displacing thousands within eThekwini Municipality after their houses were destroyed or damaged. During this time, a Doctors Without Borders (MSF) team has been on the ground assisting the most vulnerable communities. Here are issues you need to be aware of; Find out more:https://msfsa.me/3NdeuIK