Tuesday, April 4, 2017 — A group of Doctors Without Borders (MSF) fundraisers will visit Knysna from 4 April to 8 April as part of its three month-long tour to raise funds and awareness about MSF’s emergency medical humanitarian work around the world in the four cities that lie in the garden route.

The tour which started on 14 March has already seen the team visiting Port Elizabeth, Mossel Bay and now Knysna. The fundraising team will be at Knysna Mall from Tuesday, 4 April until Saturday, 8 April 2017, after which they will go back to Mossel Bay before proceeding to George in the coming weeks.

“We have visited the garden route before, and we always look forward to this tour because residents of the garden route are very supportive and generous. We hope many people will be able to visit our team at Knysna Mall this week and also from 16 May to 20 May. It’s the donations from private individuals in Southern Africa and the world that enable MSF to maintain independence, impartiality and neutrality in our medical work in more than 60 countries where we work,” says Kelly Barlow, the MSF Southern Africa travel teams co-ordinator.

During the visit, the team will also raise awareness about the organisation’s work of delivering emergency medical aid to people affected by conflict, epidemics, disasters or exclusion from healthcare. Residents will also have an opportunity to see the medical equipment and items MSF medical staff use in the field as these will be showcased during the visit.

Kelly says their tour so far has been great because they have received a lot of support from residents of Port Elizabeth and Mossel Bay. They are very excited to be in Knysna and look forward to great interactions with the residents.

She hopes they are able to get more in the week that they will be in Knysna and create greater awareness for the organisation.

MSF works in more than 65 countries, including South Africa and it relies on funds from private donors who contribute regular donations from as little as R15 on a monthly basis.

The organisation has three projects in South Africa including in ‘Khayelitsha in the Western Cape, Eshowe in KwaZulu-Natal where it works in close collaboration with local authorities to provide care to people living with HIV and tuberculosis as well as in Rustenburg where we give comprehensive care and treatment to survivors of sexual violence. The clinic offers a comprehensive approach meant to overcome the barriers that discourage victims from seeking medical care. 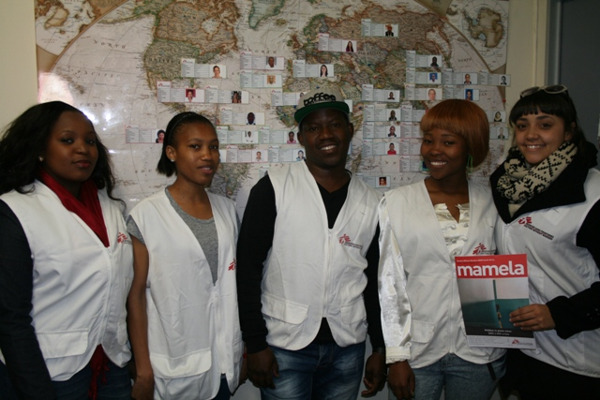