Two months have passed since the announcement of a ceasefire in Yemen, but the situation on the ground tells a different story. Civilians continue to be severely affected by massive violence particularly in the densely populated city of Taiz where shelling, airstrikes, bomb blasts, landmine explosions and sniper fire remain a daily occurrence.

Since the ceasefire started in April, Doctors Without Borders (MSF) facilities and supported hospitals treated about 1, 624 people who sustained severe injuries as a result of the intense fighting in Taiz – nearly half of them were civilians.

Just a week ago, 122 people were wounded and 12 died as a result of intense fighting in the city just in one day. Between March 2015 and March 2016, MSF treated more than 8, 000 patients in all its supported hospitals in Yemen.

The humanitarian needs continue to grow since people have very limited access to healthcare, there is no electricity, food and other commodities are only available at inflated prices.

MSF is calling on all warring parties in Yemen to ensure the safety of civilians and reduce the intense fighting and facilitate unrestricted humanitarian access into Taiz.

Read a PRESS RELEASE giving more information on the situation in Taiz here: http://bit.ly/1WMqt3j
A selection of POWERFUL HIGH RES PHOTOS
Below is a  FEATURE ARTICLE by Helmut Shoengen, an MSF anaesthetist in Aden, Yemen

NOTE TO THE EDITORS

MSF Southern Africa has deployed a total of 6 fieldworkers to work in MSF supported hospitals in Yemen since 2015. Currently two MSF Southern Africa nurses, are able to share experiences working under trying conditions and situation of people trying to survive the conflict.

àPlease contact us to arrange for interviews with them or for more information.

“This was the first time I was confronted with injuries caused by gunshots, grenades and mines – and they were often horrific injures,” reflects Helmut Shoengen, an anaesthetist/doctor who recently returned from working in Aden, Yemen with Doctors Without Borders (MSF)

“We treated many severely injured patients, men, women and children as well, with gunshot wounds to their heads, chests, abdomens, arms and legs. Grenade injuries were bad, because they often included burn injuries to the face,” Helmut said.

“But the worst ones were the mine injuries where limbs would just be ripped apart.”

MSF started working in Yemen in 1986 when high levels of poverty and unemployment combined with continuous insecurity made it difficult for Yemenis to access healthcare.

However, since the outbreak of violence in March 2015, many health facilities in Yemen have been damaged or destroyed, medical staff have fled, and transport has become extremely challenging due to high fuel prices and insecurity on the roads. MSF has provided urgent support to local hospitals through the Ministry of Health (MoH) and currently has 2020 staff in Yemen.

In Aden, MSF has been running an independent emergency surgical centre. Between March 2015 and March 2016, MSF alone received more than 8,000 injured.

But shifting front lines, severe political insecurity, lack of functioning medical facilities and few ambulances means that accessing urgent medical care is virtually impossible for many caught in the conflict.

“Occasionally patients would arrive from a long way away. They would sustain an injury and then travel for a number of hours in pain. And once they arrived, often all we could do was amputate,” Helmut said.

“And you could say these were the lucky ones because they had made it to the hospital.”

But while their lives were saved, their wounds created other complicating factors.

“…these were the lucky ones because they had made it to the hospital.”

Aden is Helmut’s second placement with MSF. His first was in Jahun, Nigeria in 2015. It was another surgical placement but a very different one.

“They are very, very different projects,” Helmut said. “Both are established hospitals but Aden became an acute trauma centre when the conflict began last year. In Jahun we worked in a section of a Ministry of Health hospital that was ‘given’ to MSF. There we treated almost exclusively obstetric patients and newborns. The aim of the project in Jahun is to reduce maternal and neonatal mortality and take care of some gynaecological emergencies as well. There you were just very busy because every day 10, 20, sometimes more patients would come through the door, some of them in extremis, convulsing, bleeding, or having been in obstructed labour for days... So in Jahun there was a constant stream of patients coming in while in Aden they arrived more in waves. There would be a day or two where it would be quiet where you would think ‘Oh, the fighting has finally stopped’. But no, the next day there would be another wave and it would start all over again.”

The mass casualty scenario of Aden required the medical teams to triage patients into four categories: black for those who could not be saved; red for those needing urgent surgery or treatment; yellow for those whose treatment could wait up to 12 hours; and green for those that could walk, suggesting relatively minor injuries.

It also meant that there was no typical day. “While there were routine tasks,” explains Helmut, “I knew I could be called out by the local doctors or nurses at any time, day or night – and I was many times.”

“You don’t change the world but you make a huge difference for that one patient you are treating at the time.”

Surgery and anaesthetic placements with MSF are short, usually four to six weeks, and for good reason.

“It is exhausting working in the field. You’re basically on 24/7 which is okay when it is for a limited time but it is difficult to sustain that level over a longer period,” Helmut said.

“These experiences remind you of how extremely well off we are with our easy access to unimaginably good health care. It’s very humbling.”

“You don’t change the world but you make a huge difference for that one patient you are treating at the time.” 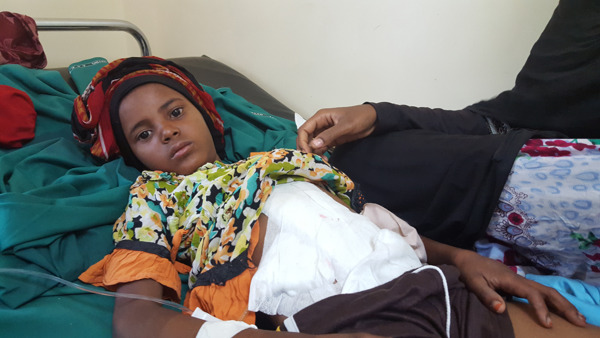