Thursday, December 7, 2017 — In South Africa today, nearly 4 million people are on antiretroviral drugs (ARVs), the largest HIV patient cohort in the world. At the same time, in West & Central Africa (WCA) – where researchers, policy makers, clinicians and activists meet at the largest AIDS conference in hosted in Abidjan this week – 4 million people remain undiagnosed and untreated for the disease.

In an era of freely available lifesaving anti-retroviral therapy and ‘test and treat all’ my colleagues at MSF still see too many people are dying of AIDS.

In WCA, by the end of 2016, only 42% of people living with HIV had access to testing, 35% of people diagnosed were receiving lifesaving ARVs, and only 25% were ‘virally suppressed’. At our clinics in the region, we increasingly see people who had been on treatment, but stopped. When they return to care, they will likely be resistant to their treatment. We are failing patients if we do not provide them with efficient, timely treatment.

In fact, each person with AIDS we meet at MSF’s waiting and emergency rooms in Democratic Republic of Congo (DRC), Guinea and Central African Republic (CAR) tells a story of terrible failure: the failure of the health system to deliver lifesaving ARVs in time and without interruption.

A staggering range of obstacles still stand between people living with HIV and their access to lifesaving treatment – including pervasive stigma, legal and policy blockages and a reluctance to include civil society and communities in improving and expanding HIV response. Ongoing conflict in countries like CAR or parts of DRC adds further complexity.

Yet, by far the biggest obstacles are the recurrent supply issues and stock-outs of HIV drugs; the high costs patients face – and the dwindling levels of international funding, which stands in stark contrast to political commitments made to boost HIV response in the region. In July for instance, African heads of state endorsed the UNAIDS-led Emergency catch-up plan to accelerate HIV treatment in WCA. Now, five months later that commitment is worth little more than empty words if it isn’t matched by action.

On the ground, our staff witness the impact of stock-outs and a lack of funding. In DRC, shortages of drugs and diagnostics implies that people can’t be tested or started on treatment. Those already on treatment face the risk of developing opportunistic infections or viral resistance, which greatly reduces their chances of survival.

Many supply systems of WCA are neither flexible nor reactive to the demands of people living with HIV. Supplies frequently remain stuck at central distribution points, never actually reaching those in need.

User fees at clinics also hinder access to treatment. In several countries in the region, patients are asked to pay for consultations, for access to their files, or for required tests and drugs against opportunistic infections. These payments prevent them from starting ARVs or continuing treatment. Those who – avoiding treatment due to high costs – fall ill and require hospital care, face catastrophic expenses.

At MSF’s AIDS centre in Kinshasa, DRC, a 2016 study found that payment for treatment and drugs was a major factor behind why late-stage AIDS patients developed advanced stages of the disease, and still delayed seeking care.

In Bangui, CAR, people living with HIV recently told MSF they were deterred by the US$2.7 (R37) cost for HIV testing and the US$9 (R122) cost for a month’s supply of ARVs – a fortune to many people. As a result, many remain untested or, once on treatment, they become defeated and give up on care.

Overall, the resources required for a credible HIV response remain far below what the region needs to achieve the targets agreed to by governments. A “substantial financing gap” (according to UNAIDS) today threatens the region’s progress and might even endanger positive results obtained.

Moreover, there is much uncertainty around whether the Global Fund’s next allocation will provide enough support to ensure the acceleration needed in WCA. As most countries’ allocations are expected to either remain the same, or decrease, some fear they will have to lower initiation rates instead of the planned acceleration, which will have drastic consequences for people living with HIV.

Funding and support for civil society, including associations of people living with HIV, is also under threat, in spite of the wide recognition of their pivotal role in the response, as Treatment Action Campaign did in South Africa. In WCA, this will further undermine the key role of civil society in expanding HIV testing, treatment, and monitoring services.

Without rapidly and effectively tackling these challenges, it is clear that the regional emergency catch-up agreed to in July will remain nothing more than a empty rallying call. More importantly, it means people won’t receive the treatment they need, and the lives of millions in WCA will remain desperately ‘out of focus’.

Doctors Without Borders (MSF) currently supports over 230,000 people living with HIV in 19 countries throughout Africa, Asia and Eastern Europe, with a focus on free quality care. This includes test and treat approaches, improved adherence support and differentiated models of care. 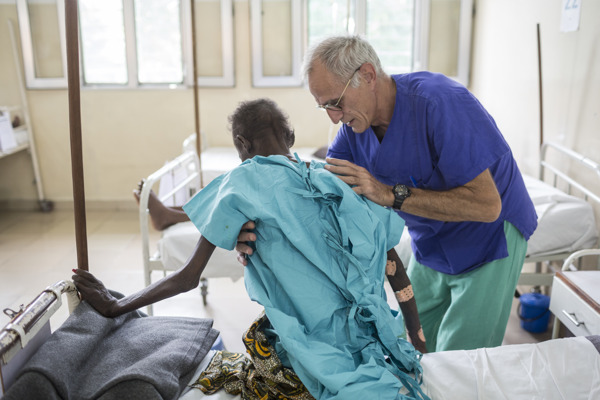