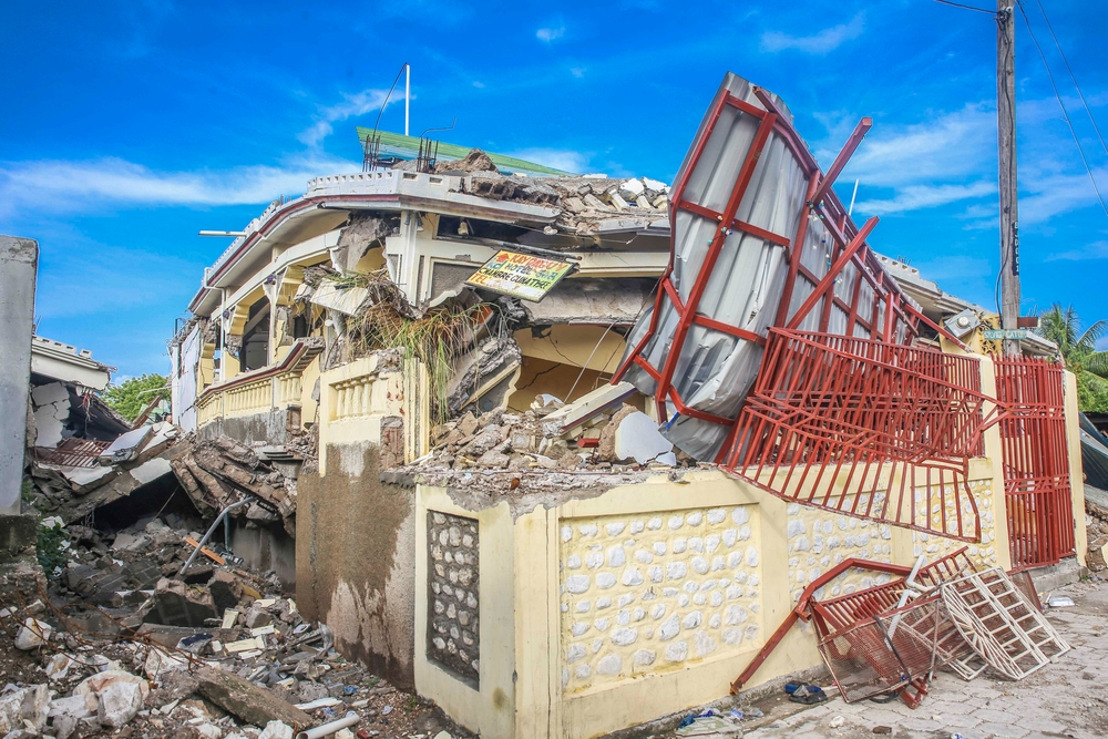 Friday, August 20, 2021 — On Saturday August 14 at 8:30 am local time, a magnitude 7.2 earthquake struck the southern region of Haiti, specifically the provinces of Grand’Anse, Nippes and Sud.  But the tremors were felt in other areas of Haiti, too.

The Haitian Civil Protection General Directorate (DGPC) says 137,000 families have been affected in the Grand'Anse, Nippes and Sud departments. According to UN OCHA, about 500,000 people – 40 per cent of the total population in the affected departments – are in need of emergency humanitarian assistance.

The provisional death toll is now nearly 2,000, according to Haiti’s Office for Civil Protection, and more than 9,900 people have been injured (as of August 18). These figures are only temporary and are expected to change in the coming days, as many municipalities in the affected areas remain isolated from the rest of the country, and landslides and flooding brought on by recent storms have caused additional damage and complicated search efforts.

In terms of buildings, nearly 61,000 houses were destroyed and more than 76,000 houses were damaged in the 3 most affected provinces (Sud, Grand ’Anse and Nippes) according to Haiti’s Office for Civil Protection (as of August 18), leaving thousands without shelter. Many public buildings (hospitals, schools, hotels, churches, private companies, etc.) suffered damage or collapsed.

According to initial assessments, 24 health facilities were damaged or destroyed by the earthquake (OCHA). Many hospitals had to evacuate their patients, and the facilities that continue to function are overwhelmed and experiencing a lack of medical equipment and medicines.

In the first hours after the earthquake, the MSF team based in Port-à-Piment and an emergency medical team from Port-au-Prince began assisting injured patients in Sud province. The hospital in Port-à-Piment where MSF runs a sexual and reproductive health (SRH) project was damaged. The patients, most of them present for maternity services, were evacuated to a tent where our team continues to provide care. In Port-à-Piment, MSF is also stabilizing patients injured by the earthquake, including patients MSF has managed to evacuate from nearby Les Anglais, which is cut off from the rest of the province due to road damage.

-In Les Cayes, the capital of Sud province, an MSF team is providing support to the general hospital with medical supplies and human resources.

-In Port-Salut, an MSF team is receiving patients with injuries and fractures, including patients referred from Port-à-Piment, Les Anglais and Les Cayes, and providing stabilization, surgical and follow-up care. 26 patients were received at this location on the first day.

-MSF has also sent emergency supplies (first aid kits, tents for emergency clinics, blood transfusion and plastering equipment, as well as medicines) from our supply stock in Port-au-Prince to Sud.  We continue to assess how MSF can provide medical and WASH services to more remote communities.

- A team arrived August 15 in Nippes, where we visited two locations. The first, the Sainte-Thérèse hospital in Miragoâne, had received 59 wounded of which a number were referred to Port-au-Prince for further care for open fractures. MSF gave donations to the hospital and an MSF surgeon and nurse are providing medical support. At the second location, the town health centre of Petit Trou, the team saw more visible damages including to the water system. Most people were staying outside, out of fear of further collapse of buildings including at hospital structures, with the majority of medical consultations taking place outside. MSF gave donations to the health centre and water trucking is being organised.

- On August 17, the team moved to a third location, Baradères, in Nippes to assess the situation. The town is almost cut from all routes, making it difficult to get aid and supplies in. Many families were observed sleeping outside near their demolished homes. There were also a few families attempting to build wooden structures. The hospital in Baradères had seen around 60 patients in the last 48 hours and around 15 were referred to St. Therese in Miragoâne for further treatment. The MSF team donated medical supplies and is trying find possibilities to access areas cut off from aid due to landslides blocking the roads.

-Some access routes, such as the road between Les Cayes and Jérémie, are seriously damaged, and complicate the deployment of aid. MSF is preparing to move supplies by sea and air due to the difficulties with the road. A medical team, including two surgeons and an operating room nurse, was able to travel to Jérémie on August 15 and began working in St. Antoine’s hospital, completing 10 surgeries in the last two days. MSF brought medical supplies, including sterilization material, for the medical facility. An MSF team also assessed needs in the hard-hit communes of Corail and Pestel, which is 80 percent destroyed, according to local authorities.

In Port-au-Prince, the earthquake fortunately did not damage any infrastructure or buildings. However, injured patients from affected areas have come to the city for care.

-MSF is treating injured people in our trauma hospital in Tabarre. As of August 18, about 20 patients injured in the earthquake are being treated in the hospital.

-On August 15, MSF began providing stabilization care to injured patients at a new emergency centre in the Turgeau neighborhood of Port-au-Prince at the Integrated Diagnosis and Treatment Centre (CDTI), commonly known as the Sacré-Cœur Hospital, which wasn’t scheduled to open until later in the week. On the first day, 30 injured patients were admitted.

-To address potential blood shortages, MSF quickly launched a blood collection campaign in Turgeau on August 14 just hours after the earthquake, in partnership with local authorities.

-MSF will continue to reinforce its activities in the coming days. International emergency staff, including emergency coordinators, medical teams (including trauma surgeons) and WATSAN/logistical experts have begun to arrive.

-Teams at MSF Supply in Brussels are preparing approximately 80 tons of material to be sent to Haiti via two planes set to arrive this weekend. The cargo includes items for setting up emergency medical structures and offices for our operations using tents; materials to install emergency drinking water supply systems for at least 30,000 people; and medical supplies for the care of 30,000 patients, including items for stabilisation, first aid, vaccination and blood collection.

MSF has been present in Haiti for over 30 years. Our regular activities continue, including at the Tabarre hospital in Port-au-Prince, where MSF is treating severely burned patients as well as people with life-threatening injuries. MSF also provides maternal and sexual and reproductive health care in Port-a-Piment in Haiti's Sud province and treats victims of sexual and gender-based violence in Port-au-Prince and Gonaïves.

After more than 15 years, MSF was forced to close its emergency center in Martissant, Port-au-Prince, after an armed group fired on the facility on June 26, putting medical staff and patients at risk. Earlier in the year, MSF was forced to relocate its burns hospital from Drouillard to Tabarre due to insecurity.