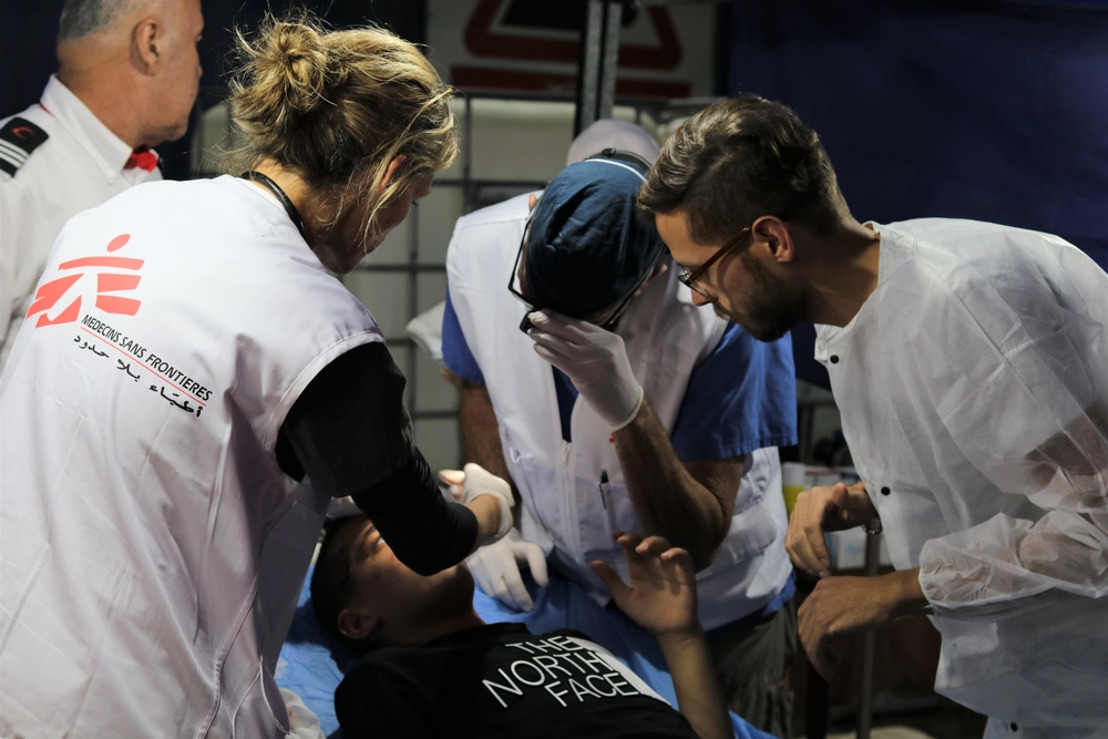 Tuesday, May 18, 2021 — On Sunday, May 16, 2021, Israeli air strikes in the area of the Doctors Without Borders (MSF) clinic in Gaza city killed at least 42 people, including 10 children, according to the Gaza Ministry of Health. The bombing in the area also damaged our clinic, leaving a sterilization room unusable and a waiting area damaged. No one was injured in our clinic, where we provide trauma and burn treatment.

An MSF staff member who was present described a scene of utter horror as huge explosions shook the neighbourhood and women and children ran out onto the street screaming and crying.

“The situation has already been horrible this week, with the number of civilian casualties rising daily, but when I saw the damage to the area and the MSF clinic the morning after the attack, I was speechless,” says Dr. Mohammed Abu Mughaiseeb, MSF’s Deputy Medical Coordinator in Gaza. “Everything was impacted – houses, roads, trees. The clinic, where we see over 1000 children a year with burn and trauma injuries, was missing a wall and debris was lying everywhere. The clinic is now closed not just because of the damage to its structure but also because the road to access it has been destroyed and because the area is still unsafe.”

Access to healthcare for casualties with life-threatening injuries is being severely restricted as Israeli air strikes have damaged many roads leading to hospitals. In addition, many medical staff are concerned for their safety while on their journeys to work and some medical supplies are running low. Two doctors were among the 42 people killed in the air strikes near our clinic.

“The horrendous attacks on civilians and civilian infrastructure that we are witnessing in Gaza are inexcusable and intolerable,” said MSF’s Head of Mission in the Occupied Palestinian Territories, Ely Sok. “The situation is critical. The number of wounded and displaced people is mounting while additional humanitarian personnel and supplies still cannot enter Gaza. The local health authority is reporting being 24 hours away from running out of blood bags, meaning they cannot transfuse patients with blood, a key intervention in caring for war wounded.”

An MSF team is working in 24-hour shifts to support the medical staff in the emergency room and operating theatres of Al-Awda hospital, in the area of Jabalia, and are treating 40 to 45 patients with deep wounds and severe burns daily. MSF also donated medical supplies to various medical facilities in the Strip over the course of last week. Insecurity means that we cannot operate our normal burns and post-operative trauma care programs.

As Israel continues aerial and artillery bombardment of Gaza, over 38,000 Palestinians have fled their homes for safety according to the United Nations, and at least 2,500 people have become homeless, including some MSF staff. Many of our staff has found refuge in their relatives' homes, but MSF has found temporary shelter for those ones who could not.

“Israel needs to stop these attacks in the heart of Gaza as we have seen time and again that they kill civilians no matter how “targeted” they are, as in such a densely populated place it is not possible to limit the effects of the bombing,” said Sok. “Safe access for humanitarian staff and supplies also needs to be urgently arranged.”