Tuesday, March 6, 2018 — We have already alerted you to the dire consequences of the intense bombing of the besieged East Ghouta, near Damascus in Syria - mass-casualty influxes as hospitals & clinics run out of life saving medicine.

Reports from MSF supported facilities indicate that from 18-15 February, more than 3,700 have been wounded and more than 700 dead. Millions of people the world over have taken to social media expressing solidarity with civilians caught in this nightmare.

In South Africa we’ve seen a limited level of reporting on this situation and we’re offering you the opportunity for first hand insights on current situation.

How? By putting you in touch with someone who has extensive knowledge of what’s currently happening in Syria. Jonathan Whittall, a South African working as MSF’s director of analysis, has been involved in MSF’s response to the Syrian war for the past six years.

We are offering interviews for key media to share information and perspectives on the following:

Over and above the aforementioned, Whittal has recently worked in Mosul and can therefore talk more broadly about the use and impact of siege tactics in conflicts?

Are you interested in a telephone, Skype interview? Can we arrange this for you?

Jonathan Whittall is currently Director of the Analysis department for the MSF Operational Centre in Brussels. The Analysis Department conducts research, develops advocacy strategies and provides strategic operational support on the thematics of migration and refugees; the politics of health; humanitarianism and conflict; and negotiated access.

In this role, and in his prior role as Head of Humanitarian Analysis, Jonathan has worked extensively on providing strategic support to MSF operations in Iraq, Afghanistan, Lebanon, Syria, Ukraine and South Sudan, among other conflict contexts.

He previously established and headed the organisation’s Programmes Unit in his home town of Johannesburg, South Africa. Following this he was involved as an Emergency Coordinator in MSF’s medical humanitarian responses in Libya, Bahrain and Syria.

He has contributed to academic journals and newspapers on the politics of humanitarian aid. He holds a Masters degree in Humanitarian Studies and a PhD from the Liverpool School of Tropical Medicine.

MSF directly operates five health facilities and three mobile clinic teams in northern Syria, and has partnerships with five facilities. MSF also provides distance support to around 50 health facilities countrywide in areas where teams cannot be directly present, including regular support to 11 facilities in East Ghouta as well as emergency one-off medical donations to other facilities when they are in dire need.

No MSF staff are present in supported facilities. MSF’s activities in Syria do not include areas controlled by the Islamic State group since no assurances about safety and impartiality have been obtained from their leadership, nor can MSF work in government-controlled areas since MSF’s requests for permission to date has not resulted in any access. To ensure independence from political pressures, MSF receives no government funding for its work in Syria. 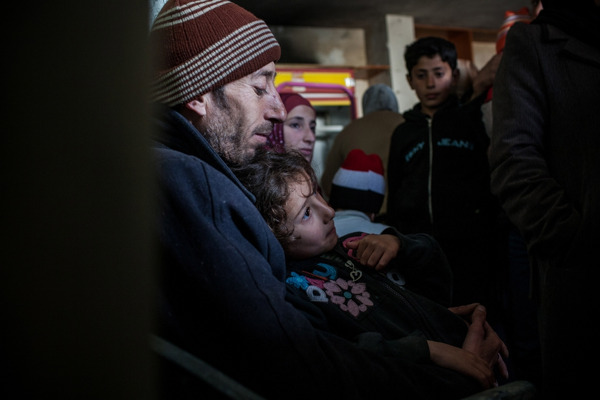