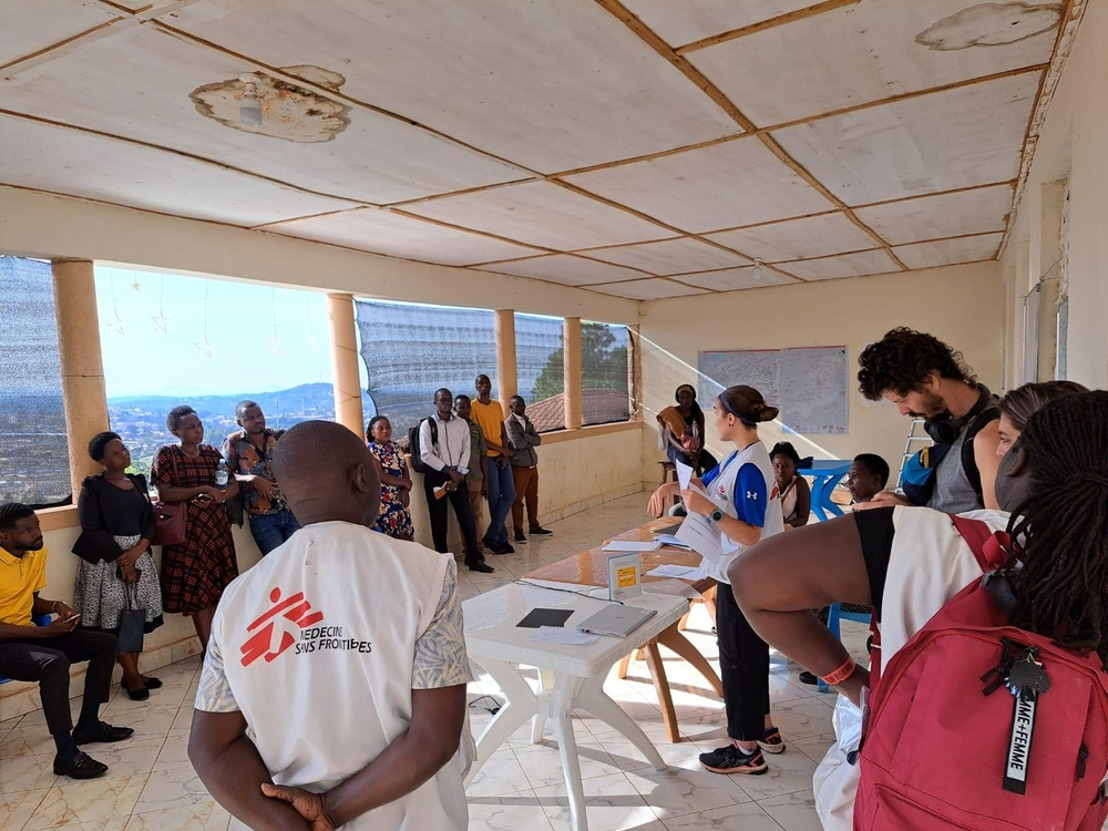 It has been 11 days* since the last confirmed Ebola case, a stillborn baby of a mother who survived the disease, was reported in Uganda. MSF has been responding to the outbreak of the Sudan ebolavirus variant since its declaration on 20 September by building Ebola treatment centres and treatment units, providing support to the Ugandan Ministry of Health for case management in these facilities, as well as conducting community outreach activities like health promotion and infection protection and control measures in health facilities where known patients sought help prior to diagnosis.

Denis Ardiet works for Epicentre, MSF's epidemiology division. He currently coordinates a team of seven epidemiologists involved in the ongoing Ebola response in Uganda. His job involves rigorous analysis of the epidemiological situation and the different possible scenarios in this outbreak in order to enhance MSF and the Ugandan Ministry of Health’s response.

*Note to editors: ensure that the number of days is updated correctly from 27/11/2022 before publishing

What is the current trend of the outbreak in Uganda?

In terms of trends, we saw two important peaks in the outbreak. The first one was in September in the Mubende district which was the first epicentre of this outbreak, and then another followed in the neighbouring district of Kassanda. While cases in these two districts alone represent 80 percent of all cases detected so far in this outbreak, overall nine districts in the country were affected. Historically, this is the largest geographic spread of Ebola Uganda has ever faced.
​

After a steep rise of cases in October (86 cases over 4 weeks), the outbreak slowed in terms of numbers of new confirmed cases in recent weeks (14 cases in 4 weeks in November). However, we are very concerned that we had several Ebola cases that were not linked to any known chains of transmission – meaning they had acquired the infection from a source which was unknown at the moment they were found, and that the response could not foresee these cases as they should have been through contact tracing and follow-up. This led to two new districts being affected, Masaka and Jinja.

The follow up of case contacts is extremely important to control an outbreak. When we are on time in being able to identify all the people who were in contact with a confirmed case, we can monitor their health and help them to seek care swiftly at the right health facility in case Ebola related symptoms develop. Yet, according the Ministry of Health data only around 64% of case contacts were initially followed-up, pointing to gaps in this crucial part of the response. While the overall epidemiological trend is now positive, we remain concerned and vigilant about what could still happen.

What are possible future scenarios? ​ What efforts will be required?

There is not ‘one way’ this could go. Anything is still possible... Scenario one is that we see a continued downward trend and no more new cases as we approach the end of the epidemic. Scenario two is that occasional new cases emerge here and there, perhaps in different districts. And scenario three is that there is an increase in new cases moving toward another peak in transmission.

All of these different scenarios will require corresponding operational responses from MSF teams and Ministry of Health teams with whom we work with very closely. We rely very much on their data, especially since we do not run our own laboratory testing or our own case investigations. Together we work on health surveillance actions crucial to the response.

How best MSF can support the Ugandan health authorities depends on the needs in the current situation. We must evaluate what makes the most sense and we might switch to a smaller scale rapid response team-approach. This could be a more community-based approach closer to where patients live rather than having sizeable treatment centres set up within the districts.

It is also essential to ensure that non-Ebola care continues in the affected areas and that curative and preventive management of malaria cases is in place, given that initial symptoms for Ebola and malaria are similar. We support the Ministry of Health in reinforcing case detection and isolation capacity in existing health facilities so they can react promptly to any new alert or case and quickly reduce the chances of wider spread. On the community side, the Ministry of Health sustains health surveillance to make sure there is no ongoing transmission. All these efforts must be vigilantly maintained until the epidemic is officially declared over – after 42 days without new cases, or twice the ebolavirus incubation period of 21 days.

It is always difficult foresee the end of an outbreak because you deal with the unknown. We never know everything about the epidemiological puzzle and we can only make sure we gather as much relevant information as possible. We are aware of the epidemiological situation and we see that the epidemic curve has descended, which is good. But behind this curve, there may be events and information we don’t know – and that is the difficult part to uncover. Regardless, we must be prepared and reactive to respond to any alert or new case.

Is a rapid decrease in cases unusual in Ebola outbreaks?

It is not unusual since it has been observed during other outbreaks, even though it remains surprising considering all the unknown elements in the Uganda outbreak. Such a decrease may reflect that transmission has stopped through a combination of several factors, including the outbreak response and community actions. This outbreak reminds me a bit of those in Conakry in Guinea in 2015 or Beni in the Democratic Republic of Congo in 2020. The health authorities and their partners, including MSF, also had difficulties in following up all case contacts back then, and despite decreasing trends, the final few cases popped up sporadically for some months.

It is important to mention that the initial low rate of case contact follow up in Uganda has in fact improved over the last weeks in several districts. While that is a good sign, it still seems that the response often focuses on demanding community adherence to follow up either through obligatory quarantine or home isolation and daily calls which can scare people when empathetic and comprehensive health messages that explain the rationale of these measures is not shared. Health promotion and community outreach activities play an essential role to bridge this trust gap and ensure that people have sufficient information about the ebola virus to protect themselves and their communities, and to better understand the measures.

Usually – as can be the case in any outbreak and as we also saw with COVID-19 – there is a lot of fear around the prospect of being removed from your family and friends, isolated and sent to an Ebola treatment unit. Health promotion and community engagement help to counteract rumours and fears while supporting the prevention of community transmission.