Wednesday, August 23, 2017 — In 2016, MSF researcher Emilie Venables spent several weeks conducting in-depth interviews with patients admitted to MSF’s 42-bed AIDS unit in Centre Hospitalier Kabinda in Kinshasa, as well as care-givers and health staff. Her research uncovered a complex, often heart-breaking web of challenges faced by people living with HIV in the Democratic Republic of Congo (DRC), a low HIV prevalence context where the disease is highly stigmatised. In 2016, the unit treated 2500 AIDS patients, many of whom arrived so severely ill that 30% of them died after admission.

August 2017 - The hospital register lists the weight of patients on admission:  many weigh less than 40 kilograms, others less than 30 kilograms.  A patient in her thirties jokingly lifts up her hospital gown and laughs as she shows me the nappy she’s wearing underneath.  Another woman is wheeled into the ward unconscious, wrapped in what I can only describe as a space blanket.  During my visit, others are wheeled out through the same door they used on arrival, but this time, covered in white sheets and followed by wailing relatives, as a hushed silence falls across the rest of the ward.

Seeing people dying of advanced HIV, or what is commonly referred to as AIDS, is routine for the staff in the hospital where I was conducting research.

There are no easy answers.  My interviews with healthcare workers, patients and their care-givers revealed a tangled web of individual, community and health centre level barriers that prevented people from seeking the clinical care they so desperately needed.

I was told people don’t go to health centres when they first become sick because of high costs, lack of knowledge and information about HIV, religious beliefs and, above all, because of stigma.

It’s frustrating to still be writing about HIV-related stigma in 2017.  Stigma – and the discrimination that accompanies it – have been common themes in HIV since I began working in the field as an anthropologist in the late 1990s. Unfortunately, it’s no different in Kinshasa today.

Stigma is about shame, guilt and fear, and often stems from a lack of knowledge or understanding.  It’s stigma that stops people from seeking an HIV diagnosis when they fall ill.  People don’t tell those around them they have HIV because they’re afraid of being associated with something believed to be shameful. As a result, they don’t receive the medical and psycho-social support they need.

Care-givers – usually mothers, daughters or sisters of people living with HIV – were frustrated to learn of the diagnosis so late. They felt they could have prevented their relatives from suffering if they had known earlier.  Some relatives suspected the person they were caring for was HIV positive, but didn’t want to ask. They were too afraid of hearing the answer they believed meant their loved one would die.

Others didn’t suspect, or preferred not to see, for fear that HIV would bring shame on themselves and their family.  One family saw the hospitalisation of their now-teenage son as a waste of time, saying he was going to die anyway.

HIV remains a synonym for death in Kinshasa, and there is limited knowledge that someone with HIV can live a normal and healthy life.  Unlike in South Africa today, where billboards proudly display images of people living with HIV, and AIDS activists have had a strong voice for many years, people in Kinshasa aren’t exposed to this kind of information. If they are, it is on a much smaller scale.  HIV remains shrouded in mystery and fear.

Religion is extremely important to people in Kinshasa but it can also be damaging for those living with HIV.  The church plays an essential role in people’s everyday lives; it is a source of support, a community, a place of sanctuary.  But some churches prevent people from seeking an HIV diagnosis, or from taking their treatment.

I was told of pastors advising people to throw their pills away.  Some people I spoke to had relatives who had disappeared to attend church camps that claimed they could cure them. MSF’s HIV counsellors work within a difficult framework: they need to respect individuals’ belief systems, while teaching them about the life-saving impact of antiretroviral treatment (ARVs) and the importance of adhering to their daily treatment.

The issue of cost can’t be ignored when looking at why people are hospitalised.  I was shocked to hear during my interviews with MSF staff that they believed health-care workers in other facilities were using HIV as a way of making money.

One clinician described health centres across the city as being “like a boutique”, where patients were sent on the equivalent of a medicalised shopping trip. They had to pay for tests, drugs and consultations, while remaining powerless to question the diagnoses – and shopping lists – given to them.

Interviewees believed that many of these consultations were unnecessary and simply a way for some health-care workers to make money. Once someone is diagnosed as HIV positive in DRC, their treatment is free, but until that point, they remain in a system they can’t afford. It’s a system with the potential to benefit someone else.

Together, these individual, community and health-care system barriers create an environment in which it is incredibly difficult to be HIV positive. MSF’s medical staff were frustrated that their patients arrived so close to death, as it was harder to treat them. Care-givers were angry that their relatives had waited so long to seek treatment and patients felt powerless to ask for more information in a system that had passed them back and forth for so long.

Addressing these issues of stigma, cost, limited HIV knowledge and a weak health-care system is complex. Potential solutions to the problem of advanced HIV go beyond the walls of MSF facility into the wider community and beyond.  There is a need to focus on stigma reduction at a community level, while giving patients, their relatives and health-care workers information about HIV.

People testing for HIV and taking ARVs need to know about their treatment and have ongoing counselling. Civil society and community organisations – such as those we see in South Africa – do not grow overnight, but through taking small steps, such as people living with HIV sharing their stories with their communities, and working with local religious groups, communities can work together to reduce stigma and enable people in Kinshasa to access the lifesaving treatment that they so urgently need. 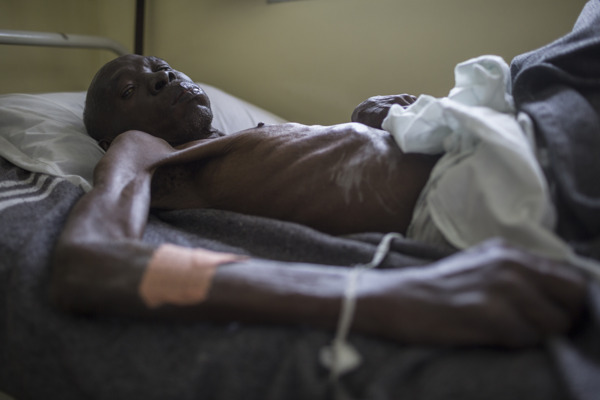