Monday, August 21, 2017 — During my recent visit to Kasai I went with our teams to a rural part of the region that has been particularly affected by violence. Villages and field have been burnt and several mass graves have been discovered there. A man approached us and said very simply, in a composed manner, “The violence was so terrible here that we didn’t hear the birds sing for days.”

Yet when I first arrived I got the impression that nothing had happened here. Kananga is a fairly typical, bustling Congolese town of around 750,000 people. The markets were full and loud music played from the small shops.  This was certainly not the situation that my colleagues discovered in March this year.  Silence filled the town. Not a single school or shop was open. Fear was everywhere. In the end, I realised that the normality I was witnessing in the town was similar to the experience one has visiting the site of a loved one’s grave a year after their burial when the grass has started to regrow over the tomb. Life has taken hold again.

There are other images from this visit that have stayed with me. I remember seeing a teenage girl laughing and running after other children along the hospital corridors. It was as if nothing had happened to her. But several weeks before, her sister had been decapitated in front of her eyes. The armed men took her away and kept her tied up on the floor for ten days. They raped her so many times it’s impossible to say how many. “If you speak, we’ll cut your head off like we did to your sister” they told her. What is clear is that the people of Kasai have lived through so much, it’s barely imaginable.

The crisis in Kasai started a year ago, but it’s taken a lot of time for us to realise its magnitude. During the worst months, no humanitarian aid arrived here – and now it’s still extremely limited. Why did communities not ask for help sooner? A village elder replied: “When you are lying on the ground and people are shooting at you, you can’t get up and run.” We at MSF only started to work in Kananga in March – very late, too late surely – and today we are still conscious that we are just scratching the surface of the problem.

The wounds of the patients that MSF treats tell us about the extreme levels of violence that the people of Kasai are facing. Out of fear, some grievously injured people have waited days, weeks before trying to see a doctor… For example, one of the patients our surgical team treated had his hand cut off. He hid in the bush for several weeks, afraid of being found and killed, treating his stump with traditional medicines. By the time he arrived at our hospital, an abscess had formed and a serious infection had developed in the bones of his forearm. His chances of avoiding a further amputation are slim.

If our mental health teams ask what has happened, our patients never tell us who has inflicted this violence – the fear is always there – but they tell us their stories, invariably awful: your husband decapitated in front of your eyes, your wife raped in front of you and your children while you are tied up, forced to watch. But they only tell it once. Afterwards, it is always the same three questions that come up: how can I earn a living, feed my family, rebuild a home. What is my future.

The crisis in Kasai is like a forest fire during the driest summer months: one spark in August 2016 has ignited the whole region. Millions of people have been caught in the trap of militia attacks, army repression, and even localised conflicts which have nothing to do with the initial spark but have exploded due to the chaos that reigned. And if today Kananga is returning to normal, very worrying noises are still coming from other places in this region the size of Italy. The lack of access due to security problems makes it difficult to tell the difference between rumour and reality. What is certain is that even if from the outskirts it seems as if nothing has happened, a human tragedy has unfolded – and is still unfolding.

Note to the editors

MSF independently manages the 70 bed trauma wing of the Kananga General Hospital (Kasai Central province). The team rehabilitated the operating theatre and offers free care for victim of violent and accidental trauma. Since April 2017 238 patients were hospitalized and 550 surgeries where performed. MSF also runs mobile clinics in the countryside around Kananga which have to date provided 9146 consultations.

Since June, MSF has been supporting three health centers and one general reference hospital in different areas of the city of Tshikapa, in the Kasai province, with a focus on providing assistance to children under 5 years of age, to pregnant and lactating women, the wounded and people in medical emergency caused by the violence and its consequences. In July, the teams expanded activities to different rural areas in the periphery of Tshikapa.

MSF teams are also carrying out mobile clinics in rural areas surrounding Dibaya and Tshimbulu, in the south of Kasai Central. The original epicentre of the crisis, many villages have been destroyed and populations fled into the bush, leaving people in an extremely precarious health situation. 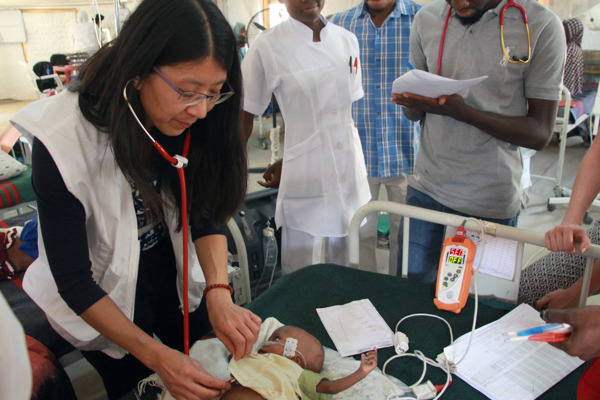