Wednesday, June 22, 2016 — A group of Doctors Without Borders (MSF) fundraisers will visit East London from 28th June to 4th July as part of its three weeks-long tour to raise funds and awareness about MSF’s emergency medical humanitarian work around the world in the three Eastern Cape towns.

“We have visited the Eastern Cape during the last three years, and we always look forward to this tour because people of this province always support our work with such generosity. We would love to see East Londoners visiting our team at the Hemingways Mall during our week-long stay there. It’s the donations from private individuals in Southern Africa and the world that enable MSF to maintain independence, impartiality and neutrality in our medical work in more than 60 countries where we work,” says Kelly Barlow, the MSF’s Southern Africa Travel Teams Coordinator.

Shoppers will get a chance to interact with the fundraisers at Hemingways Mall in East London and know more about MSF's work abroad and in South Africa, including our HIV and TB projects in Eshowe in KwaZulu-Natal and Khayelitsha in the Western Cape, as well as our project in Rustenburg which treats survivors of sexual violence.

The team will also visit Grahamstown during the National Arts festival from 5th to 11th July where they will showcase some of MSF’s work on migration by hosting an exhibition depicting healthcare for people on the move and in displacement camp settings.

The exhibition – which will be held at the Village Green between 5th to 9th July – shows the physical aspects of a refugee camp, helping people to understand the experiences and challenges of those who are forced to flee their homes to seek protection in other countries. People have an opportunity to touch or even taste various things used in actual refugee camps.

During the festival, three MSF staff will host a panel discussion at the National Arts Festival’s Think! Fest program (a series of lectures, forums, seminars and debates that runs for the duration of the festival). The MSF team will talk about our search and rescue operations in the Mediterranean Sea, the xenophobic violence that took place in South Africa in 2015, displacements in South Sudan, Central African Republic, Syria and Afghanistan due to conflicts.

MSF Southern Africa undertakes fundraising outreach tours three times per year in various provinces, including the Free State, KwaZulu Natal and the Eastern Cape where the organization does not have permanent fundraisers. 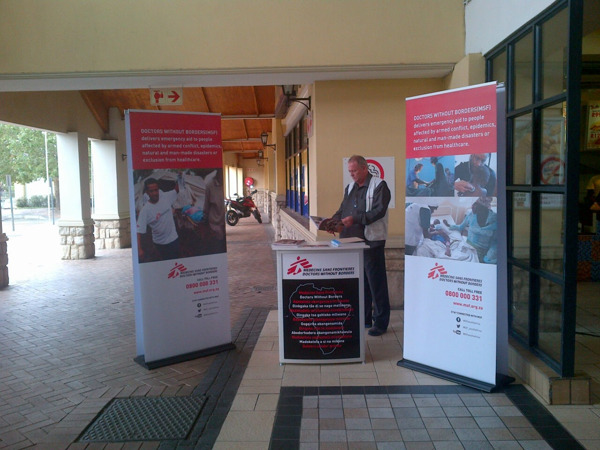