A group of Doctors Without Borders (MSF) fundraisers will give residents of Grahamstown a snapshot of our medical humanitarian action when they host an exhibition on the health needs of people forced to flee in displacement camps. This exhibition is part of the annual MSF Southern Africa fundraising tour coming to Grahamstown from 5 to 11 July.

The exhibition – a part of the fundraising team’s three week tour of three Eastern Cape cities – will be held at the Village Green in Grahamstown between 5 to 9 July during the National Arts Festival.

The display depicts the physical aspects of a refugee camp, which helps residents and festival goers understand the experiences and challenges of people forced to flee their homes to seek protection and refuge across borders in the wake of armed conflicts and unliveable conditions.

“With this exhibition we want to give people an opportunity to see and understand the reality of people who flee war and conflict, what their health needs are and the efforts of our fieldworkers worldwide to provide life-saving emergency medical care. Having MSF supporters touch or even taste the very tools we use in actual refugee camps enables them to experience some aspects of our work first-hand,” explains Kelly Barlow, MSF Southern Africa’s fundraising travel teams co-ordinator.

Shoppers and art lovers alike will get a chance to interact with MSF’s fundraisers at Peppergrove Mall, Checkers and at Village Green for the duration of the National Arts Festival. These MSF representatives will provide information about the international medical humanitarian organisation’s work globally and in South Africa including our HIV and TB projects in Eshowe in KwaZulu-Natal, Khayelitsha in the Western Cape as well as recently opened project in Rustenburg which treats survivors of sexual violence.

During the National Arts Festival, MSF Southern Africa staff will also feature at the annual Think! Fest program (a series of lectures, forums, seminars and debates).  Fieldworker Emily Venables and Sharon Ekambaram will speak about our search and rescue operations in the Mediterranean Sea, the rise of conflict-related displacement from Syria, Nigeria, Central African Republic and South Sudan – and the impact of increasingly inhumane European policies aimed at shunning refugees. 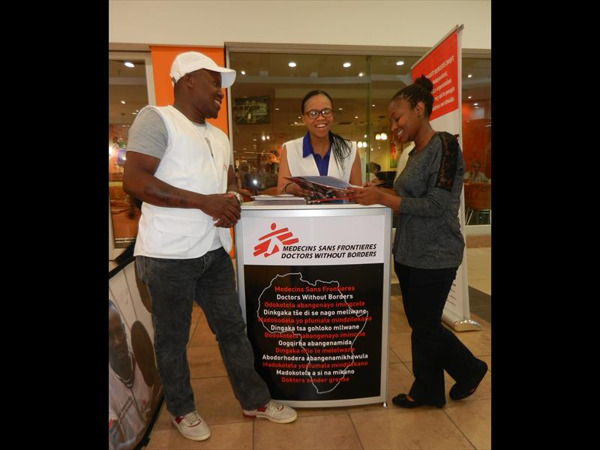