DURBAN– A six-member team of Doctors Without Borders (MSF) fundraisers will be visiting Durban from 6 September – 10 September. The purpose of the visit is to raise awareness around the reality facing people forced to flee and to educate the public on how MSF provides medical care through a unique exhibition depicting their lives in displacement camps.

The exhibition will take place at the Pavilion Mall (6-9 September), University of Kwa-Zulu Natal (8-9 September) and Essenwood Market (10 September), and aims to give visitors insight on what it’s like to be displaced and engage their senses through interactive elements.

MSF is an international medical humanitarian organisation providing medical care to people in conflict and crisis. MSF teams work in 69 countries worldwide bringing medical care to refugees and migrants in 23 countries, and those crossing the Mediterranean Sea to reach safety in Europe. MSF fieldworkers have also seen the dire situation and nutrition crisis confronting of the 500,000 people displaced in the conflict between Boko Haram and the Nigerian forces.

“Durbanites are not totally unfamiliar with people forced to flee. In 2015 over 7,000 people, mainly Malawians, Zimbabweans, Mozambicans, Congolese and Burundians, fled and sought refuge in three hastily erected displacement camps as a result of the xenophobic violence. Around the world today, more than 60 million people are displaced seeking help and protection after being uprooted because of violence and unlivable conditions.” says Kelly Barlow, MSF South Africa Travel Team Co-ordinator.

“The donations we receive are essential for our life-saving work both internationally and right here in South Africa. We are funded almost entirely on private donations and even the smallest amount can mean the difference between life and death to those suffering.” Concludes Kelly. 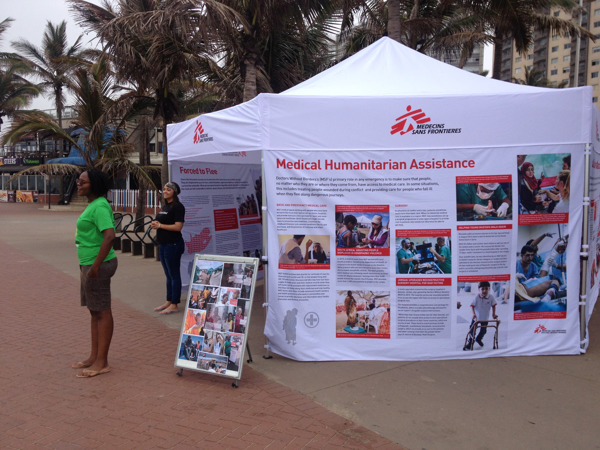