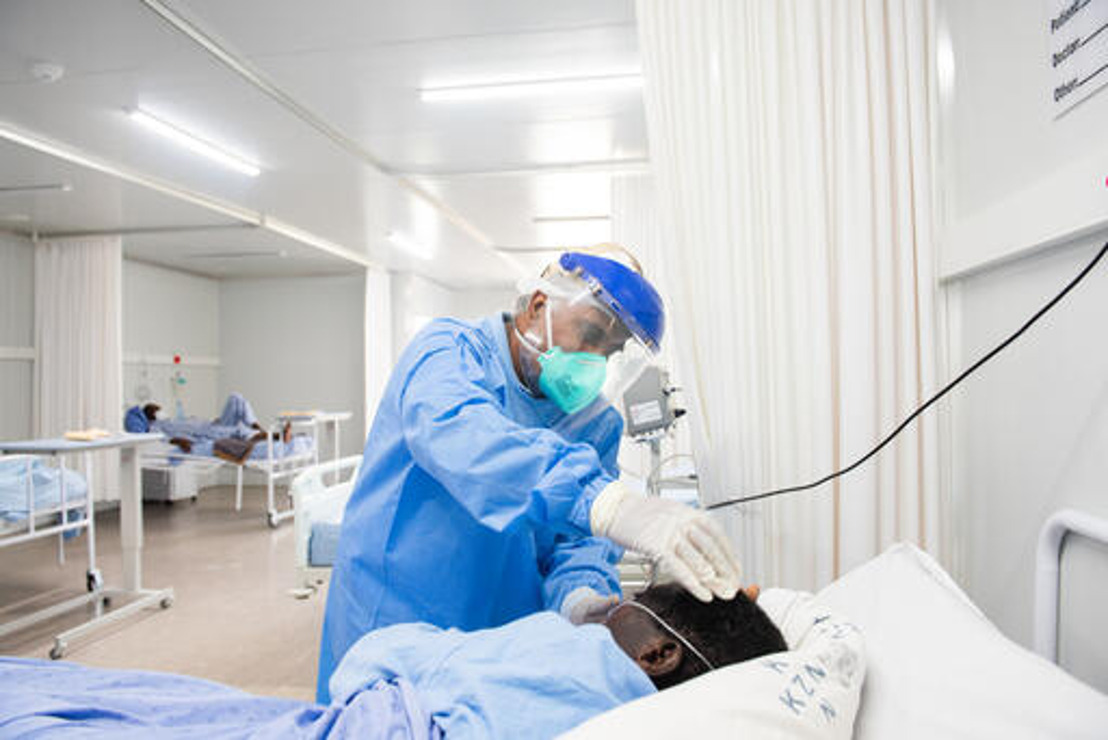 The second COVID-19 wave hit South Africa hard. Between October 2020 and February 2021, 17% more people were infected than in the first 8 months of the epidemic, and more people died, 26,000 in total.

The rapid spread of the new dominant variant 501Y.V2, which differs from the original by up to twenty mutations and is twice as transmissible, likely caused a more severe second wave than was anticipated. Vaccines are now being rolled out to frontline healthcare workers in South Africa but it is likely that more widespread vaccine roll-out will not have occurred before a new surge in infections in a third wave begins after April/May. To avert more deaths and struggles to ensure adequate care to thousands of COVID-19 patients, hospitals that were overwhelmed during the second wave must be better prepared, and their needs supported.

MSF staff working in the Eastern Cape witnessed the enormous toll that the first COVID-19 wave took on human resources working in public health facilities, in the form of burn out, absenteeism, illness and resignations, and how this hampered the ability of facilities to respond to the second wave.

“Hardly had the flames of the first wave died down and we were back in it, weary and with only a third of the staff we’d had in June,” says Dr John Black, the infectious diseases physician at Livingstone Tertiary Hospital in Gqeberha (formerly Port Elizabeth) in the Eastern Cape, which started to see a dramatic rise in COVID-19 patients in late October 2020, the first area in South Africa to experience a second surge.

Tellingly, a state-of-the -art COVID-19 ward in the basement of Livingstone Hospital, the city’s main COVID-19 referral hospital, stood empty at the peak of the second wave because of insufficient doctors and nurses to staff it. In order to cope, a very rapid injection of human resources was needed, specifically doctors and nurses with COVID-19 experience. The addition of an 10 person MSF team in mid-November enabled the opening of the basement ward, including several beds equipped with high flow nasal oxygen. According to Dr Emma Gardener, the hospital’s COVID-19 coordinator, the additional capacity, “meant that COVID-19 patients in the out-patient department could be put on oxygen faster, and the process of decongesting the overrun casualty ward could begin.”

Another key COVID-19 facility in Gqeberha under high pressure was the Rev Dr Elizabeth Mamisa Chabula-Nxiweni Field Hospital, established during the first wave in a decommissioned Volkswagen automotive plant. Here, only eight doctors were caring for over 300 patients at the peak of the second wave.

“Skeleton staffing meant that it was not possible to expand the services for high level oxygen care in the field hospital when this extra capacity was desperately needed in the district,” says Dr Peter Hodkinson, a volunteer from the University of Cape Town’s emergency medicine division, working with the MSF COVID-19 team.

With the addition of MSF staff, it became possible to wean many patients off oxygen, reducing patient numbers from 300 to 160 in a period of two days.

“With improved patient flow and more beds freed up, the overwhelmed hospitals in the area were able to refer more of the patients they were unable to manage,” Hodkinson says.

KwaZulu-Natal – The importance of supporting nurses

The second wave hit KwaZulu-Natal (KZN) in December 2020, at a time when South Africans traditionally travel between provinces in large numbers, and gather with family and friends to celebrate.

“The health system was caught off guard, with many staff on leave, many exhausted from the work of the first wave, and some now having to deal with a lot of festive season trauma cases. And of course it was the new variant, which meant people came in very quickly, one after the other,” says Dr Kwenzakwenkosi Shange, a physician based at Ngwelezana Tertiary Hospital, northern KwaZulu-Natal’s largest COVID-19 referral hospital.

To cope with the COVID-19 pressures, Ngwelezana requested additional human resources, and the Department of Health reacted, adding 8 community service doctors and a team of nurses.

“That made a huge difference, because we now had a stable team of doctors responding to COVID-19,” Shange says.

However, the rapid addition of inexperienced staff in an emergency situation can produce its own challenges, which MSF witnessed first-hand in the field hospital at Ngwelezana, a 113 bed COVID-19 facility in which MSF and Department of Health staff worked side by side from 11 January 2021. To bring order to a potentially chaotic situation, the appointment of an experienced nurse activity manager to organize the facility was essential. That person was Caroline Masunda, who has led MSF medical teams in Sierra Leone and Nigeria. “More trained nurses were needed, and those we had were also having to do basic patient care tasks such as bathing, hydration, feeding and bedpan support, in addition to giving medication, IV fluids and monitoring oxygen levels. The demands on their time were such that they were not able to fulfill all of these tasks,” she says.

To take pressure off the nurses, lay health care workers were employed to take care of basic tasks,

In Berea hospital in Lesotho, similar pressures on nursing staff were observed, and here MSF worked with the Ministry of Health to train a new group of 16 ward attendants to provide basic care for patients with COVID-19, while also helping with proning and other essential COVID-19 tasks.

In certain facilities where MSF worked during the second wave, medical staff noticed that patients were dying for avoidable reasons.

“People died because their nasal prongs and masks had come loose, and were not replaced by staff who did not notice. This particularly happened at night. We also saw people dying of dehydration and acute kidney injury because of a lack of drinking water at the bedside, or because really sick patients received insufficient help with hydration,” says Dr Gilles van Cutsem, COVID-19 medical activities manager and TB/HIV adviser with the Southern Africa Medical Unit.

To illustrate how the doing of small things can prevent unnecessary deaths during the pandemic, Masunda gives the example of bedpan support.

“A patient who does not have easy access to a bedpan might get up in the night and go to the bathroom unnoticed, and then collapse and die of hypoxia because they have gone off oxygen,” she says.

Another commonly overlooked practice in MSF’s experience is proning, a physiotherapy technique for optimizing oxygenation.

“Proning is a simple procedure that can increase a patient’s oxygen saturation by up to ten percent, but some patients, especially the larger-bodied, find the position uncomfortable unless well supported by pillows, which are too often in short supply in facilities,” Masunda says.

COVID-19 treatment wards and COVID-19 suspect wards are also acute internal medicine wards, where there are a range of comorbidities to be managed.

Dr Manny Thandrayen has worked in senior management positions in several public KwaZulu-Natal hospitals, including Ngwelezana, and joined the MSF KZN team in January 2021 as medical coordinator. “Often in the hurly burly of an emergency situation comorbidities are missed, or the rapidly deployed staff do not have the right experience, and rectifying this situation requires expert attention and lots and lots of training, which MSF was well placed to provide,” he says.

In Mitchells Plain Hospital of Hope in the Western Cape, where several MSF staff worked in January 2021, half the patients were diabetic, which South African data has shown is the single biggest risk factor for mortality.

“In all places where staff were trained, it was particularly important to ensure there was extensive bedside training on the basics of managing diabetes, which is to ensure that glucose levels are checked at the correct times pre-meal, and that insulin is given at the correct times,” says Dr Rosie Burton, an infectious diseases physician at MSF’s Southern Africa Medical Unit. Burton adds that with high rates of diabetes, glucometers are often in short supply in COVID-19 wards.

MSF staff also noticed that routine HIV testing on admission fell apart in places during the second wave of COVID-19.

“We know there is high incidence of other comorbidities in most of South Africa, but during the COVID waves the possibility that a patient might have undiagnosed HIV or TB, or other opportunistic infections, often wasn't considered until we were doing bedside clinical training. There needs to be routine HIV testing on admission. HIV positive patients need CD4 counts, viral loads, TB investigation and empiric treatment of other opportunistic infections such as pneumocystis and cryptococcal meningitis,” Burton says.

The importance of oxygen supply

The first COVID-19 wave showed South Africa that several public hospitals lacked adequate oxygen supply, a situation that many facilities then remedied by installing liquid oxygen tanks, making piped oxygen available in COVID-19 wards. This avoided the limitations of using expensive portable oxygen cylinders that deplete quickly and must be constantly monitored, and energy intensive oxygen concentrators. However, oxygen cylinders and concentrators remain important in places lacking liquid oxygen, and as a back-up supply in hospitals with piped oxygen.

In the field hospitals and COVID-19 wards where MSF teams primarily worked, the installation of piped oxygen by the department of health made it possible to deliver High Flow Nasal Oxygen (HFNO), a type of respiratory support method that delivers a high flow of medical gas to a patient. During the first wave, HFNO was used in several hospitals, demonstrating its feasibility in a ward context.

“There is a perception that mechanical ventilators in ICU settings are the key to saving lives in patients with COVID-19, but in fact most lives are saved by ensuring the basics are done well, with basic oxygen delivery and proning,” says Burton.

In facilities where MSF worked in the second wave steps have already been taken to improve the future COVID-19 response, such as in Ngwelezana, where hospital management approved a significant increase in the number of high flow nasal oxygen beds. Other contexts appear frozen, however, and in these places a surge in COVID-19 cases in the coming weeks would likely again be characterized by high mortality, including many deaths that could have been avoided. A third wave is coming, and South Africa needs to prepare

MSF projects in South Africa have also been supporting their local health systems to cope with the pressures and impacts of COVID-19, undertaking health promotion, infection prevention and control as well as screening and testing activities in communities and healthcare facilities. Existing activities were kept running in adapted forms in order to mitigate the collateral damage of COVID-19 on health services, and community shielding programs have been developed in Khayelitsha and Eshowe with the objective of reducing the risk of COVID-19 infection among vulnerable groups.