Sarah Goddard works for MSF in South Sudan, helping to diagnose sick children. She wishes she had better diagnostic tests, so that she could get kids on the right treatment faster.

Fever is a common symptom for many diseases that infect the children who are brought to our projects. Sometimes it’s hard to establish the exact underlying cause of disease in a child.

There are sophisticated tests that could identify infections precisely, but often they can’t be used in the places we work.

➜ LEARN: about MSF’s proposals to the WHO for new fever diagnostic tests

Animesh is a TB doctor working for MSF in Belarus. He wishes that more of his patients could access the new, more effective TB drugs that have been developed.

He wishes he wouldn’t have to see any more patients go permanently deaf as a side-effect of old and toxic drugs, or go through two years of difficult treatment only to be told they are not cured.

Our staff treat many patients with drug-resistant forms of tuberculosis. The treatment is very tough to go through, and can’t guarantee a cure.

There are new drugs for TB that are both more effective and less toxic, but only a fraction of those who could benefit from them can get hold of them — high prices and lack of registration are major barriers to access.

OUR WORK
➜ READ: how MSF has used the two new TB drugs and the results of the new regimens
➜ LETTER: We wrote a letter to Johnson & Johnson expressing concerns with lack of availability & affordability of bedaquiline worldwide
➜ CALL TO BRICS: we urged BRICS countries to take action to halt the TB epidemic

Paul Beko works for MSF treating sleeping sickness in one of our mobile medical teams that visits the Democratic Republic of Congo.

He wishes he had a treatment to offer that was shorter and available in pill form (instead of by infusion) so that more people’s lives could be saved.

The patients who come to us and are diagnosed with sleeping sickness need to be treated with multiple slow infusions over a 10 day period.

This requires patients to stay under our care during that period, which is disruptive to their lives and livelihoods. Creating the conditions where this kind of complex treatment can be administered is very challenging for us given the places where we work, and patients can slip through the net.

We wish for a shorter, pill-based treatment to make it easier to cure more people with sleeping sickness.

4. AN IMPROVED, EFFECTIVE VACCINE AGAINST ALL STRAINS OF EBOLA AND OTHER RELATED VIRUSES

Jackson Naimah worked with MSF during the 2015 Ebola crisis in West Africa. He wishes he and his colleagues had had the medicines to treat Ebola two years ago.

And he wishes an effective vaccine was available to stop it ever happening again. Recently, promising trial results were published for a new vaccine to protect against the Ebola strain that caused the West African outbreak. But we still need a vaccine that could prevent epidemics caused by other variants of the virus.

Our staff felt helpless in 2014 when the Ebola crisis broke out in West Africa.

We did what we could to ease people’s suffering and contain the spread of the disease, but without effective medicines, tests or vaccines to treat, diagnose or prevent the disease, we faced an impossible task. The disease outbreak went on to kill more than 11,000 people. Recently, promising trial results were published for a new vaccine to protect against the Ebola strain that caused the West African outbreak.

But we still need a vaccine that could prevent epidemics caused by other variants of the virus. We wish for a vaccine that will protect against all strains of the Ebola virus and other related viruses.

5. US$5 PER CHILD PNEUMONIA VACCINE FOR KIDS IN ALL DEVELOPING COUNTRIES

Dr Anas is a paediatrician working for MSF in Jordan, near the Syrian border.

He wishes that his government could afford to vaccinate children throughout the country against pneumonia. He wishes he didn’t have to see any more children die from this preventable disease.

In refugee camps, in cities, in remote rural areas, children are dying of pneumonia. Every year, a million children die of the disease.

We are able to protect children from this disease with a simple vaccine. So why is it that around sixty countries still cannot afford the vaccine to protect their children?

We wish the pneumonia vaccine was available for $5 per child (for all three doses) in all developing countries.

OUR WORK
➜ LEARN: about our campaign to reduce the price of the pneumonia vaccine 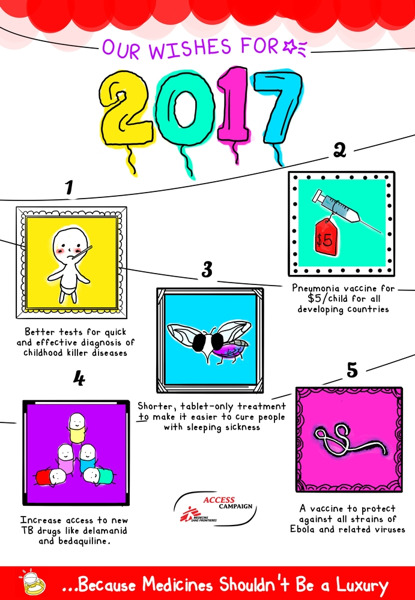