Tuesday, September 11, 2018 — More than a hundred people have reportedly died after a shipwreck off the Libyan coast one week ago, survivors told Doctors Without Borders (MSF) teams working in Libya. A group of 276[1] people, among them survivors of the shipwreck, were brought from the sea to the port city of Khoms (120 km east of Tripoli) by the Libyan coast guard on Sunday 2 September. MSF has been providing urgent medical assistance following disembarkation.

MSF has treated survivors with chemical burns from the engine petrol spills, “Our medical team worked solidly for several hours to assist survivors with the most serious conditions, says Jai Defranciscis, an MSF nurse working in Misrata, northwest Libya. “We managed to treat 18 urgent cases – among them were nine people suffering from extensive chemical burns (up to 75 percent of the body). We organised a referral to the hospital for a patient in particularly critical condition: without quick access to specialised intensive care, the person would have died.”

Upon disembarkation, the group was transferred to a detention centre under the control of the Libyan authorities. It is common for people returned to Libya from unseaworthy boats to be sent back into a harmful system of arbitrary detention. Between January to August 2018, the EU-supported Libyan Coast Guard already returned 13, 185 refugees and migrants to Libya[1].

As part of its activities in detention centres in and around Khoms, our teams have provided further medical and follow-up care to the group while they remain in detention. Among the group are pregnant women, children and babies, and people with serious medical conditions and chemical burns. MSF teams have also organised six additional referrals to hospital.

Sick and traumatised people left with no alternative than arbitrary detention

“We are extremely worried for our patients. How can they recover when locked inside cells, in very poor hygiene conditions, and sleeping on blankets or mattresses placed on the floor that cause incredible pain for those suffering from severe burns? Some of them cannot even sit or walk.” says Defranciscis.

“We have started to see patients with severe chest infections like pneumonia, caused by being in the water for such a long time.” Inadequate access to clean drinking water and food is likely to delay or prevent people’s recovery and might instead exacerbate their medical conditions.

Many of the survivors are mourning the loss of their relatives. On top of the dangers faced during the journey through Libya, they have experienced another very traumatic situation at sea. Instead of receiving the support they need, refugees and migrants are arrested and detained in deplorable living conditions, without basic safeguard, legal recourse or alternative.

Among those detained, MSF has met asylum seekers and refugees who have been registered or recognised by UNHCR in Libya or another country. Their prospects appear particularly bleak: UNHCR- led mechanisms to evacuate them from Libya to Niger and resettle them in a third country, launched in 2017 in the aftermath of the global outrage sparked by CNN footage, have remained at a standstill for several months. Instead, asylum seekers and refugees face indefinite arbitrary detention and are at risk of being trafficked, as criminal networks are often the only option left for people to continue their journey in search of safety.

Some people also told our teams that they had decided to leave Tripoli to escape the violent clashes and shelling that began on 26 August in the capital.

MSF reiterates its call to end the arbitrary detention of thousands of refugees and migrants across Libya and scale ways to evacuate them to safety out of the country. Specifically, MSF urges:

- UN Refugee Agency (UNHCR) and safe countries to rapidly organise the evacuation of refugees and asylum-seekers from Libya and expedite their resettlement.

- UN Migration Agency (IOM) and countries of origin to expedite the evacuation and repatriation of migrants in Libya who wish to return to their home countries.

- European States and Libyan authorities to stop intercepting people who flee by sea and returning them to Libya as a mean to prevent arrivals to Europe. 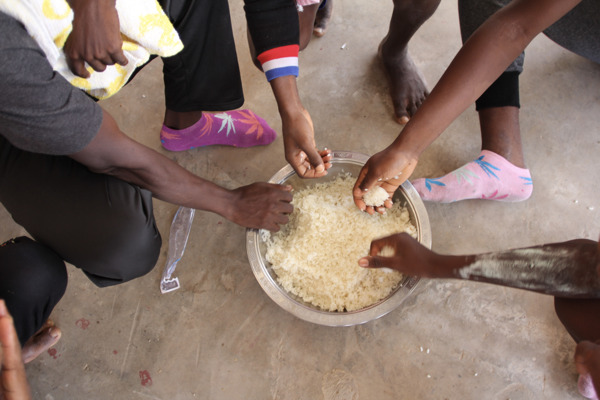