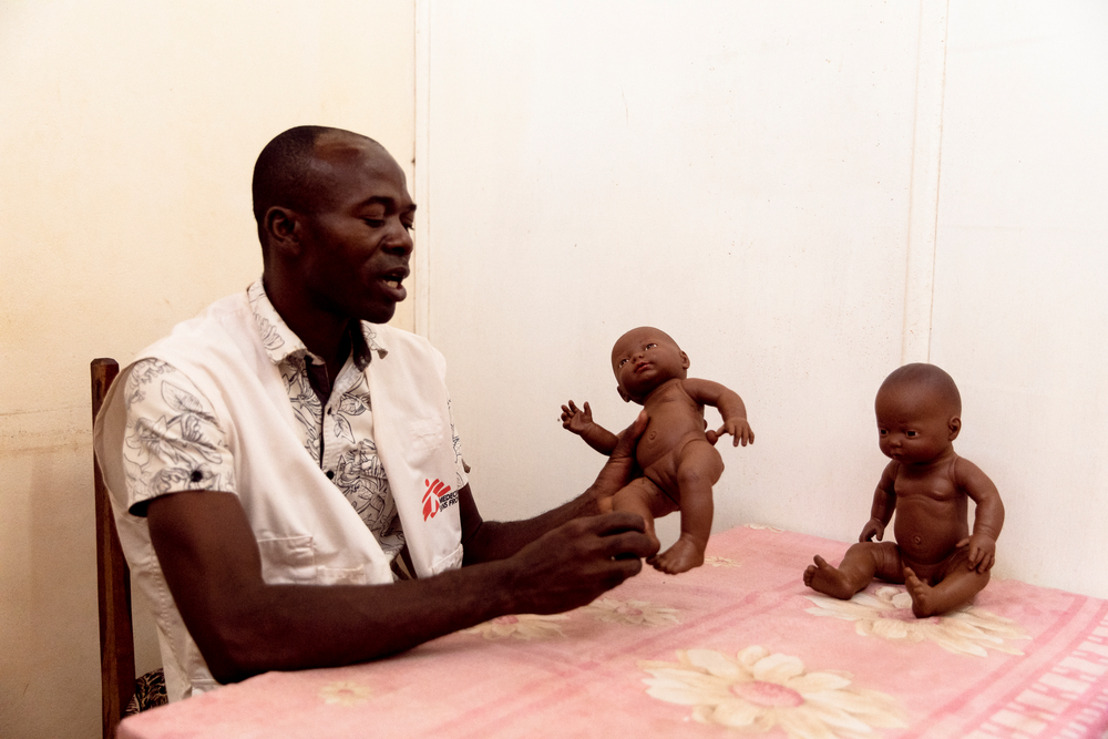 “After the assault, I thought I would take my own life,” says Charlotte*, an 18-year-old survivor of sexual violence from CAR’s capital, Bangui.

With her mother having died, and her father having rejected her, Charlotte was living with her aunt and her uncle when her uncle raped her one day at home, while the rest of the family was out. Her aunt did not believe her and Charlotte felt completely alone and desperate. She first went to the police without success and, after talking to a cousin whom she considers like a sister, she decided to seek help.

Charlotte was very fragile, both physically and mentally, when she arrived at the Tongolo support centre, run by the teams of Médecins Sans Frontières/Doctors Without Borders (MSF). Tongolo means ‘star’ in Sango, the local language, and refers to ‘hope’, as the star shines among the dark sky. Charlotte is one of the more than 6,000 survivors of sexual violence who have received medical, psychological and psychosocial care by MSF teams since the Tongolo project kicked off in Bangui in 2017.

Célestin*, another survivor from Bangui, also felt trapped and did not expect such a traumatic event would happen to him. He innocently offered shelter to a person he thought he knew, until he got sexually harassed one night.

“I was sleeping, and he came out of nowhere with bad intentions,” says Célestin. “He was drunk and forced me to do things I did not want to. I started to panic, I was so scared. He beat me but I managed to escape.”

Initially hosted across two different structures in Bangui, Bédé-Combattant and the Hôpital Communautaire, MSF opened the Tongolo centre in August 2020 near the Parc du Cinquantenaire in Lakouanga neighborhood. The new centre complements the others and is entirely dedicated to survivors of sexual violence.

Females and minors, the main groups affected by sexual violence

Most of the survivors come from Bangui itself, a city where 890,000 of the 4.5 million Central Africans live; however one in four of the patients are from the capital’s outskirts, and a tiny fraction, which is increasing, are from more remote areas in other provinces of the country.

“The Tongolo initiative strives to provide a high quality and free programme of complete care accessible for everyone,” explains Bilge Öztürk, the project coordinator. She adds that the services are adapted for males, children and adolescents.

While the majority of the patients are women and girls (over 1,900 in 2020, or nearly 95 per cent of the total), 111 men also sought care under this programme last year. 52 per cent of all survivors were minors, a figure labelled as alarming by Axelle Franchomme, Tongolo’s medical adviser, who believes the data compiled at Tongolo is representative of the sexual violence problem that can be found in other parts of the country.

Minors are the most vulnerable and the most sensitive ones to care for, as they are building their identity day by day, based on the situations they experience. If not taken seriously, such violent events can have a long-lasting impact on their future and leave a trace for the rest of their lives.

With CAR ravaged by years of civil war — the conflict has intensified since December — and its people repeatedly exposed to forceful displacement, high levels of violence and human rights abuses, sexual violence has also become a public health issue.

Years ago, survivors identified armed men as their aggressors in most of the cases. Today, with the programme open to larger sections of society, our experience shows that perpetrators are very often well known to their victims and are part of their close circle, be they friends, neighbours or even relatives. In 2020, 56 per cent of the patients seen by MSF staff declared they knew their perpetrators. With the resumption of violence in December 2020, this trend has been reversed and armed actors are once again the most frequent aggressors.

The aftermath of the assault does not come without fewer challenges.

This is also translated into the way patients communicate. Some of the Central African languages do not use the word ‘rape’ because it is considered as taboo and shameful.

“The survivor deserves respect and psychological support from the family, but this is often not the case,” adds Aimé-Césaire.

The invisible consequences of a sexual violence experience range from post-traumatic stress disorder and anxiety to depression. Some also have ideas of suicide and even attempt it. As the subject remains a taboo, survivors are forbidden in most cases from talking about the sexual assault they went through, due to the shame it could bring on the family.

The problem is then resolved amicably within the community or between family members, forgetting that this is a medical emergency that must be taken care of.

For male survivors, the situation is even more complicated. Many are too scared to speak up and only a few dares to come to the Tongolo facilities. They are reluctant to ask for help, as there is significant community pressure and stigmatisation.

In this complex environment, access to psychosocial support is essential to prevent or reduce the amount of psychological illness and suffering caused by sexual violence. Survivors presenting symptoms should be admitted for care and linked to a psychologist or psychiatrist without delay.

Since the health and mental health needs of survivors cannot be adequately addressed without considering their social world, survivors are connected to a social worker as well.

“The objective is to accompany survivors in their healing journey, to help them solve their problems and become strong enough to resume their lives,” says Franchomme, the medical adviser.

Following rape, treatment that prevents HIV and other sexually transmitted infections, as well as vaccinations against hepatitis B and tetanus, must be carried out as soon as possible, within three days of the event. However, in 2020, only 26 per cent of the patients seen by MSF arrived within 72 hours of the sexual assault. Community health workers and radio spots are a way to raise awareness of this need among communities.

“We hear on the radio that we should go to the Tongolo centre as soon as possible so that they can solve our problems,” says Célestin.

“Victims are already traumatised when they come to us, so mitigating other health-related issues is very important,” adds Franchomme.

Once this package of medication is given to patients, follow-up visits to check the treatment adherence are then organised to prevent possible side effects or complications. Female patients can also receive emergency contraception to prevent unwanted pregnancy and family planning options are offered to everyone in all Tongolo facilities to mitigate stigmatisation linked to a child born out of rape.

While seeking help as early as possible, and sharing the traumatic experience with mental health specialists, are vital to heal both visible and invisible wounds of sexual violence, rebuilding the future after the aggression can be as well a daunting task due to arising legal and socioeconomic needs.

There are currently very few services available in this field in the country, leaving many of the survivors in a blind spot, and there is a problem of impunity linked to sexual violence, with criminal procedures only happening in the capital.

In the Tongolo centre, a space to host local and international organisations specialised in legal, protection, education and socioeconomic support was created months ago so that survivors can access all services in one place as part of a systematic reference circuit. The coordination and collaboration between different groups should be reinforced throughout the year.

Other challenges are the temporary curfew and restrictions on movement imposed by the government during this period of political turmoil. For instance, several survivors used to come to the Hôpital Communautaire at night to avoid stigmatisation, but since January 2021, and for the coming months, this is not an option.

There is still a long way to go to identify, treat and adequately assist all survivors of sexual violence in CAR.

MSF is present in CAR since 1997 through 13 projects in Bangui, Bria, Bangassou, Bambari, Kabo, Batangafo, Paoua, Bossangoa and Carnot. The sexual violence component has been integrated in all projects and the Tongolo team, jointly with the emergency mobile team Eureca, is also intervening in other places across the country touched by increased violence, including sexual violence, the latest one being Liton late January 2020.