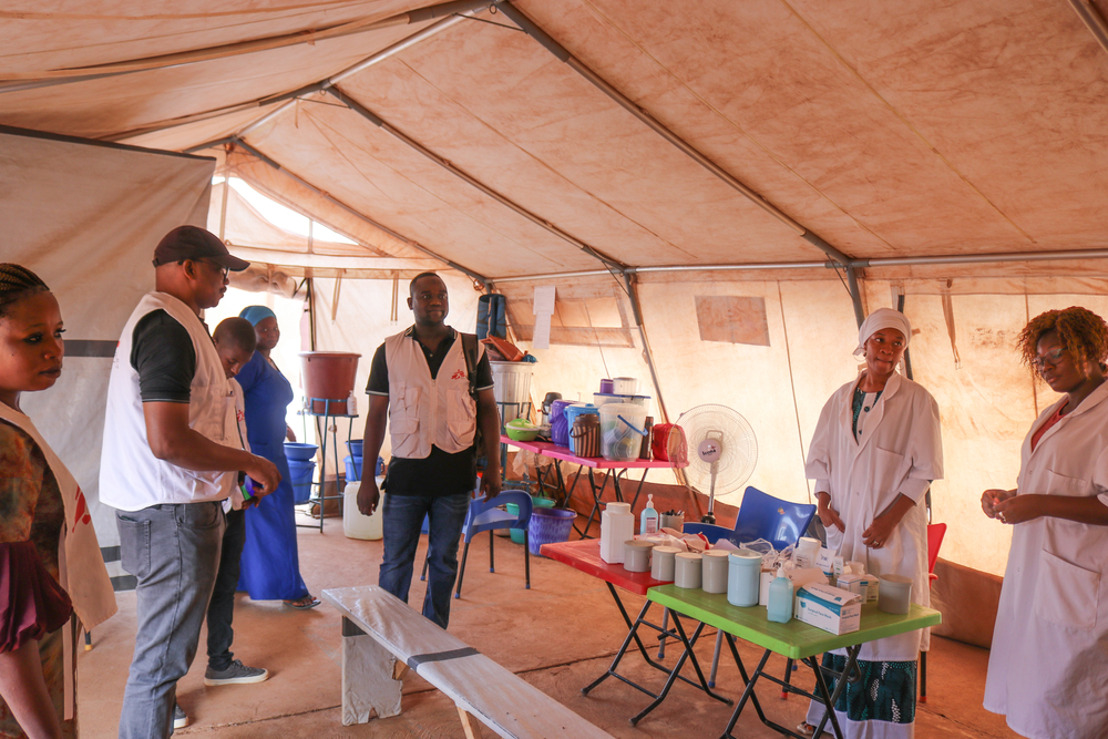 Since 2015, people in Burkina Faso have been living through a security crisis that has caused widespread displacement and untold distress. An estimated 1.9 million people have been forced to leave their homes, while more than 500 health facilities have closed or are operating at minimal capacity. The humanitarian situation is becoming more worrying every week but is widely ignored internationally. As is often the case, the lack of media attention goes hand in hand with a lack of aid funding. ​

"My wife was pregnant,” says Ousseini. “I had to take her to Kongoussi by motorcycle to a health centre. In Silgadji we had no access to healthcare because the health centres were closed. The first people to leave when the conflict broke out were the nurses and the health centres that remained open were very far away." Ousseini and his wife were displaced from their home in Silgadji, in the Sahel region of Burkina Faso, and are now living in Kongoussi, 80 km away.

In a context of increasing insecurity, the experience of Ousseini and his wife are similar to that of thousands of people who have fled violence in Burkina Faso. Displacement on a massive scale has dramatically increased people’s humanitarian needs and many communities – both displaced people and the host communities – are lacking many essentials, including healthcare.

Living in fear on a day-to-day basis, people often face difficulties even as they flee their homes. Many roads are unsafe, and people face the risk of being attacked while travelling. In several regions of the country, teams from international medical organisation Doctors Without Borders (MSF) have set up mobile clinics on the roads, as well as establishing advanced health posts in towns and villages, to provide people with free healthcare. “We are also carrying out community-based activities to be as close as possible to the people, especially those living on the outskirts of towns or in rural areas far from the cities," says MSF medical coordinator Dr Michel Madika. ​

Despite their efforts, it can be hard for medical and humanitarian organisations to reach the people who need help, as travel can also be dangerous for aid workers. In Djibo, a landlocked town in the Sahel desert region, MSF has had to suspend travel by its teams beyond the town itself for several months. The road between the capital, Ouagadougou, and Djibo is no longer safe due to checkpoints manned by armed groups, ambushes and improvised explosive devices planted on the roadside.

Unfortunately, this is the case in many of the places where MSF works in Burkina Faso. Even aid flights connecting towns and cities across the country are often suspended for weeks at a time due to insecurity. ​

The violence is having a negative impact on people’s access to basic social services. People fleeing their homes often arrive with nothing. For them, every consultation in a health centre brings the worry of how they will pay for it. ​

"Since I've been in Djibo, the cost of prescriptions is high and, as a displaced person, it's difficult to pay," says Belco, who left Baraboulé for the relative safety of Djibo. ​

As Dr Madika points out, such alternatives are not safe, which is why it is essential that medical care is available free of charge. "We need other organisations to step up too and contribute to free healthcare, not only for children under five and pregnant women, but for all the people in the areas most affected by the conflict, because the needs are enormous,” he says. “But how can free healthcare be guaranteed when Burkina Faso has so far only received 15 per cent of the funding planned for 2022 in the humanitarian response plan?”

MSF first responded in Burkina Faso in 1995 as part of the emergency humanitarian response to a large influx of refugees in the Sahel region. Since 2018, MSF teams have worked continuously in the country, providing medical assistance, distributing essential relief items, providing clean drinking water and training health staff. MSF teams in Burkina Faso currently work in the regions of Boucle du Mouhoun, East, Centre-North and Sahel.

Some key figures of MSF in Burkina Faso since the beginning of 2022: