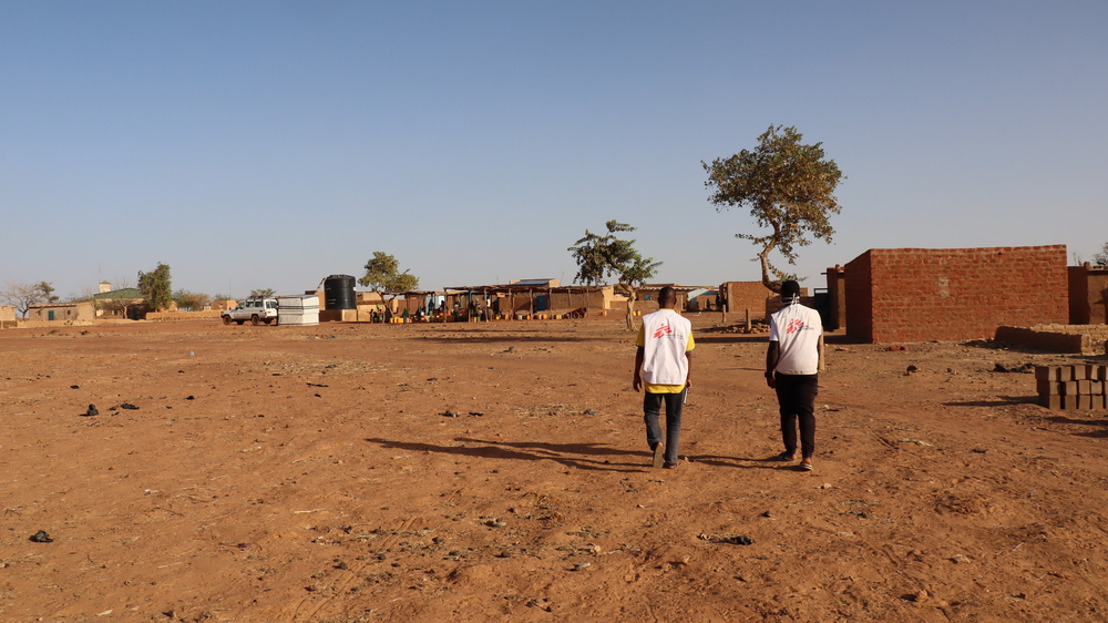 Wednesday, May 5, 2021 — “We have nothing left, since we fled the conflict. We don’t even have money to pay for treatment,” says Zallé Ramata, a displaced woman living in the village of Sirfou. On this day, Zallè brought two of her children to receive free medical assistance from Doctors Without Borders (MSF), whose teams have been regularly visiting this village since January 2021. “They weren’t feeling well. They spent last night throwing up until the morning,” she says.

These “mobile clinics” have been deployed as a complement to MSF’s medical services in the town of Titao, to provide free healthcare in an area where thousands of displaced people have settled, fleeing a cycle of violence that for years has pitted armed groups against the military, as well as intercommunal clashes.

Out of 23 health centres in the district of Titao, 15 are not operating at full capacity and another three are shut down due to the conflict. This adds to the difficulty in movement due to long distances, the insecurity and the lack of means of transportation, making access to basic health services in Titao’s district almost impossible. MSF mobile teams regularly visit Sirfou and the neighbouring villages of Todiame, Rounga and Ouindigui.

“Our main objective is to provide healthcare services to both displaced people and host communities that have no access to them and already suffered a lot because of the widespread violence.” Every week, an MSF team of five travels several dozen kilometres to reach these villages, often on very poor roads. The journey is relatively easier in the dry season, but becomes longer and more difficult when the rain start falling. The region’s chronic insecurity adds to the difficulties in the movements; it took months for the conditions to allow MSF teams to leave the town of Titao and reach these villages in the outskirts.

“We provide primary healthcare services that include treatment for common diseases such as malaria, diarrhoea and respiratory infections. Recently, we started providing treatment for chronic diseases and mental health support,” says Diarra. Between January and March 2021, MSF provided more than 1,600 medical consultations to host and displaced communities in an area where around 15,000 people live.

By the end of 2020, many displaced people that had settled in Titao decided to come back to their area of origin but the local health centres are still closed.

With the rain and the peak of malaria season approaching, MSF teams are concerned about the likely increase in people’s needs in a remote area with few services available. The risk of malaria is higher because mosquitoes reproduce in stagnant water.

“Our medical work base in Titao is a short-term solution we launched this year to respond to the needs of people who were recently displaced,” says Dr Diallo Alpha Amadou, MSF’s medical coordinator in Burkina Faso. MSF’s teams also support five health facilities in the district of Titao to help them regain their full working capacity, as a more long-term solution. “When these health centres are ready to admit patients again, we will move our mobile clinics towards other villages,” says Dr Alpha. MSF medical teams also support local health authorities with mass vaccination campaigns against common diseases among the displaced population.

MSF’s logistics teams rehabilitate old boreholes or build new ones  to increase access to clean water. With the waves of displacements, poor living conditions for displaced people and the lack of clean water, diseases can easily spread.

“We receive many patients suffering from diseases they caught by drinking polluted or dirty water. In many areas in the North region, just like in other areas of the country where displaced people settled, access to clean water remains a challenge for thousands. The lack of water access points and their bad quality are reasons behind different parasitic infections and other water-borne diseases such as cholera and diarrhoea,” says Dr Alpha.