Monday, July 10, 2017 — Hundreds of thousands of people have been displaced by the conflict between Boko Haram and the Nigerian armed forces in the northeast of the country. Some of them have already lived for years in their temporary homes. Others are on the move from one place to another. All of them recount a life full of hardships in search of a glimmer of hope. These are some of their stories in the towns of Pulka and Banisheikh, Borno state.

“By the time we left, we had suffered a lot. We were very scared. It took us two days to reach here by foot. We slept overnight in the bush. Some of the people we travelled with passed away on the journey. Some of our children died of thirst as we didn’t have any water.” Falmata is a 35-year-old woman from Shetimari, in the northeastern Nigerian state of Borno. She recalls with a sigh the beginning of the trip that took her away from her village. That was already four years ago, in the midst of a conflict between the Nigerian armed forces and Boko Haram, which today has left nearly two million people displaced across the country and several hundred thousand refugees settled in neighbouring countries around the Lake Chad region, such as Niger, Cameroon and Chad.

Falmata is one of those people who have lost almost everything but still hopes for a better future. The journey brought her to the town of Banisheikh, about an hour and a half by car to the west of the state’s capital, Maiduguri. “We settled here because we thought it was a safer place.” A lot of people were killed in her village, including three of her relatives. Boko Haram members would come on motorbikes and rob their belongings, she recalls. Some women were subjected to forced marriages, other girls disappeared. “We don’t think it is safe enough to go back there yet.”

Far from the crops she used to grow, Falmata has been moving from one camp to another in Banisheikh with her husband and seven children. The displaced community has grown bigger over time and most of them now live in five settlements, sheltered only by flimsy plastic sheeting, sometimes supported with pieces of wood and stalk. These tiny spaces, in which they cook, sleep and spend most of their time, become terribly hot in the high temperatures of Borno’s summer. When it rains, the plastic shelter leaks. Strong winds can also rip holes in the plastic sheeting. Sometimes the timber becomes infested with termites, damaging the frames, and causing the shelter to collapse. “There is not much to do here. There are people from different areas. Almost all of us have been displaced for a very long time already. The situation is better than before though, when we couldn’t even sleep well because of the lack of security.”

Unlike many roads across Borno, where movements can only be made with military escorts, traffic along the road from Banisheikh to Maiduguri has long been re-established, but numerous checkpoints are a reminder of the volatility of a place that is a recurrent crossing point for insurgents coming from the Sambisa forest in the southern part of Borno state, heading north to Niger.

Over the past few months, following the intensification of the offensive, the Nigerian army has taken control of some towns in Borno. The clashes between the army and Boko Haram are creating new waves of movement among the people in all directions on a constant basis. People often have no choice but to leave their villages in the rural areas, sometimes separating from their relatives, and move to the bigger towns where some humanitarian agencies are concentrated. Aid is not reaching some inaccessible areas, and little information is emerging from these. One of the towns that has become a recurrent destination is Pulka, close to the border with Cameroon. With about 60,000 to 70,000 inhabitants at present, Pulka has seen its population increase considerably since the beginning of the year, with daily or weekly new arrivals of people, to such an extent that humanitarian organisations now fear that the place is not fit to host many more people, particularly due to shortages of drinking water and insufficient shelter.

“When people arrive, they have very few belongings. The vast majority are women and children up to 15 years of age, as well as some elderly people,” says Sabina Mutindi, medical programme manager of Doctors Without Borders (MSF) in Pulka. “The young generation of men is completely missing,” adds Mutindi. Some of them may have died in the conflict, others may have joined the ranks of Boko Haram. “We see every possible medical case. The patients are hypoglycaemic, exposed to a harsh environment, so they have respiratory tract infections, ulcers, high blood pressure”. Once in Pulka, the fight is for survival.

“Before the conflict, I had a good life, but now I don’t know whether tomorrow there might be another bomb blast. I am just surviving. I can’t work, I can’t move… all I can do is sleep.” Musa, a 75-year-old man from the Nigerian town of Kirawa, speaks with grief after having lost most of his food stocks, money and belongings due to the violence. Five months ago, the military brought him and his family from there to Pulka. This was, as he says, the “only available option”. “But what kind of life is this?” complains Musa as he points to a plastic sheet on the ground where he sleeps.

Despite all the hurdles, for others, going to Pulka is a big relief. Some had left the town when Boko Haram took over and have been out of Nigeria, in Cameroon, for the last few years. Since May, the return of Nigerian refugees from Cameroon to Nigeria has intensified, with people relating their departure to the deterioration of the conditions in the camps where they were seeking refuge. However, they are also heading to places where services are limited as well. “We were told that we would be brought back to Nigeria, so we decided to come on our own. I decided to come to Pulka because it is my hometown,” says Adama, a 25-year-old woman and mother of four children, who had been living in Minawao camp in Cameroon for the last two years until early May.

However, the return to Nigeria was not free of problems. During the journey, she had to cross a river and some people travelling with her died when the canoe they were using capsized. “In Minawao, life was not easy. We used to sleep in an open space. Food was not always available, you’d be lucky to have something to eat every day. The information we received was that things in Pulka were better.” Upon her arrival, Adama found out that the food reservoirs and cattle stock she had left in the house she was renting in Pulka had disappeared, as well as all her other belongings. As a result, she moved into a health centre compound where MSF is running a hospital, and which is currently hosting around 2,000 displaced people and returnees who have not been given tents. “People need to assist us with aid,” says Adama.

MSF has been working in Maiduguri in Borno state since August 2014. The organisation is currently managing 11 medical facilities in six towns in Borno (Maiduguri, Ngala, Monguno, Gwoza, Pulka and Banisheikh) and regularly visits another five towns: Bama, Banki, Dikwa, Damasak and Rann. 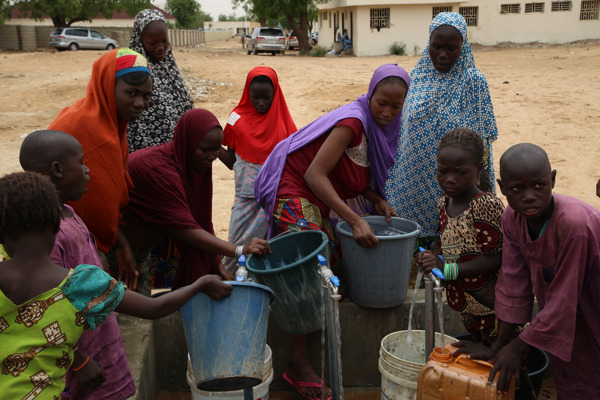