Thursday, August 24, 2017 — Hopes for improved access to an affordable pneumococcal conjugate vaccine (PCV) that safeguards both children and adults from pneumonia was dealt a major blow after the Indian patent office granted a patent to the US pharmaceutical corporation Pfizer for its PCV13 product, marketed as Prevnar13.

The granting of this patent would block other manufacturers in India from supplying this vaccine - which protects against 13 types of pneumococcal bacteria (PCV-13) - to those who need it most. India’s generic medicines industry and strict patent law framework is pro-public health and has positioned the country as the “pharmacy of the developing world”.

Indian vaccine manufacturers have already announced that they can supply PCV for a much lower price but they and others around the world will have to find new routes to develop a non-infringing PCV vaccine which may delay the availability of competing products in the pipeline.

Currently, South Africa spends more than 50% of its vaccination budget on purchasing PCV13 alone – this is set to continue for the almost another decade.

Why? Because, historically, Pfizer and GSK have maintained the patent monopoly which allows them to charge high prices while eliminating the possibility for affordable competitors locally and internationally. India’s decision this week means that the chances of South Africa and other developing countries importing an affordable generic from India are significantly decreased for at least nine more years, until 2026.

“It’s unfair and unacceptable that almost a million children die each year from pneumonia, even though a life-saving vaccine is available. Children everywhere have a right to be protected from pneumonia, but many governments can’t afford the prices set by Pfizer,” said Dr Prince Mathew, Asia Regional Coordinator for MSF. “We urgently need additional manufacturers to rapidly introduce competition with the aim of lowering vaccine prices.”

The Indian patent office’s decision also has broader implications: it indicates a weakening of India’s strict patentability standards, which results in granting monopolies for minor and trivial improvements of existing medical products, as allowed in some other countries. Such patent “evergreening” practices will hamper India’s role in supplying developing world governments and humanitarian organisations like MSF with affordable medicines and vaccines.

Again, this is bad news for South Africa as most of the medicines the Department of Health uses are affordable generic medicines from India.

“Given all these factors, this is why it’s even more important that South Africa continues on the path to more progressive patent laws. Currently, South Africa doesn’t have opposition procedures like India so this patent can’t even be challenged here,” explains Claire Waterhouse, Access Campaign Advocacy Adviser for MSF Southern Africa.

“We need better patent laws in order to ensure that these kinds of situations can no longer arise in South Africa. India has set a strong example but with this shocking decision, maybe it is time that South Africa steps up and becomes a global role model for prioritising public health over big pharma profits in India’s stead.”

Each year, MSF teams vaccinate millions of people, both as outbreak response to diseases such as measles, meningitis, yellow fever and cholera, as well as routine immunisation activities in projects where it provides health care to mothers and children. In 2015 alone, MSF delivered about 5.3 million doses of vaccines and immunological products in more than 30 countries. It has purchased PCV in the past for use in its emergency operations and is scaling up its use of PCV and other vaccines with a particular focus on improving routine immunisation, as well as extending the package of vaccines used in humanitarian emergencies. MSF has vaccinated children caught in emergencies with PCV in Central African Republic, Ethiopia, South Sudan, Syria and Uganda, among others.

In 2015, MSF launched its ‘A FAIR SHOT’ campaign to push for pharmaceutical companies Pfizer and GSK to reduce the price of the pneumonia vaccine to $5 per child for all three doses. Visit afairshot.org.

Back in 2016, MSF challenged Pfizer’s unmerited patent claims in India, after the same patent was revoked by the European Patent Office (EPO). The patent is also being legally challenged in South Korea and before the US Patent Trademark Appeal Board.

According to Leena Menghaney, South Asia Head for MSF’s Access Campaign, the method Pfizer is trying to patent is too obvious to deserve a patent under Indian law, and is just a way to guarantee an extended market monopoly for the corporation for many years to come.

The patent granted to Pfizer involves the method of conjugating (assembling) together serotypes of Streptococcus pneumonia into a single carrier and is essential for PCV developers. The patent is a mere addition of serotypes to the already established 7 valent vaccines and does not meet the inventive step requirement; it ought to have been rejected. In 2014, the revocation of Pfizer’s patent by the European Patent Office in 2014 judging it to be non-inventive was based on the consideration of a total of five oppositions, including those filed by Merck and Novartis. The revocation was on upheld on appeal.

Pharmaceutical corporations have been building so-called patent thickets restricting development and competition in the area of PCV. One study identified 106 PCV applications potentially relevant to the manufacturing of pneumococcal vaccines. GSK, first to manufacture PCV10 (Synflorix), and Pfizer (previously Wyeth), first to manufacture PCV13 (Prevnar13), have filed the most number of patents in India, China and Brazil, in an attempt to create impediments in the development of less expensive alternative pneumococcal conjugate vaccines by developing country vaccine manufacturers (DCVM).

Pneumonia is a leading killer of children, accounting for more than a quarter of deaths of children less than five years of age. The vaccine does more than protect those who are vaccinated from life-threatening infections. Studies show that the vaccine lowers antimicrobial resistance (AMR) by bringing down infection in the community and reducing antibiotic use in children. One study estimates that introduction of Hib conjugate and PCV13 to 75 developing world countries could reduce antibiotic use for these diseases by 47% and avert 11.4 million days of antibiotic use in children younger than <5 years old each year.

Pfizer and GlaxoSmithKline (GSK) control a duopoly market for the pneumococcal conjugate vaccine (PCV), the world’s best-selling vaccine that has brought in nearly US 40 billion dollars in sales between 2009 and quarter two of 2017 for these two pharmaceutical corporations. Pfizer’s PCV13 earnings from 2009 to Q2 2017 is USD 35.2 billion and GSK’s PCV10 earnings in the same period is USD 4.5 billion.

Meanwhile, many developing countries, where millions of children risk getting pneumonia, simply can’t afford the vaccine. More than 50 countries, including Indonesia, Jordan and Tunisia, have spoken out against exorbitant vaccine prices, while MSF has been campaigning for years for lower PCV prices that are affordable for all governments.

At the lowest global prices, which aren’t accessible to most countries, it is now 68 times more expensive to vaccinate a child than in 2001, according to a 2015 MSF report, The Right Shot: Bringing down Barriers to Affordable and Adapted Vaccines. The pneumonia vaccine accounts for almost half the price of the entire vaccination package for a child in the poorest countries.

The pneumonia vaccine is now being introduced into India’s Universal Immunization Program (UIP) with support from Gavi, the Vaccine Alliance. Yet, at more than USD 9 per child, or USD 3 per dose for each of the three doses needed for full vaccination, the price still remains too high, forcing the government to do limited rollouts of the PCV vaccine in just three states: Himachal Pradesh, Bihar and Uttar Pradesh. A lower priced PCV vaccine is critically important to increase vaccine coverage across the entire country in the coming years. 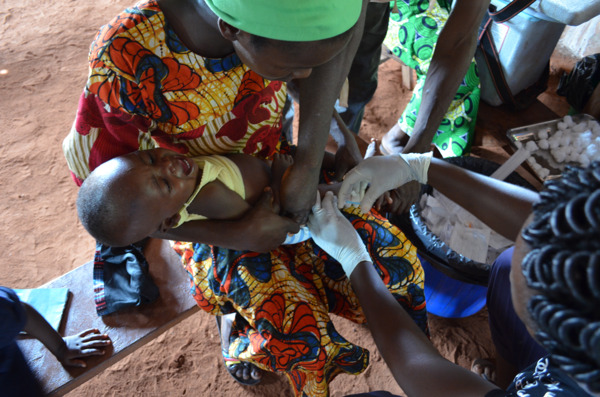