The world has made significant progress on four of the five main causes of maternal mortality. But unsafe abortion—the only fully preventable cause—has been largely neglected.

Unsafe abortion still accounts for at least one in 12 maternal deaths globally. And, compared to reductions in all the other direct causes of maternal deaths since 1990—severe bleeding, severe infection, blood pressure disorders and obstructed labour—there has been little improvement in the negative impact of unsafe abortion.

Unsafe abortion is a procedure for terminating an unwanted pregnancy either by persons lacking the necessary skills or in an environment lacking minimal medical standards or both, as defined by the World Health Organization. Abortion, whether safe or unsafe, is a common event worldwide: approximately one in four pregnancies ended in an induced abortion during the period 2010-2014.

About 45 per cent of abortions globally are deemed unsafe, and more than 22,000 women and girls die each year after undertaking an unsafe abortion, says the Guttmacher Institute’s comprehensive report published in 2018.

When a woman or girl is determined to end her pregnancy she will do so, regardless of the safety and legality of the procedure. Where safe abortion care is not available, she will risk her life with an unsafe abortion, often because continuing the pregnancy is unbearable.

About 97 per cent of unsafe abortions and related deaths occur in Africa, Latin America and southern and western Asia, all regions where Médecins Sans Frontières/Doctors Without Borders (MSF) offers medical assistance to people in need.

Meanwhile, the scale of post-abortion complications is enormous, with an estimated seven million women and girls admitted to hospital every year. Some will be permanently disabled, and some will never be able to carry a child again.  Yet we will never know the full extent, because there are many women and girls who dare not, or cannot, access care.

In 2017, MSF staff treated over 23,000 patients with post-abortion complications. In some hospitals where MSF teams work, up to 30 per cent of obstetric complications may be due to unsafe abortion.

The woman or girl may have consulted an unskilled provider, or attempted the abortion herself. The history of unsafe abortion is marked by dangerous methods such as: sharp sticks inserted up through the vagina and the cervix into the uterus; ingesting toxic substances such as bleach; inserting herbal preparations into the vagina; and inflicting trauma such as hitting the abdomen, or falling. Many are not even effective—but can leave lasting damage.

"In the operating theatre, examining many of these women, I found trauma marks on the cervix, caused by objects such as sticks"

For those that use these unsafe methods, the life-threatening consequences include excessive haemorrhage, sepsis (severe general infection), poisoning, uterine perforation or damage to other internal organs. Urgently admitted to hospital, a woman may need a blood transfusion, major reparative surgery, or a hysterectomy—complete, and irreversible, removal of the uterus.

Some women are able to access somewhat safer methods like medication on the black market, but may still suffer complications due to poor drug quality, incorrect dosing or inadequate information, or a combination of these.

In the worst-case scenario, the woman being treated may have been refused a safe abortion, only to reappear on deaths’ door due to an unsafe one. In Democratic Republic of Congo, where abortion used to be extremely restricted legally, emergency department doctor Jean-Paul remains shaken by his direct experience of just such a girl. Denied care in the MSF hospital he was working in, she returned in a coma, and died not long after.

A woman may hope to be pregnant one day in the future, but not necessarily right now.

MSF’s experience, in countries such as Colombia, Greece, Mozambique and South Africa, to name just a few, has confirmed the diversity of woman and girls facing an unwanted pregnancy: married and unmarried, women with children and girls that still go to school, urban women with education and those from rural villages.

Some have been using contraception that failed, or ran out due to interrupted supply. Some have been coerced into pregnancy; or become pregnant due to sexual violence.  Others have faced financial and emotional hardship, with and without partners or family support. Some have been caught up in a humanitarian crisis, and fled for their lives.

There can be as much shame and stigma attached to the circumstances that created the unwanted pregnancy as the contemplation of abortion itself. Like the young woman from Jean-Paul’s neighbourhood, this means many questions need to be faced alone. Who can I turn to? Where can I go for the help? What are my options? What will it cost? Will it be painful? What will happen to me? What if I can never have children again? What will this mean for me and my family if people find out?

Most women have already thought about their options and made the decision before seeking care.  Some women may ask for more information before deciding.  Our role is to listen and provide the appropriate level of support and information, respecting her decision without judging or influencing her.

Consultation with a trained professional also ensures that the woman understands the risks and benefits of an abortion, knows what she will experience during the process, and has the opportunity to ask questions.

The fact that abortion is still criminalised in most countries remains a concern. The evidence is clear that the number of abortions changes little when there are legal restrictions. Instead,  where abortion is most restricted, it is more likely to be unsafe. Where abortion is legal and safe services are available, deaths and disability from abortion are greatly reduced.

Prompted by the evidence, some countries have rethought their laws.

Legislation in Democratic Republic of Congo changed in April 2018. Since then, all medical facilities have the obligation to provide termination of pregnancy for women who have been victims of rape or sexual abuse, or whose physical or mental health is at risk.

Mozambique revised its stance four years earlier, in 2014, allowing for cost-free abortion for all women in the first trimester, and up to 24 weeks under special circumstances in approved facilities by qualified practitioners. Although a significant proportion of the population may remain opposed, as in Mozambique, when laws do ease they can lead to palpable change for women—like for Amanda. Now she could have access to an option that was truly safe.

Barriers in the healthcare system

Liberalisation and decriminalisation of abortion are therefore important steps, but do not guarantee the availability of safe abortion care. Many health systems respond slowly, and inconsistently, to change.

In Mozambique, clinical standards for safe abortion were only defined in 2017. Institutional opposition, resistance from health workers and decision-maker knowledge gaps have all hindered implementation, meaning there are still many women who don’t know how to access services.

In Colombia, significant decriminalisation was achieved 12 years ago. But in the port cities of Buenaventura and Tumaco, MSF found general ignorance about the current scope of safe abortion care.  Healthcare workers who should have been prepared to undertake this type of care were not even aware it was part of their duty.

For the woman or girl with an unwanted pregnancy, it can be hard to overcome sometimes strong provider resistance, which may even extend to denial of care.

“They say, ‘Come back in a few weeks.’ ‘Let's go to the psychology ward to see if you are really sure.’ “

The barriers can be bureaucratic. In Athens, where MSF supports migrants, asylum-seekers and refugees to access safe terminations in the public health system, women join a waiting list more than four weeks long just to have their first appointment. More appointments with more health professionals, especially doctors, follow. Some patients face additional obstacles, because they didn’t have their social security identification with them, or attended an appointment without a translator.

In Greece, the legal limit is 12 weeks’ gestation, so women face a race against the clock to be able to end their pregnancy because of the many hurdles in their way.

Termination of pregnancy is a safe and effective medical act, usually accomplished with tablets (‘medication abortion’) or a minor intervention under local anaesthesia (manual vacuum aspiration, or MVA). Both of these abortion methods are less risky than an injection of penicillin.

Medication abortion involves two drugs, mifepristone and misoprostol, and a total of only five pills. It is often the preferred method for women, as it is less invasive and can be started as an outpatient and completed in the privacy of one’s own home.

Doctors are not necessary to provide these services; midwives and nurses can provide both abortions in hospitals and health centres alike, as long as they have the skills.

Even so, in places where health services are stretched, providers can benefit greatly from additional support—further training, institutional back-up, mentoring and guidance. In Rustenburg, South Africa, this is an important component of nurse Kgaladi Mphahlele’s work as Choice of Termination of Pregnancy Manager on behalf of MSF. The district health service is committed to providing safe abortion care, but staff can be unsure of correct methods and protocol.

Some also need moral support in the face of judgement and stigma from colleagues in the workplace. Even knowing the importance of this care, other providers still often have to confront their own attitudes in providing this care, so peer support is important.

Safe abortion care is a package of essential health services: management of post-abortion complications, safe termination of pregnancy, and provision of contraceptives. These services need to be timely, reliable, confidential, skilled and compassionate. They must be provided by people who have been properly trained.

MSF is working with its staff, with local communities and departments and ministries of health and other non-governmental healthcare providers to improve access to contraceptives, to post abortion care and to safe termination of pregnancy for women and girls lacking access to healthcare or caught in a humanitarian crisis.

"The woman has the freedom to decide whether she wants to be a mother at the moment."

Unwanted pregnancy and unsafe abortion have a serious medical impact on women and girls in the many low-resource and conflict-affected countries in which MSF works. The consequences are also felt by their families and friends, caregivers—including MSF staff—and their wider community. And, as a medical and humanitarian organisation, MSF remains committed to providing safe abortion care to reduce this avoidable—and often overlooked—suffering.

Instead of judgement, what a woman needs is health care that will respect the reason why she has come forward; ensure that she can talk with a trained professional; and provide her with high quality abortion care when she needs it. 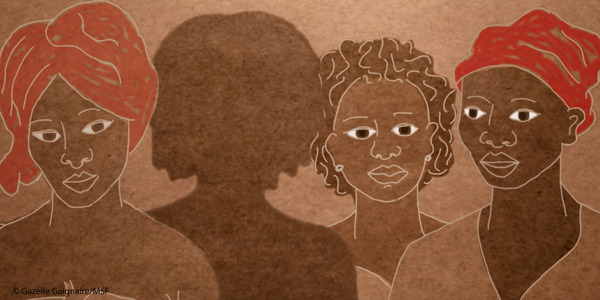